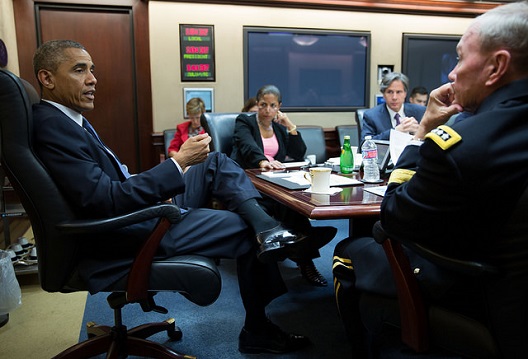 Of the many difficult questions Washington faces about the crisis in Syria, three are basic: what is the strategy of the United States for achieving President Obama’s objective of a negotiated political transition from rule by crime family to decent, pluralistic governance? Which elements of this strategy address that which Secretary of State John Kerry has identified as absolutely vital: changing the calculation of Bashar al-Assad? And what role does this strategy play in conjunction with a parallel—or perhaps overarching—strategy aimed at neutralizing the Islamic State in Iraq and al-Sham (ISIS, or Islamic State) in both Syria and Iraq? What, in short, does the United States want and how does it intend to get it?

Inside Syria a nationalist opposition beset by regime barrel bombs from one direction and Islamic State ground assaults from the other asks itself two questions: is the current abysmal state of affairs the intended outcome of US strategy or the result of a strategy that has failed? Outside Syria, the nationalist Syrian National Coalition asks a third question: has there ever really been a US strategy? Those fighting inside Syria and those trying to support armed nationalists from outside the country try to square the circle of a US president who asks Congress for $500 million to train and equip Syrian nationalist rebels and then casually, in an interview, dismisses the whole enterprise as a “fantasy.” They want to know, in short, what the United States wants and how it intends to get it.

Syrians are not the only ones who would like to have a clear answer to a straightforward question. Members of Congress, horrified by a humanitarian abomination and alarmed by the Assad regime-abetted terrorist threat posed by ISIS, want an answer that makes some sense to them. Administration officials in the departments and agencies charged with developing strategic options and then implementing the one chosen by the president need the broad parameters within which to think and plan. Military planners trying to put flesh on the bones of a $500 million appropriation request need a crisp statement of intent from the commander-in-chief.

None of this means to imply that the answer to the question—what does the United States want and how does it intend to get it—will arrive in the form of a single silver bullet or a simple panacea. Indeed, that approach was tried when the administration convinced itself that Russia would persuade Bashar al-Assad—borne aloft by Iranian-provided foreign fighters—to step aside as a result of talks in Geneva earlier this year. That was distilled fantasy, the most wishful of thinking. An actual strategy aimed ultimately at eliminating both the Assad regime and ISIS from the Levantine stage would involve some heavy and sustained diplomatic and security assistance lifting across a broad range of allies, friends, partners, and adversaries.

One potentially positive outcome of Washington’s longstanding disinclination to think or act strategically with respect to Syria would be a decision by the nationalist opposition to take the initiative. Until recently, US policy heavy in rhetoric and rich in symbolism encouraged regime opponents to think that the United States would take the lead in organizing the campaign to secure Assad’s removal: the goal set by President Obama in his August 18, 2011 speech.

Washington’s decision in December 2012 to recognize the Syrian National Coalition as the legitimate representative of the Syrian people was a particularly flamboyant gesture. Surely even strategic communications experts understand that if legitimacy is to be earned as opposed to conferred, the critical venue will not be Paris, London, Istanbul, or even Gaziantep. It has to be earned inside Syria. Yet—unless a Levantine Bay of Pigs is an acceptable outcome—a Syrian National Coalition governing authority inside Syria would need robust military capabilities to prevent being strangled in the cradle by some combination of the Assad regime and ISIS. The logical, reasonable implication of the December 2012 announcement was that Washington would organize its allies, friends, and partners to assemble the requisite support—especially security—for the Syrian Opposition Coalition to enter Syria on an agreed date and cease operating as an exile organization. Yet logic and reason have been notable by their absence.

If the recognition announcement of December 2012 is to be seen by history as anything less than the emptiest, most cynical of gestures, then the Syrian Opposition Coalition must take the initiative in devising a strategy to enter Syria, link up with local governing committees, and gradually bring good order and discipline to the myriad, quasi-connected or unconnected armed formations sharing the name “Free Syrian Army.” What is inescapable, however, is the role Washington would have to play in supporting an initiative it set in motion—intentionally or not—by recognizing the Syrian National Coalition as the legitimate representative of the Syrian people.

If, for example, the Coalition were to establish itself in northern Syria, its associated military elements would need—among other things—the means to neutralize regime military aviation and ISIS ground forces. Many of those means could be provided through arms transfers and training. If Washington actually involves itself operationally in this process, it will find regional partners more than willing to do much of the requisite work. Indeed, there may be more than one regional power willing militarily to help defend the Coalition directly if the United States blesses the undertaking and stands willing to respond lethally if either the regime or ISIS direct violence across borders. If the Coalition inaugurates an actual government on Syrian territory Washington, the balance of the London 11, and perhaps most of the states represented in the UN General Assembly will have the opportunity to recognize it and end the embarrassingly disgraceful situation of recognizing Bashar al-Assad as the President of the Syrian Arab Republic.

All of these steps, obviously, would be components of a US strategy aimed at achieving specific objectives. Nearly three-and-a-half years into the Syrian crisis, an official, presidentially blessed US strategy for Syria still awaits a drafter. Perhaps an opposition that has waited for an objectives-based strategy to appear can actually provoke its appearance. Yet now such a strategy must also address an ISIS phenomenon transcending Syria. This is not—nor has it ever been—a matter to be consigned to strategic communication and public relations. President Obama must commission and empower the professionals to get to work.