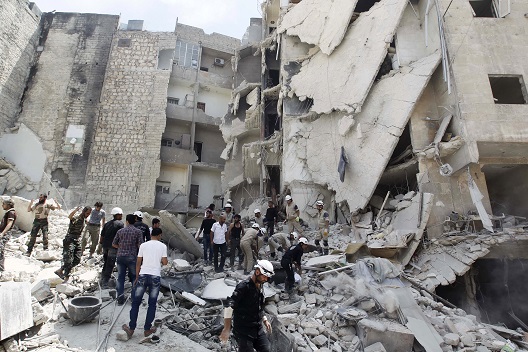 President Barack Obama’s West Point commencement address seemed to signal, albeit ambiguously, a new direction in US policy toward Syria: one in which “the president will seek the support of Congress in arming, training, and equipping Syrian rebels.” But not so fast. In a subsequent background briefing an unnamed senior administration official said that what the president really has in mind is a “discussion with Congress about the potential for there to be a role for the US military” in providing assistance to the armed opposition. The president, said the senior official, wants “to consider whether an approach that involves the US military could add” to the ability of the United States to “increase support to the opposition, but that “wherever we land in terms of those discussions,” it should fit into a broader strategy involving partners and allies.

Members of the press found it hard to suppress incredulity. “Has the administration made up its mind what it wants to propose yet?” “So what do you say to them [critics] [who say] that this whole notion of coordinating and dialogue is just delaying?” “Is there a sense of urgency here?”

Clearly, there is no sense of urgency. According to the official, discussion and dialogue with Congress “will be an ongoing focus for us as we head into the summer.” There is, according to the official, a “separate question of simply what additional authorities might be necessary for the US military to participate in our efforts. And that’s the question we’ll be pursuing in the coming weeks.”

Can it possibly be true that, well over two years into the thorough militarization of the Syrian crisis, the Obama administration lacks the requisite knowledge about pertinent legal authorities that would govern a Department of Defense role in arming, training, and equipping selected elements of the Syrian opposition? Is it possible that it has no firm view, at this late date, of whether such a role could add horsepower to US assistance efforts?

In his post-speech interview with National Public Radio, the president sought to clarify matters a bit:

Yet given what has “always been” the issue, how is it that the President of the United States does not have, by May 2014, a firm view he can set forth in plain language? Why, more than three years into the Syrian conflict, is the potential role of the Department of Defense in supporting the Syrian opposition being characterized as a question someone just dropped in the president’s inbox?

One hypothesis making the rounds in Washington was that President Obama was indeed prepared to say, very explicitly, that he would ask Congress for authority to employ the Defense Department in an arm-train-equip program, but that media leaks in advance of the West Point speech infuriated the president and his aides and inspired them to change the text. One hopes this was not the case. Governing effectively does include trying to master the message and maintain internal discipline—but it is so much more than that. It starts with knowing what one wants and building the support it takes to implement a carefully thought-through plan; it centers on the doing of actual things, not the speaking of words.

Arguments can be marshaled pro and con on the matter of whether Syrian nationalists should receive significantly enhanced US lethal assistance, and who is best equipped to do it. What is not acceptable—given the horrendous situation in Syria—is that the executive branch of the United States Government should approach this issue now as a summertime leisure activity.

Referring to the “moderate opposition,” President Obama told NPR, “But creating a capacity for them to hold ground, to be able to rebuff vicious attacks, for them to be able to also organize themselves in ways that are cohesive—all that takes, unfortunately, more time than I think many people would like.”

Leave aside the fact that an unconscionable amount of time has slipped away with basic questions on US interests, objectives, and strategic options still unanswered by the administration. Set to the side the disparity between thinking about helping someone “hold ground” while adversaries aim and act to help a criminally brutal regime obtain military victory. Ignore the repeated building up and tearing down of straw men: “I did not think then and I still do not believe that American military actions can resolve what is increasingly a sectarian civil war…” Set all of that aside. Is it really too much to ask of the administration that it place before the American people and Congress a specific, clearly articulated, action-oriented, operationally literate plan to build—in conjunction with allies and friends—a military force capable of defending Syrians and ultimately prevailing? If this is what President Obama really wants for Syria, then it is not too much—even at this late date—to ask.

Image: Civil Defense members, rebel fighters and civilians search for survivors at a site hit by what activists said was a barrel bomb dropped by forces loyal to Syria's President Bashar al-Assad in al-Qarlaq neighborhood of Aleppo May 29, 2014. (Photo: REUTERS/Jalal Al-Mamo)