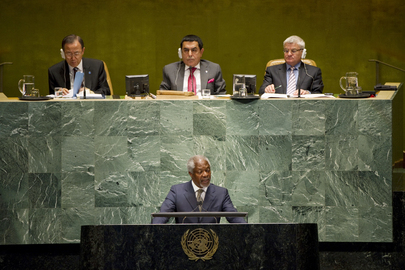 As preparations continue for an international conference aimed at jump-starting intra-Syrian negotiations to be held in Geneva in mid-June, the prospective value of the initiative is increasingly in doubt. Bashar al-Assad is making it clear to the news media that he intends to stay on and run for president in 2014, something that cannot happen if the June 2012 Geneva formula is implemented faithfully and accurately by Syrian negotiators. And the Syrian opposition seems to be using the prospective talks as an opportunity to showcase dissension and division. One must wonder if we are witnessing yet another paradox of Syria’s long march to national suicide: that the prospect of negotiations aimed at peaceful transition actually brings out the worst in all concerned.

The decision of Secretary of State John Kerry to try to raise from the dead the P-5 Geneva formula for Syrian political transition had a strong element of spontaneity. Yes, it accorded with President Barack Obama’s desire to avoid military involvement in Syria in favor of a negotiated settlement. And yes, it kept United Nations and Arab League Special Representative Lakhdar Brahimi very much in business, even as the veteran Algerian diplomat contemplated resignation. Still, it is unclear whether this initiative a part of a broader US strategy toward Syria.

The strategic theme of the United States is clear enough: compel Assad to accept political transition talks that would replace incompetent, corrupt, arbitrary, and abusive family rule with a transitional national unity ruling mechanism. Yet is it remotely possible, at this late date, to believe that anything other than the regime’s perceived certainty of military defeat will change Assad’s calculation?

Russian pressure on its client, even if forthcoming, might influence matters on the margins. Yet Moscow’s decision to discover the sanctity of binding contracts with regard to arms for Assad (when it has not hesitated in the past to suspend politically inconvenient business undertakings) should speak volumes about Russia’s position. President Vladimir Putin intends to keep his client in power, no matter the chitchat about Moscow not being wedded to particular figures and no matter the cost to Syria and its neighbors. Putin seems to calculate he can ride Iranian and Hezbollah foreign fighters in Syria to victory in a proxy war he is fueling.

What then is the state of US administration deliberations with regard to changing Assad’s calculation?  Is the United States ready to coordinate and oversee the process by which all assistance—lethal and nonlethal—to the armed Syrian resistance either goes through, or accrues to the credit of, the Supreme Military Council?  Has the United States determined who, in terms of vetted Free Syrian Army units, needs what and how to get it to them, irrespective of whether or not arms and equipment come from US stocks? Have the requisite understandings been reached with prospective suppliers and logistical players? Is Major General Salim Idris of the Supreme Military Council getting the technical assistance he needs to build an organization able to channel materiel to units willing to respond to his direction?  Is the United States at the point where all that is required is a presidential decision to proceed?

One hopes that such operationally consequential work is underway, as opposed to the desultory discussions and paper writing that often characterize the administration’s response to the catastrophe that is Syria. Senior White House national security staff and the president himself should be driving the needed decision making processes with dispatch. No serious strategy could allow the prospects for the planned political transition negotiations to rest on the good offices of Moscow and the benign intentions of Bashar al-Assad.

One hears, however, that there is no sense of urgency in the White House. The president’s skepticism about all things Syrian has been well documented and well articulated. It is also fully understandable and has the support of commentators who believe that doing what it takes to try to change Assad’s calculation will either not work or somehow make the worst situation imaginable (that which stares us in the face) even worse. But either the objective of a negotiated, complete political transition is serious or it is not. And either there is a practical, implementable strategy to compel the Assad regime’s cooperation with that objective or there is not. If the objective is real and the strategy exists, then somehow the Kerry initiative to revive the Geneva agreement must fit into it.

Surely the conference initiative does not aim to splinter the opposition, or lock in Assad’s current calculation, by deferring the requisite presidential decision to take the lead in organizing and overseeing external support for the Supreme Military Council and the military chain of command it wishes to establish. Yet care must be taken to ensure these are not the inadvertent results. The United States can influence, but not control, the Syrian opposition. Some in the opposition see the prospect of an international conference as an opportunity for personal advancement at the expense of rivals; they are demanding the magical disappearance of the Assad regime as a precondition for showing up in Geneva and denigrating the patriotism of others in the opposition who want, for the sake of their suffering countrymen, to give diplomacy a chance. Taking a decision about support for the Supreme Military Council, however, is something Obama controls. If he truly wishes to inspire recalculation on the part of the Assad regime, he will issue a positive decision now, nearly a year after he decided to the contrary. If it means there will be no June 2013 meeting in Geneva, so be it. Changing calculations will likely require more time and additional inducements in any event.

Convening a productive forum in three weeks time will, in any event, prove to be somewhere between impossible and undesirable unless the Assad regime takes de-escalatory steps starting now. There are tens of thousands of political prisoners to be released. There is a wide-ranging and merciless terror campaign against populated areas to be halted. There are orders permitting the United Nations humanitarian assistance apparatus free access throughout Syria to be issued. Yet in an interview with an Argentinian newspaper published online this weekend, Assad referred to his armed opponents as terrorists, the kinds of people with which "no state" (presumably referring to the feudal rule of his family) talks. Assad’s precondition for negotiations is that his opponents disarm. This does not bode well for the prospect of him doing the kinds of things Kofi Annan and Lakhdar Brahimi implored him to do in order to give negotiations a chance to succeed.

The Geneva initiative may well be the secretary of state’s diplomatic version of football’s desperate, last second, Hail Mary pass, rather than an integral part of a broader US strategy. He may turn out to be the very best kind of diplomat: the lucky kind. Should his good luck produce the result sought by the P-5 in June 2012, the beneficiaries will be 23 million Syrians and all of their neighbors. But a rational plan B would involve pulling the plug on this high risk venture absent any indication of regime seriousness. Indeed, plans A and B both need to address the challenge of confronting the Assad regime with the perceived certainty of military defeat. Otherwise the talk about changing the regime’s calculation toward peaceful political transition is no more than talk, and is certainly not a strategy.

Frederic C. Hof is a senior fellow of the Rafik Hariri Center for the Middle East at the Atlantic Council and the former special advisor for transition in Syria at the US Department of State. Photo Credit