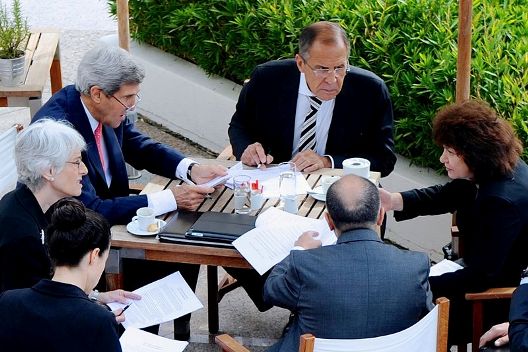 We came together this morning, and we are planning for a Geneva II conference next week for a simple reason: because there is no military solution to the violence that has displaced millions and taken more than 130,000 lives. There is no other alternative to ending this violence and saving the state of Syria than to find a negotiated, peaceful outcome. Secretary of State John Kerry, Paris, January 12, 2014.

In his remarks with Qatari Foreign Minister Khalid bin Muhammad al-Atiyah following the London 11 Friends of the Syrian People core group meeting in Paris, Secretary of State John Kerry made several important comments about the Geneva Conference on Syria (Geneva II) to be convened in Montreux, Switzerland on January 22. He characterized Geneva II as the start of a process aimed at “ending the Syrian conflict through a negotiated transition.” He addressed Syria’s humanitarian catastrophe, pointing out the “urgent need of the Syrian regime to implement its obligations,” drawing attention to the barbarism of the regime of President Bashar al-Assad and characterizing its murderous practices as “a challenge to the conscience of every person on this planet.” He expressed confidence that “the Syrian opposition will come to Geneva,” noting that the conference is “a test of the credibility of everybody.” He pushed back against the notion that a policy of simply increasing aid to refugees will suffice, and noted that there has been no substantive exchange with Iran on Syria to date. And he warned that “No one should write cynically about Geneva II somehow failing if it doesn’t come out on day one or day two or day three with a full agreement.”

As usual Mr. Kerry’s rhetoric was coherent and even soaring. It has been so since the beginning of his incumbency as secretary of state. At the very outset he spoke the unvarnished truth: Assad’s calculation would have to be changed before the head of Syria’s criminal clan would take negotiated political transition seriously. Anyone listening to Kerry in the wake of the August 21, 2013 Assad regime chemical atrocity knew for sure that the military might of the United States was about to come down hard on the regime’s tools of mass terror: its artillery, aircraft, rockets, and missiles. And now he asserts that because there is no military solution to the Syrian crisis—itself an assertion which only the United States and its Western allies seem to take seriously—a process to be launched in Switzerland next week is the only alternative to ending violence and saving Syria.

Geneva II is indeed what some Western officials privately admit “the only game in town” with respect to Syria. This, however, is the product of American diplomacy that settled for a straight-up swap: the punitive military strikes that could have produced immediate humanitarian relief for Syrians were traded away for an agreement that would remove Syria’s chemical weapons. Assad took this to mean he was free to use his Russian-supplied weaponry as he wished, provided he refrained from using chemical munitions. The result has been an ever-escalating assault on civilian populations; cascading war crimes and crimes against humanity producing results indistinguishable from genocide. With the credible threat of military strikes gone and the Assad regime employing Iranian-raised foreign fighters to complement its terror campaign, Geneva II emerged as the best friend for political leaders otherwise clueless about how to respond to the cynical brutality of the Assad regime. It offered the image of doing something. And yet “the only game in town” is not synonymous with “no other alternative.”

If the lives of 23 million Syrians were truly the top priority of those statesmen planning to convene a new Middle Eastern peace process, one could expect to hear the following from the United Nations Secretary-General any moment now: “In view of the ongoing slaughter inside Syria, I am putting on hold the convening of the Geneva Conference on Syria until I can confirm that the Syrian government has granted full, unfettered access to United Nations humanitarian agencies and personnel, and that those agencies and personnel are indeed entering areas that have been subjected to shelling, bombardment, and starvation and are delivering aid free of interference from Syrian authorities.” It would then be up to the regime and its enablers—Iran and Russia—to do what has to be done to establish the proper foundation for Geneva II. Failure to act could demonstrate to the West that the abandonment of an alternative to Geneva may not have been wise, and that its resurrection may be necessary both to save lives and to enable real diplomacy.

Ideally Geneva II would commence on January 22 with a humanitarian truce substantially in place: one characterized by full United Nations access to all parts of Syria. Recent military reverses suffered by the Assad regime’s opponent of choice – the transnational jihadi group ISIS—might facilitate United Nations access in eastern Syria. Still, the permission of a regime that rules what is still recognized as the Syrian Arab Republic Government would be required. If Iran and Russia cannot oblige their client to do the minimally decent thing, why should they be expected to do anything useful in the context of Geneva II’s mission: political transition?

Less-than-ideally, Geneva II will convene next week with the Assad regime still defying the United Nations. John Kerry and his colleagues envision a process several months in length. He is correct in warning that there will be no near-term breakthrough on political transition. A regime that believes it is winning militarily with the help of reliable allies is not a regime likely to agree to step aside. Over the course of the next several months the United States and its allies will again be faced with the proposition set forth by Mr. Kerry nearly a year ago: for the Assad regime genuinely to engage diplomatically in a political transition process consistent with the Geneva Final Communiqué of June 2012, its calculation will have to change. A regime whose entire calculation is based on a ground truth produced by military operations will not likely change that calculation until the military momentum shifts against it. Unless Western policies seeking to escape the inescapable change, Geneva II will end up as a powerful lung, breathing oxygen into a regime that simply will not accept the assertion that there is no military solution.

Near-term there are indeed good things that can result from the launch of this process. By far the most important would be the start of a sustained humanitarian truce. Another pertains to the Syrian opposition.

If the United States and its allies put their collective diplomatic backs into relentless pressure on the regime and its allies to accept and implement full United Nations humanitarian access, then history will record that the Geneva II initiative saved lives and, at the very least, mitigated the signature humanitarian abomination of the early 21st century. There is literally nothing more important than bringing relief to the people of Syria. Even those Western leaders who demonstrate precious little agony or passion over what it happening to Syrians ought to be able to grasp that which was obvious to Kofi Annan in June 2012 when he insisted that his six-point de-escalatory plan be embedded in the Geneva Final Communiqué: there can be no negotiation capable of producing anything but bile and recrimination so long as human beings are being targeted for terror, trauma, injury, and death.

For the Syrian National Coalition, rejecting Geneva II is unthinkable. Yes, there are dangers. If the United States and its allies come to Geneva with the attitude of disinterested, even-handed, “we really don’t have a stake in the outcome” mediators, the opposition delegation will find itself alone facing the regime and Russia. If the regime’s terror campaign continues to serve as a backdrop for diplomatic proceedings in Switzerland, the Coalition will find itself facing withering criticism from those it considers constituents. Yet there is also opportunity. Geneva II is the chance for the opposition to reintroduce itself to the people of Syria and to the world. Because the subject matter of Geneva II—the only subject matter that counts—is political transition, the Coalition-led delegation has the opportunity to present, at long last, the long-awaited alternative to rule by criminal clan. It should present and unveil publicly a transitional governing body roster reflecting excellence, experience, diversity, and decency: one top-heavy with the names of those who have served with distinction, honor, and patriotism as civilian officials and military officers.

Longer term, a Geneva process aimed at producing actual political transition will require Western policies aligned with reality instead of hope. Even in the near-term, however, positive things can happen. What is required, however, is for Western actions pre-Geneva and at the conference itself to reflect the strength and coherence of John Kerry’s rhetoric.