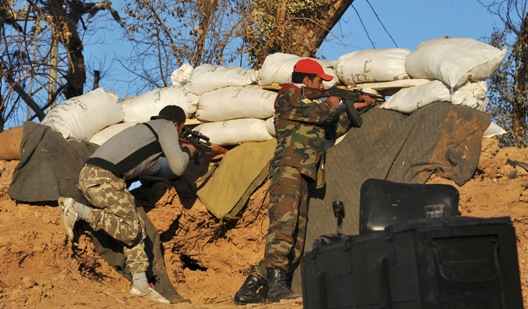 As fighters from the Islamic State of Iraq and Syria (ISIS) prepared to march towards Baghdad on Friday, the often fragmented forces of Syria’s opposition formed a coalition to ward off the group’s anticipated expansion into the east.

Analysts say opposition forces who once battled each other for control of Raqqa, Deir Ezzor, and Hassakeh provinces are mobilizing in response to ISIS gains, with the creation of new alignments between Jabhat al-Nusra, the Islamic Front, and Kurdish armed units—in effect, a team of rivals. The emerging coalition could also involve tribes in the east, some of which have close ties to Saudi Arabia.

A rebel coalition is not the only factor that could slow the group’s push into Deir Ezzor. As it expands its Iraq offensive, a march on Baghdad will take priority, potentially forcing a diversion of manpower from Syria. An estimated 7,000 to 9,000 ISIS members are currently fighting in both countries.

The march on Mosul and Tikrit has drawn hundreds of ISIS fighters away from Syria. Though the group is attracting an increasing number of foreign fighters from the West, Chechnya, and North Africa, it is still a finite number—one that will be stretched further if the Iraqi government stages a counteroffensive. While it has put a significant amount of resources into holding Raqqa and fighting Nusra and other groups in an attempt to control a wider swath of the east of Syria, ISIS still considers its Iraqi gains more important. It will maintain the bridge between the two countries, but its prioritization of Iraq could come as a detriment to its operation in Syria.

The spoils from this week’s Mosul surge will certainly boost the confidence of ISIS fighters in Syria as they move east, aiming to take over a broader swath of the country. They say the group is eyeing terrain from its stronghold in Raqqa to Kurdish-controlled Hassakeh, then on to the northern provinces of Idlib and Aleppo.

Whatever the short-term results of the battle, any long-term gains will depend on the international and Iraqi government reaction to the week’s events. A heavy military response that nips ISIS in the bud could mean the siege on Mosul results in a positive outcome for the group’s Syrian rivals. But a timid approach, as has been the global community’s wont with Syrian extremists, would simply give ISIS the leeway to consolidate their gains.

Western powers would do well to launch a strong-armed response. The international actors on Syria, including the United States and Iran, are united over the ISIS crisis. Should this week’s events promote a major assault by the Iraqi military or US airstrikes, it could cause severe damage to ISIS on both sides of the border. It could also encourage the West to send more weapons and support to non-ISIS rebels in Syria. Arming moderate groups, however, will not be enough. To fight a group like ISIS, one needs the power of the state. Syria’s rebels—especially those aligned with the West—have had to cope with major capacity constraints, struggling to maintain a cohesive force on the ground.

But for the Syrian regime, it’s been an easier week. Assad stands to gain from this fresh round of rebel infighting. ISIS is not a military factor in Idlib, Latakia or western Aleppo, where the Syrian army has focused its offensives. The only real contact between the two sides is in eastern Aleppo and in Deir Ezzor. The government will be happy to let the rebels fight each other, weakening Nusra, the Islamic Front, and other anti-regime factions. For ISIS, fighting the government represents minimal strategic value, whose focus continues to be the consolidation of its territorial control and fighting other rebel forces.

Assad’s most important ally, Iran, is likely to intervene through Prime Minister Nuri al-Maliki and the Iraq government, rather than asking Assad—who they know has his hands full fighting in the south and holding Damascus—to do anything substantial.

Karen Leigh is the managing editor of News Deeply. A version of this post first appeared on SyriaDeeply.org.