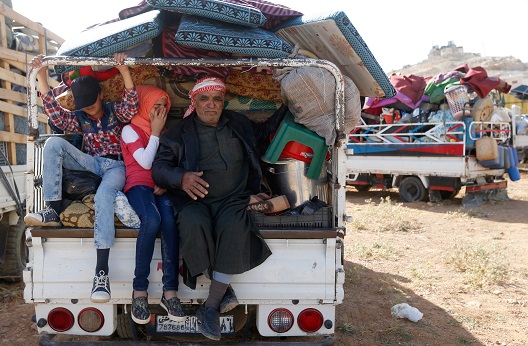 This June brought significant news about Lebanon’s policy towards the Syrian refugee crisis. For the first time, Lebanese government officials confronted the United Nations High Commissioner for Refugees (UNHCR) over its policy on the repatriation of Syrian refugees. On June 8, the Lebanese Foreign Minister Gibran Bassil ordered a freeze on the renewal of residency permits for UNHCR staff, accusing the UN agency of discouraging Syrian refugees in Lebanon from returning to Syria. In an official statement, the Lebanese Foreign Minister threatened to take “further measures” against UNHCR. Bassil explained that the Lebanese government does not have the patience for the crisis to be drawn out. “We want it to be short. Their (UNHCR) policy is to forbid the return (of Syrian refugees), the Lebanese policy is to encourage return.”

The incident that triggered the recent escalation with UNHCR relates to a group of 3,000 Syrian refugees living in the Lebanese town of Arsal who intended to return to Syria. The refugees were interviewed by UNHCR staff, as part of standard procedures, about the conditions they might face in their country, including the possibility of them facing military conscription, other security problems, and poor accommodation, which the Lebanese Foreign Minister saw as a procedure that aims at deterring refugees.

Almost one million Syrian refugees are currently registered with UNHCR in Lebanon, with estimates closer to 1.5 million. UNHCR suspended registration of incoming Syrian refugees in May 2015, according to instructions by the Lebanese government. The UN agency does not promote or facilitate refugee returns to Syria under the current circumstances, and has repeatedly warned against “a premature return.” The purpose of interviews conducted by UNHCR staff with refugees is to make sure that they have accurate information, and are making their decisions voluntarily.

Over the past six years, Lebanese policymakers have largely argued against hosting Syrian refugees long term, and instead advocated for their expedited return. The question of what to do with Syrian refugees topped the political agenda during the Lebanese parliamentary elections, held in May 2018. Just before the elections, President Michel Aoun called on the United Arab Emirates, Saudi Arabia, and Egypt to intervene in the Syrian refugee crisis and facilitate their returns to Syria. In April 2018, Foreign Minister Bassil also formally rejected  the outcome of the “Second Brussels Conference on Supporting the Future of Syria and the Region,” because the joint declaration focused on the voluntary return of refugees and the need to ensure effective protection of refugees against risks of forced evictions and returns.

The latest confrontation between the Lebanese government and UNHCR further escalates current tensions surrounding the presence of Syrian refugees. Lebanon adopted restrictive policies, in addition to hostile rhetoric, aimed at making the lives of Syrian refugees difficult and discouraging their stay in Lebanon. In 2015, Lebanon suspended a bilateral agreement that guaranteed the freedom to live, work, and conduct economic activities for citizens of Syria and Lebanon since 1993, and instead implemented a set of restrictions in order to limit the entry of Syrian nationals into Lebanon. Also, Lebanon does not legally acknowledge the refugee status of Syrians and requires visas for all Syrians before entering Lebanon.

Not only are there physical and legal barriers to enter Lebanon, but also to enter its job market. Syrian refugees are restricted to only three job sectors: construction, agriculture, and cleaning. Work permits are not easy to obtain, as they require a Lebanese sponsor and the payment of a large sum of money. Also, obtaining a work permit comes with the risk of losing UNHCR benefits and aid. The lack of access to the job market is a crucial aspect of how difficult it is for Syrian refugees to sustain themselves. According to UNHCR figures, 75 percent of Syrian refugee households were unable to meet basic needs of food, health, shelter and education in 2017. Moreover, 77 percent of female Syrian refugees, and 66 percent of male Syrian refugees, faced verbal harassment. As a result, living conditions for Syrian refugees in Lebanon are dire.

Last April, Human Rights Watch issued a report about the “mass eviction” of Syrian refugees from their homes in Lebanon between 2016 and early 2018. Human Rights Watch found evidence that measures have been directed exclusively at Syrian citizens by Lebanese municipal authorities, and not at local nationals or other foreign citizens. Lebanese authorities claimed the evictions were based on housing infractions. Additionally, UNHCR reports show evictions for about 13,700 Syrians from their homes in Lebanon in 2017 alone. While this figure is not significant compared to the total number of Syrian refugees in Lebanon, it is still significant in terms of what it symbolizes for Lebanon’s policy: Syrian refugees are no longer welcome.

Despite harsh living conditions and sporadic incidents of deportation, a policy of mass forced returns of Syrian refugees has never been on the table. In February, Prime Minister Saad al-Hariri clearly stated that Lebanon will not force Syrian refugees to return: “Nobody is going to force anybody to go back if they don’t want to go back.” However, the Foreign Minister’s statements and the confrontation with UNHCR indicate that the Lebanese government may not be in agreement on this policy. It appears Lebanon may be close to shifting its policy from “discouraging Syrians from staying in Lebanon” to “pushing Syrians out of Lebanon.”

Pushing the return of Syrian refugees would be a violation to the core principle of the international humanitarian law on non-refoulment of refugees. Article 33 (1) of the 1951 Convention relating to the Status of Refugees states that: “No Contracting State shall expel or return (‘refouler’) a refugee in any manner whatsoever to the frontiers of territories where his life or freedom would be threatened on account of his race, religion, nationality, membership of a particular social group or political opinion.” While Lebanon is not a signatory of the 1951 convention, international consensus has been considering non-refoulment among the norms of customary international law.

At the same time, Lebanon is understandably suffering from “refugee fatigue.” A small country with around six million people is hosting the equivalent of one sixth of its population. Lebanon currently has the most refugees per capita in the world. Long before the Syrian refugee crisis, Lebanon hosted generations of Palestinian refugees over sixty years. In between, Lebanon suffered its own civil war for two decades, with the Palestinian question at the heart of this civil war. Lebanon has a history of overstretching its resources to host refugees, as well as of being a victim of other people’s wars.

These all are legitimate concerns for Lebanon. However, the answer to these problems cannot be pushing Syrians back into Syria. So far, there has been little to no reason to believe that conditions in Syria have improved for the safe return of refugees. Numerous indicators tell us that a viable scenario of a voluntary, safe, and sustainable return for millions of Syrian refugees does not exist at the moment. Moreover, the ongoing military campaign by the Assad regime and Russia in southern Syria led to the displacement of 320,000, now trapped at the borders between Jordan and the occupied Golan Heights. The Norwegian Refugee Council described this new wave of displacement as “the largest ever” in the Syrian war.

Lebanon, as well as other neighboring countries and the international community, needs to accept that Syrian refugees are not going anywhere any time soon. All parties need to prepare to deal with the Syrian refugee crisis for years to come. A new way of thinking is needed to deal with the current situation. A practical starting point is for the international community to acknowledge Lebanon’s concern—and other host countries—and to provide necessary economic support to make the burden of hosting hundreds of thousands of refugees bearable.

Hanan Elbadawi is an independent writer and analyst, experienced in humanitarian issues and Arab affairs. Most recently she worked as the founding manager of the Program on Refugees, Forced Displacement and Humanitarian Responses at Yale University. Follow her at @HananElbadawi.