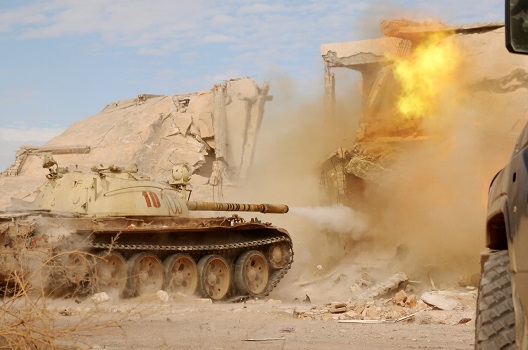 In December 2016, ISIS was ejected from Sirte by a coalition of forces allied to the UN-backed government. US airstrikes and special operations by western forces were integral to the campaign and, combined, provided the tipping point. This article proposes three tactical lessons from the campaign – which, of course, contain within them strategic implications.

It is important to note that ISIS has, by no means, been eradicated in Libya, with reports suggesting that there are regrouping efforts south of Sirte, in Bani Walid, and also westwards, towards the Algerian border. Furthermore, although there are signs of a return to normalcy in Sirte, with power and fuel back online and the hospital under decontamination works, a series of threats remain: from IEDs, from booby traps, from criminal activity, from the rise in the smuggling of power cables, and from fighting between rival militia nearby.

No. 1: Reliance on local anti-ISIS militia is double-edged

While rival jihadist groups have occasionally pushed back against ISIS, the backbone of the anti-ISIS effort in Libya is formed by two competing coalitions: the Misratan brigades, who acting under the umbrella group of Banyan al-Marsus were undeniably the driving force behind the campaign to eject ISIS from Sirte and formed the bulk of the 712 casualties; and General Hiftar’s LNA, which has arrested and clashed with a number of extremists in eastern Libya, including ISIS, and articulates its core mission as fighting terrorism.

However, the Misratan forces were only motivated to advance on Sirte after two ISIS suicide bombings struck them in Abu Grein, a village situated roughly halfway between Misrata and Sirte. The audacity of those attacks, which suggested ISIS planned to extend its influence westward, mobilized the Misratans. Previously, there was no committed ideological opposition to ISIS and some Misratan factions were linked to jihadist groups in the east. Even now, Misratan forces are riven by differences over whether to support the UN-backed Government of National Accord, with some factions claiming that the GNA is a plot to install Haftar in Tripoli.

For his part, Haftar has taken an uncompromising line against jihadists, earning the admiration of likeminded anti-Islamist strongmen such as Abdel Fatah al-Sisi and Vladimir Putin. However, despite great efforts to universalize his cause, through the nomenclature of the ‘Libyan National Army’ and by claiming that “we are now defending the entire world”, Haftar represents a highly particularized agenda. His political support base scarcely extends beyond the distinctive eastern region, and even there he remains a problematic figure, especially given his past links to the Qaddafi regime and his ongoing iron-fisted policies against ‘Islamists’ of any stripe.

As in Iraq and Syria, the frontline against ISIS in Libya is dominated by non-state actors pursuing competing goals and ideological visions. These centrifugal forces inevitably complicate the larger war against ISIS and like-minded groups, which must be predicated on unity and peacebuilding.

Furthermore, abusive behavior by these groups ensures that, for every step forward on the battlefield, the anti-ISIS coalition is consigned to taking two back in the larger war. Misratan militia are now back in control of Sirte– and it is worth recalling that ISIS was only able to make inroads in Sirte in 2014 after Misratan groups had run amuck in the city and then handed over the responsibility for security to ASL. Recent allegations of looting, property seizures and manhandling residents suggest things have come full circle. They also mirror the dynamic in Iraq and Syria, where anti-ISIS militia have long been accused by human rights monitors of committing severe abuses in areas they have sought to capture from ISIS.

Further still, mutual hostility between key elements of the anti-ISIS coalition risks precipitating a new conflict in Sirte. The coastal city remains on the front line between Misratan/Benghazi Defence Brigades (BDB) and LNA forces who are engaged in skirmishes around Sebha and positioned only 40km from each other, near Sirte. Indeed, the LNA’s air strike on a BDB base near Sirte on April 17 suggested that the conflict is nearing. As this fighting continues, it is ever more likely that other actors in the area will be pulled into the conflict, potentially igniting existing tensions between communities in the south and destabilizing the region. Moreover, on a fundamental level, these clashes and air strikes act as a barrier to achieving reconciliation through political dialogue—all of which combine to create the neat opening for an ISIS revival.

No. 2: A light and targeted western military footprint Is effective

In the battle for Sirte, US air strikes enabled anti-ISIS forces to pick up momentum against well-entrenched ISIS positions. When progress had stalled in the summer of 2016, the launch of AFRICOM’s Operation Odyssey Lightening and introduction of US air power was game-changing. In November, when ISIS fighters sheltered in well-defended enclaves, intense US air strikes proved decisive. At the conclusion of Operation Odyssey Lightening, AFRICOM announced that it had conducted a total of 495 precision airstrikes.

On the ground, it would seem that the small number of American and British Special Forces fielded to Misrata were critical to the breakthroughs made in the Sirte offensive. According to senior NATO officials, the deployment of fewer than 400 Western personnel to liaise with anti-ISIS militias during their fight against ISIS drastically improved their capacities for reconnaissance, battle planning, surveillance, and mopping up.

It is important to note that with better timing US air strikes could have ended the campaign much sooner, resulting in less damage to critical infrastructure and fewer casualties.

Certainly, the initial advance towards Sirte by Misratan forces was swift, but there then followed a two-month period during which ISIS was not under significant pressure in central Sirte. Misratan planes attempted to provide air support, but ISIS fighters remained comfortably ensconced in their strongholds around the Ouagadougu Centre, Ibn Sina Hospital, and Sirte University. They were afforded time to dig in and create tunnels, re-supply, plant booby traps, mobilize vehicle-borne IEDs, and extra space for key commanders to flee. As the Misratans hit a wall, the head of the UN-backed government requested US air power, and ISIS militants were rapidly ejected from the key bastions of their rule in central Sirte.

The delay in demanding western air support reflects a clear lack of tactical planning within the anti-ISIS coalition whose national representatives, the UN-backed government, were being led by (mainly Misratan) factions on the ground. The Sirte campaign itself had been hastily improvised after Misratan leaders decided that the ISIS suicide bombings in Abu Grein were a step too far. Moreover, the Misratans were seeking to bolster their own positions with a ‘big win’ against ISIS, and would most likely have preferred to triumph in Sirte without outside help.

Indeed, it seems that any effective anti-ISIS coalition ought to be national rather than parochial, and political rather than purely military. As Western policymakers chart a course for the eviction of ISIS from its native strongholds in the Levant, it would make sense for their battlefield efforts to actively reflect a strategic, post-conflict solution for Iraq and Syria. The military track may contain the problem of ISIS, but only a national political track can solve it.

Dr Alia Brahimi is an academic specialist on jihadist ideology and strategy, author of Jihad and Just War in the War on Terror (OUP), and co-Founder of Legatus, a strategic advisory firm based in London.

Jason Pack is the founder of EyeOnISISinLibya.com, president of Libya-Analysis, and author of a forthcoming report with the Atlantic Council on the Origins and Evolution of ISIS in Libya.

Image: Photo: A military vehicle fires as fighters of Libyan forces allied with the U.N.-backed government push into the last area held by Islamic State militants in Ghiza Bahriya district in Sirte, Libya.