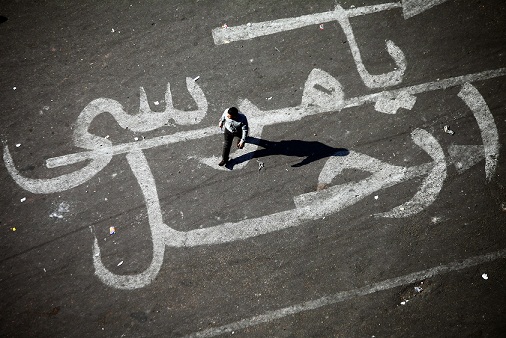 President Mohamed Morsi and the Muslim Brotherhood may have inadvertently accomplished for their opposition what they could not do for themselves in the past year. On Tuesday, members of virtually every revolutionary non-Islamist group filled Tahrir Square participating in a massive demonstration against the president’s constitutional declaration. Today, hundreds continue a sit-in in Tahrir, with another protest scheduled on Friday.

On Tuesday, marches that converged from different neighborhoods and syndicates onto the square featured banners from various parties, movements, and coalitions with the common goal of demanding the reversal of the president’s decision that granted him ‘dictatorial’ powers. The turnout was significant, with numbers much higher a similar protest following calls for demonstrations against the Constituent Assembly on October 19.

The scene and atmosphere were reminiscent of Tahrir during the revolution, with tents pitched in and around the square and ubiquitous Egyptian flags. However unlike the 18 days in Tahrir Square in early 2011, the Muslim Brotherhood and Morsi were the subject of most of the chants. Different groups with different priorities and goals found common ground in their opposition to a group they believe has dominated Egypt’s post-revolution political discourse.

The actions of the president and the Muslim Brotherhood are reflective of a group that constantly acts as if it is coming under threat, as it was for years under previous regimes. The Brotherhood has made it clear that it believes Morsi’s declaration was a necessary response to a perceived threat from the judiciary, and should be supported in order to maintain stability.

Aggressive political maneuvers, including deciding to run a presidential candidate and pushing for a constitutional declaration in the name of protecting the country from feloul, catalyzed an opposition that was disorganized, to put it mildly, going into the country’s first post-revolution parliamentary elections. Language calling for the need to ’protect the revolution‘ has lost its gravitas and appears to be nothing more than a futile effort to gain popular appeal.

The opposition grows stronger as it slowly dismisses the possibility that a president, who did not consult his advisors for democratic transition prior to issuing the controversial declaration, would promote an honest and open dialogue with dissenters. While Islamist groups openly advocate the need for consensus, they casually refer to their opposition as disloyal. In a statement on its website, the Muslim Brotherhood accused opposition parties of attempting to put the country "in a state of chaos as a prelude to toppling the elected regime and grabbing power."

In the same statement the Muslim Brotherhood added that "certain political leaders and their supporters did not realize the seriousness of the situation for the revolution."The language is not indicative of a ruling group that is keen to pursue honest and open dialogue and paints the opposition as a seditious force.

The Muslim Brotherhood and other Islamist groups on Wednesday announced a demonstration supporting the president on Saturday in Tahrir, where an anti-Morsi sit- continues, and where a second large-scale protest will be held on Friday. The Brotherhood’s plan contradicts its cancellation of protests on Tuesday in Cairo, in the name of "preventing polarization and bloodshed," and is reflective of a majoritarian attitude that seeks to justify their actions. The group’s natural response to a protest against a polarizing decree that they support is to respond with a larger demonstration to "prove" where the real numbers lie.

Anti-Morsi protests may not yield immediate results, but have galvanized a non-Islamist coalition that has come to fruition largely as a result of polarizing decisions made by the president, with the support of the Muslim Brotherhood.

Until those in power can respect the points of view of non-Islamist groups as more than unpatriotic and misguided efforts to sow seeds of sedition in the country, the consensus that both sides claim to seek will become increasingly unlikely.

And as long as political polarization continues to increase, the opposition will further unify. As the Muslim Brotherhood knows well, the majority has the upper hand in a democracy. However when that upper hand alienates many smaller groups, it risks losing its position to a larger group that emerges, bound together by that alienation.

Update: The Muslim Brotherhood announced its intention to change the location of its Saturday protest, while the Nour Party has announced its protest will take place at Cairo University.

Basil El-Dabh is a reporter for Daily News Egypt.