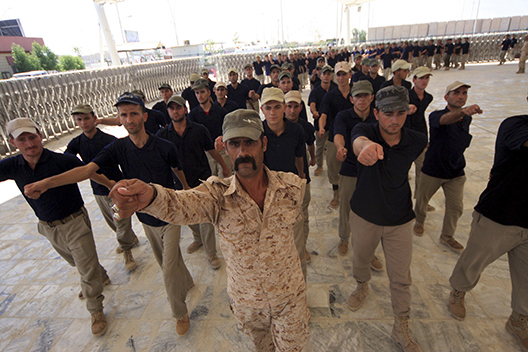 The international media often describes the city of Mosul, the capital of Ninawa province, as the Islamic State’s (ISIS) last remaining stronghold in Iraq. However, there is another major stronghold that may soon be a flashpoint between rival factions of the anti-ISIS coalition. In late October, Iraq’s Shia militias opened a new front in the military campaign against the Islamic State, aiming to liberate the city of Tal Afar, about 35 miles west of Mosul. The entrance of pro-government Shia militias—known as the Popular Mobilization Units (PMU)—prompted a Turkish warning that it may intervene to protect Sunnis in Tal Afar from potential revenge killings at the hands of Shia militia forces.

Falling a week after Mosul, the ethnically Turkmen city of Tal Afar was then the Iraqi government’s last remaining outpost in Ninawa province. Its population is difficult to assess given the violence and instability it has experienced since 2003, but most accounts place it between 100,000 to 200,000 before it fell to ISIS in 2014. Reports during the US occupation described the religious demographics of the city as 75 percent Sunni and 25 percent Shia, but this proportion before the ISIS takeover is also difficult to assess. Some residents of Tal Afar place the pre-ISIS balance as more evenly balanced between Sunni and Shia Turkmen.

Tal Afar has played a major role in the wars in Iraq since 2003. The city experienced cycles of sectarian violence between Sunni and Shia Turkmen well before the bombing of the Ali Askari Mosque in Samara in February 2006, which many analysts identify as the start of a sectarian civil war in Iraq. In 2005 to 2006, Tal Afar was the site of an attempted “hearts and minds” counterinsurgency—well before the introduction and implementation of the US “surge” strategy in which an additional 30,000 US troops were sent to Iraq in 2007. But US efforts to pacify relations between Sunni and Shia Turkmen failed to be sustained. For example, in the spring of 2007, two truck bombs exploded in a Shia area of Tal Afar, killing 83 Iraqis and wounding nearly 200. Soon after the bombings, according to the New York Times interviews with local leaders and witnesses, militias joined by Shia police officers from the city “went house to house in a Sunni neighborhood, dragged people into the street and shot them in the head.” Retaliatory violence left 70 dead.

Sectarian tensions continued from 2006 to 2014 through the reign of then-prime minister Nouri al-Maliki, who favored and empowered the Shia over the Sunnis in Tal Afar’s local sectarian balance. By the time Sunni insurgents swept through northern Iraq in June 2014, many Sunni Turkmen had joined ISIS and settled scores against their Shia counterparts. The Shia Turkmen who fled Tal Afar to Sinjar following the fall of the city to ISIS, were again forced again to flee by ISIS’s advance in Sinjar less than two months later. Today, many of ISIS’s most hardline Iraqi fighters and commanders hail from Tal Afar.

Grievances and retribution has led many Shia Turkmen to form and join militia forces within the Iranian-backed PMUs, and they now intend to take back Tal Afar. Today, with Shia militias moving towards Tal Afar, the cycle of revenge is almost fulfilled. There are Sunni fears that Iran—through its militia proxies—aims to cleanse Sunni Turkmen from Tal Afar, permanently altering its demographics, and those that fled their homes may be prohibited by Shia militias from returning.

Underneath the sectarian rivalries between Sunnis and Shias in Tal Afar, however, are strategic interests. By taking control of the city, Shia militias would cut off the road that connects Mosul to ISIS’s escape route into Syria. While that could be the tactical aim, the strategic goal may be anchored in the region’s geopolitics. As Martin Chulov of The Guardian reported in early October: “By not helping to retake Mosul, the militias are free to drive one of its [Iran’s] most coveted projects—securing an arc of influence across Iraq and Syria that would end at the Mediterranean Sea. The strip of land to the west of Mosul in which the militias will operate is essential to that goal.” That strip of land is Tal Afar and Sinjar, which would effectively connect the Iraqi land route to a Syrian one. There has been a good deal of suspicion among Kurds and Yazidis in Iraq that Tehran and Baghdad are cooperating with the Kurdish Workers Party (PKK)—designated a terrorist organization by Turkey—and its affiliate in Syria and Iraq to help consolidate a land corridor.

Last month, some observers in Washington initially downplayed Turkey’s threats to militarily intervene in Iraq as a bluff intended purely for domestic consumption, as Turkish President Recep Tayyip Erdogan continues to consolidate power in response to an attempted coup over the summer. But there is little reason to be confident that Turkey’s threats are empty, or that circumstances in such a dynamic environment do not create conditions that alter Ankara’s calculus to favor military intervention. “Tal Afar is a very sensitive issue for us,” Erdogan recently said, “We definitely do not regard it [Shia militia involvement] positively in Tal Afar and Sinjar.”

Indeed, Turkey’s threat to protect its ethnic kin in Iraq does play into Turkish nationalism and serves to advance Erdogan’s interests domestically. But Turkey’s foreign policy cannot simply be assessed through the lens of domestic politics alone; and its threats are not merely for domestic consumption. There are strategic implications at play in the war against ISIS, especially given that Iran aims to undermine Turkey’s sphere of influence in Iraq and near its own border by working with a domestic adversary, the PKK. Moreover, Turkey already has hundreds of its troops in Iraq, in direct opposition to Baghdad. Given these realities, Washington and Baghdad would be wise to bear in mind that all options for Turkey remain on the table.

There is room for competition given the multi-layered alliances and rivalries built into the political context underlying post-ISIS Ninawa. The security and political management of post-ISIS Iraq will be an enduring problem given the conflicting interests between armed actors on multiple dimensions.

Ramzy Mardini is a nonresident fellow at the Atlantic Council’s Rafik Hariri Center for the Middle East.

Image: Shi'ite volunteers from Tal Afar take part in a military training as they prepare to fight against militants of the Islamic State in Kerbala September 27, 2014. (Mushtaq Muhammed/Reuters)