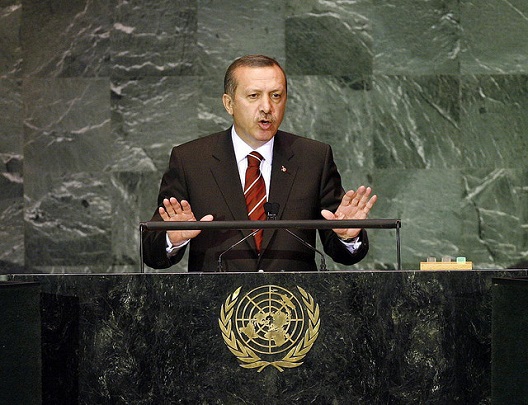 Over the past few weeks Turkey’s President Recep Tayyip Erdoğan has taken almost every possible opportunity to publically criticize the July 2013 coup that brought President Abdel Fattah al-Sisi to power in Egypt in place of Ankara’s hapless ally, Mohamed Morsi.

Addressing the UN General Assembly in New York on 24 September, Erdoğan questioned the very existence of the UN, when it “defends those who come to power not with democracy but with a coup.” He returned to the theme at a World Economic Forum event a few days later, saying, “A president elected with [a] popular vote was ousted through a military coup and the man who perpetrated this coup was declared the legitimate president afterwards … This man even addressed the UN. Is the UN a platform where perpetrators of coups can make a speech, for God’s sake?”

And he was at it again at the opening of the Turkish parliament on 1 October when he said staying silent in the face of events in Egypt “would be a denial of history and our ancestors, as well as of our own existence.”

The views of Erdoğan are hardly new, but Egyptians appear to be getting increasingly irritated by the constant criticism. In a statement issued on 29 September, the Egyptian Ministry of Foreign Affairs condemned the “series of exaggeration and lies peddled by the President of Turkey,” and questioned his own democratic credentials. A further statement on 1 October called Erdoğan’s remarks to the Turkish parliament “miserable and desperate”.

Some Egyptian commentators have gone further, calling for a boycott of Turkish goods and for Egyptians to stop visiting Turkey on holiday. To date, however, there has been little impact other than perhaps lower viewing figures for some Turkish soap operas on Egyptian television.

Egypt’s economy is showing signs of a slow recovery so its government may feel that it can afford to take a more assertive line against its international critics. Employment levels rose in September for the first time in two and a half years, albeit modestly, industrial production is also expanding, and the local stock market is attracting more investors.

Even so, if the idea of a boycott does pick up momentum – whether officially sanctioned or not – there is very little prospect that it will cause Turkey to change its approach. No one in Ankara appears very bothered by the counter-accusations from Cairo and, when it comes to trade, Turkey is in the stronger position.

Turkey was Egypt’s fifth most important export market in 2012, according to the most recent statistics available from the World Bank, buying goods worth $1.6 billion, equivalent to more than 5 percent of all Egyptian exports that year. It was also Egypt’s sixth most important source of imports, accounting for $3.5 billion or 5 percent of the total.

When it comes to investment in each other’s economies, it is a similar story. There is almost no Egyptian direct investment into Turkey – the stock of Egyptian foreign direct investment (FDI) in Turkey amounted to just $1 million in 2012, according to UNCTAD. In the other direction, around $25 million a year has been flowing from Turkey into Egypt in recent years and the total FDI stock stands at around $143 million. While this is not entirely insignificant, it still means that Egypt lies behind the likes of Belgium and Romania and even the Marshall Islands when it comes to Turkish investment overseas.

Egypt clearly needs trade with Turkey more than Turkey needs Egypt and it could do with attracting more investment too. So for the authorities in Cairo to even entertain the idea of a boycott is rather self-defeating.

In any case, while the Egyptian government’s thin skin is hardly unusual in the Middle East, nothing Erdoğan says is going to fundamentally alter Sisi’s position these days. Egyptian attitudes towards Turkey have been on the slide for a couple of years, so the impact of Erdoğan’s speeches is increasingly limited. As recently as 2012, 84 percent of Egyptians had a favorable opinion of Turkey, but by the following year it had slumped to just 38 percent, according to opinion polls carried out by KA Research and the Turkish Economic & Social Studies Foundation.

However, all this does raise the question of whether the Egyptian-Turkish spat could have any ramifications on what is happening in other parts of the Middle East. Sisi’s most ardent supporters are the Gulf states of Saudi Arabia and the UAE. They are already irritated by Turkey’s support for the Muslim Brotherhood and the criticism of Sisi is a further annoyance. That relationship matters because Turkey and the Gulf states could usefully co-operate when it comes to Syria, where they have a mutual interest in defeating both the Islamic State forces and the regime of Bashar al-Assad.

There doesn’t seem to be much prospect of Ankara or Cairo dialling down the criticism of each other anytime soon, but if they could find a way of tolerating each other both sides would probably benefit. On the other hand, if they continue on their current course it’s difficult to see anyone profiting.

Dominic Dudley is a freelance journalist and analyst who specialises in covering business and economic stories in the Middle East and Africa. He is a former Deputy Editor of the Middle East Economic Digest and his articles have appeared in The Economist, Bloomberg Businessweek and Foreign Policy, among many others.

Image: Photo: Recep Tayyip Erdogan, then prime minister of Turkey, addresses the general debate of the sixty-fourth session of the General Assembly in 2009 (UN)