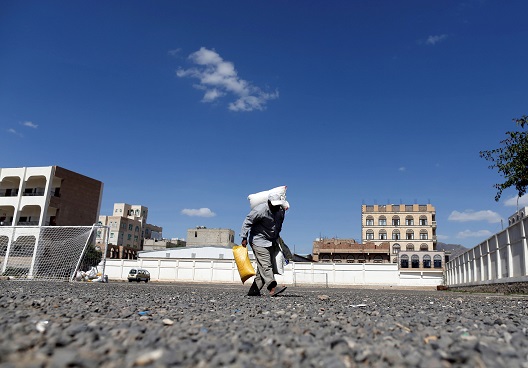 Photo: A man carries sacks of wheat flour, sugar and rice he received from a local charity during the holy month of Ramadan in Sanaa, Yemen May 29, 2017. REUTERS/Khaled Abdullah

In Yemen, the poorest country in the MENA region, more than two years of an ongoing conflict has resulted in a massive humanitarian catastrophe. Over seventeen million people are not able to adequately feed themselves and are frequently forced to skip meals. Seven million of these are severely food insecure, which means they do not know where their next meal will come from. The conflict has internally displaced around three million people. Many have chosen to travel to ancestral villages or to live with their families or relatives.

According to the Taskforce on Population Movement (TFPM) report, fifty-five percent of IDPs in Yemen live with host families, around twenty-two percent live in rented homes, and nineteen percent live in collective centers or spontaneous settlements. This data shows that over seventy percent of the IDPs do not live in camps or settlements. TFPM reported that IDPs did not identify the need to shelter as a major priority compared with sixty-six percent listing food as top priority and access to clean water and hygiene needs.

Yemen’s traditional support mechanism dictates that host communities—extended families, friends or any other social network—welcome IDPs by sharing space, income, and resources. Yet host communities themselves are often poor and over stretched. Host families take on a massive burden supporting IDPs, but do not receive enough humanitarian aid. Eighty-one percent of IDPs have been displaced for over a year suggesting a prolonged burden on hosting communities. According to the Shelter Cluster-Yemen fact sheet, families hosted by friends and relatives report that inter-family tension is increasing. Moreover, a great bulk of the humanitarian assistance is directed to IDPs instead of host families which further contributes to increased tensions. In one incident, a woman and her family residing in Taizz city, a hot frontline, hardly managed to flee to her family village to stay with relatives. They were first welcomed, but the longer they stayed the more tension increased. The families quarreled constantly over the distribution of water that the women brought from a distant well. Tensions increased to such an extent, that the family decided to return to their war-torn home in the city amid missiles and shelling. The displaced family preferring to die by a missile to what they described as a ‘hellish life’ back in the village.

Tensions escalated between the host community against the Muhamasheen IDPs camp in July 2016. The host community blocked assistance to the camp in Amran governorate, northwest of the capital Sana’a, for six consecutive months. The camp sits on land rented temporarily by a landlord and hosts Muhamasheen; IDPs displaced from Saada’a governorate months after the escalation of the conflict in March 2015. Muhamasheen are a marginalized group in the Yemeni community based on the color of their skin and cultural practices. Most are denied the right to basic services and integration into the community.

One international NGO attempted to negotiate with the landlord to allow the Muhamasheen IDPs to continue to stay in his land temporarily. However, humanitarian organizations kept providing the camp with aid without taking into consideration two main issues. First, this is a temporary camp and the influx of humanitarian assistance establishes permanent IDPs in this agricultural land instead of allowing the camp to act as a holding center before moving on to another more permanent and sustainable location. This lack of planning has led to a confrontation with the landlord. Second, the surrounding area is populated with very poor households and some of whom are already hosting IDP families and are prevented from receiving any assistance.

A few months later, a conflict erupted between the landlord along with tribal men against the IDPs. The host community felt pressure from these organizations to support the culturally and ethnically Muhamasheen IDPs in additional to their own displaced family members without the necessary aid to support both displaced communities.

Yet some organizations employed good practices while delivering assistance. One organization opted to engage the community in designing one of their awareness-raising projects around gender issues. The community explicitly stated that they wouldn’t be interested in the project if it was all about raising awareness at a time when people can’t find what to eat. Taking people’s input into consideration, the organization integrated a component of livelihood resources and provisions as part of the project to get the buy-in of family heads—mostly men—and the interest of the women themselves. They went further to engage the women about the type of the livelihood asset they preferred. Because the project was implemented in a rural area known for its quality of meat, women cited sheep as their preference. The project was a success which not only enabled women with knowledge and livelihood resources, but also provided families the best kind of humanitarian assistance they’ve been asking for. With little aid coming into Yemen and a relentless war, humanitarians are forced to “triage” their response and affected people have to decide where to place the little they have. Difficult decisions are being made every day by affected people and by humanitarians. Humanitarian organizations have a responsibility towards communities to address social cohesion and apply a conflict sensitive approach in the humanitarian assistance to avoid disrupting the social fabric, already at the brink. Hence, it is essential to understand communities to ensure delivering no-harm humanitarian assistance.

Ghaidaa Motahar is a gender and social cohesion specialist, with a master’s degree in Political Science from Warsaw University. She tweets at @GhaidaaMotahar.
Mohammed Al-Sabahi is both a practitioner and lecturer of development and humanitarianism. He has a master’s degree in international development from the University of Bristol in the UK. He tweets @SabahiMohammed.