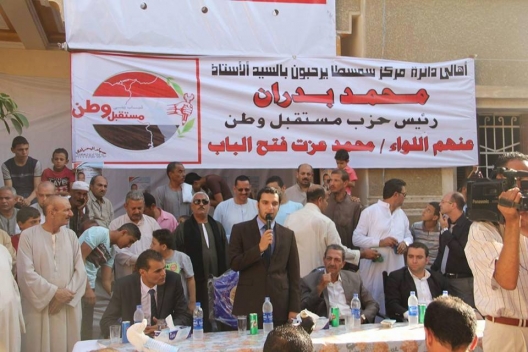 Sitting in the back of a black Mercedes making its way through Alexandria, Mohamed Badran is tired and losing his voice. Fifteen minutes earlier, the 24-year-old leader of the Mostaqbal Watan (Nation’s Future) Party spoke at an electoral rally for a party candidate. He is now on his way to a second rally in a convoy of cars driven by party members and staff. He flew from the southern province of Aswan to Cairo in the morning, and then drove three hours to the coastal city of Alexandria.

His ambitions keep him going. He asks the young man in the front seat for status updates about the candidates’ mobilization capabilities and their chances.

“We seek to rule Egypt,” Mohamed Badran tells me in the car. “Is this a good quote?” he smiles.

One month shy of celebrating its first anniversary, the Nation’s Future Party, is fielding 185 candidates as independents in Egypt’s parliamentary elections, placing it among the top three. Al-Wafd, Egypt’s oldest party is fielding roughly 270 and the Free Egyptians, the arguably best funded party, is fielding 227.

Mostqabal Watan also has almost as many candidates as each of the two parties in Fi Hob Misr (For the Love of Egypt), the electoral list headed by former army general Sameh Seif al-Yazal, and expected to dominate the race. Seif al-Yazal, who said he has made enemies for his finicky selection process of candidates for the 120 seats in the list, singled out Mostaqbal Watan and Badran with praise in an interview on Sada El-Baald.. “Mostaqbal Watan is the only youth party in 104 parties. It’s the one I’m optimistic about,” he said.

Badran’s foray into public life started with his election as the president of Egypt’s Student Unions in April 2013. He was part of a coalition that defeated the Muslim Brotherhood candidates. After the ouster of then-president Mohamed Morsi, Badran represented students in the 50-member committee tasked with rewriting the constitution.

Before the party was officially founded, the young members of the Mostaqbal Watan came together as a campaign formed to promote the post-Morsi roadmap. They toured the country in January 2014 mobilizing votes in support of the constitution, and four months later, promoting Sisi’s presidential bid. At a time when scores of activists were arrested under the November 2013 protest law and opposition parties’ members were arrested for campaigning against the constitution, Mostaqbal Watan members were welcomed with open arms by security and state officials.

Within a year, the campaign became a party. Capitalizing on the youth base of student unions across Egypt made this possible, Badran says. The party also claims to have established offices in all provinces since its November 2014 inauguration. Finances, the main hurdle holding back most parties, is not an issue for Mostaqbal Watan. Badran lists a number of businessmen as party financiers, including Mubarak-era real estate mogul Farag Amer and Ahmed Abu Hashima.

Since March 2015, when parliamentary elections were postponed, the numerous entities that emerged to support Sisi and boasted high profile members of former ministers and ambassadors faded. Parties with the potential to act as opposition to the regime, including the National Movement Party led by 2012 presidential candidate Ahmed Shafiq, started disintegrating, losing potential candidates to Mostaqbal Watan.

Badran’s appearance next to President Abdel Fattah al-Sisi during the opening of the Suez Canal expansion last August boosted the party’s position and further fueled speculation that Badran was being groomed for power.

The presidency has repeatedly denied backing any political entities. Yet, Sisi’s critics and some of his supporters noted the need for a political backbone: a voice for Sisi’s policies in parliament that would solidify and translate his popular support into action.

“The president has no alternative but to have a political backbone. Not for him to succeed, to be elected for a second term, or to support his decrees, but for fixing the country,” Badran says.

Sisi moved to the presidency with some of the staff that assisted him as military intelligence chief and defense minister. He has ruled Egypt with almost exclusive control of legislative powers, and his suggestions that political parties unite as one coalition are indicative of a political vision devoid of the diversity that should define a healthy political scene.

Party members and candidates say defending the interest of the nation and the state would be their defining strategy in the parliament. Badran says they don’t want to be the ‘president’s party,’ but so far, the 24-year-old agrees with all of Sisi’s decisions, except for his recent pardoning of 100 jailed activists.

In Alexandria and other provinces, the party depends on enlisting candidates with high chances of winning, a tactic employed by the other top parties. When we arrive at our destination in Mina al-Basal, a low-income neighborhood west of Alexandria, we find hundreds in an electoral rally for candidate Ashraf Rashad Othman. The candidate, like many across Egypt, uses his father’s name and his last name to emphasize the lineage of the rich, charitable family. Rashad Othman is a leading businessman and former member of parliament.

The road leading to the rally is lined with posters of Rashad, and speakers blast a song written in support of his candidacy. Not everyone there knows of Mostaqbal Watan. Nagat Mohamed, an elderly housewife, says she would vote for Othman no matter what. She used to vote for his father.

Near the podium, a banner welcomes Badran. His image, pictured next to Sisi at the Suez Canal expansion ceremony, takes up half of the banner, a silent explanation of why a 24-year-old was sitting on a panel with politicians more than double his age.

Most of the candidates fielded by the party are older, rather than from among the party’s young members and founders. “The party’s goal is to create an environment for youth to engage in politics,” says Ahmed Ouf, an Alexandria-native and member of the high committee of the party. The aim of this parliamentary round is to prepare youth before handing power over to them, explains Ahmed Naguib, one of the young founders of the party who takes pride in the legwork he’s put into campaigning and networking.

Despite rumors of state backing, Sisi has maintained a public distance from all candidates, including Mostaqbal Watan and his avid supporters on the Fi Hob Misr list. Mostaqbal Watan could, however, become for Sisi what the National Democratic Party was to Hosni Mubarak: a ruling party that benefits from ties to the state and enacts the president’s vision in parliament. The youth base embodied in Badran provides fresh faces, unlike the older generational vying for the position and whose background could prove to be a liability to Sisi. The party’s lack of ideology renders it a clean slate to promote whatever policies the state wants. Yet, for Sisi, a direct affiliation with a political party could prove more damaging than rewarding. After all, antics by MPs in the short lived 2012 parliament negatively affected their respective parties and coalitions.

Mostaqbal Watan is a potential candidate for the job, if ever there is a job to fill. But first, the party will have to prove its worth in the elections and its ability to survive the lack of defining ideology and vision, a problem that proved damaging to other parties.

For the time being, Badran’s dreams extend beyond the parliament. He sees his future as Egypt’s prime minister.

Sarah El Sirgany is a nonresident fellow at the Rafik Hariri Center for the Middle East.