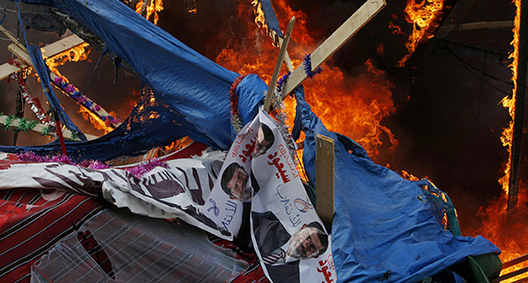 When CNN broke the news the evening of October 8 that the United States would formally withdraw all foreign military aid to Egypt, everyone was set atwitter. Literally. Avid Egypt observers furiously took to social media to mark what would have been the most significant change to US-Egypt relations since the late 1970s. The only problem was the story’s inaccuracy. Within an hour of the breaking news, the White House press office sent an email to journalists notifying them that the statement suggesting the suspension of all aid was false. National Security Council spokesperson Caitlin Hayden reiterated US President Barack Obama’s stance delivered during the United Nations General Assembly, that the United States would continue the aid relationship with Egypt. A subsequent statement by White House spokesperson Jay Carney indicated that an official statement would be issued after consultations with Egypt and members of Congress. State Department spokesperson Jen Psaki’s latest statement confirmed that only major large-scale military systems and cash assistance would be affected. This hodgepodge of mixed messages reflects the confusion over influencing Egyptian policy toward a democratic transition and raises questions as to what an aid suspension might accomplish now.

The fact remains that many interested parties would like to see foreign military assistance continue, but the steps taken by the Egyptian military in the removal of the now ousted Egyptian president Mohamed Morsi on July 3 has made it difficult to justify to critics the utility aid as leverage and its effect on the United States’ international standing. Caught between a US defense industry that stands to lose out on hundreds of millions in contracts with Egypt, members of Congress who see the assistance as an integral cornerstone of the peace treaty with Israel, and an Egyptian government that views this assistance as an entitlement for toeing Washington’s foreign policy line for decades, Obama has found it difficult indeed to alter the policy, even in the face of a military coup. Although Hayden’s statement did not rule out cutting part of the assistance, and Carney may have implied at least a partial aid suspension when he said, “we’re not going to continue with business as usual,” it appears that military assistance remains intact.

The truth is that not much has changed at all, nor is it likely to change by any significant degree in the future. Psaki discussed the issue of foreign military financing in her October 1 press briefing. In the context of a government shutdown, she described how the government released the remaining $584 million of unobligated military assistance under the 2013 fiscal year to the New York bank account against which the Egyptian government can borrow to procure arms. Although the United States still has the power to approve or reject how that money can be spent—and the truth is that the delivey of big ticket items such as helicopters and F-16 jets have been interrupted—it appears that other forms of assistance will continue. Counterterrorism still remains a high priority for both the United States and (especially now) Egypt, and purchases have been approved by the US Department of Defense over the last two months. The cash assistance restriction, suggesting a cut to economic support funds, only serves to withdraw a miniscule portion of budget support from a struggling government. So, does this limited suspension do much to curb the resurgent police state or crackdown on pro-Morsi supporters? In a word, no.

As the military-backed interim government in Egypt fights what it calls its own “war on terror,” maintaining the narrative that the coup and repressive measures against the Muslim Brotherhood are a necessary evil, concerns over next year’s procurement budget can wait—particularly as the United States struggles with its own stalled government and other domestic woes. With its funds already allocated, Egypt can bide its time, ensuring progress on the roadmap to a constitutional referendum, parliamentary and presidential elections, and a veneer of democratic development. The Obama administration will maintain its current policy—that enacted since the July 3 coup—and as debate over the 2014 fiscal year rolls around, the Egyptian government will make its argument that it is in fact making “credible progress toward an inclusive, democratically elected civilian government through free and fair elections.” The non-news of this partial aid cut essentially means an implicit continuation of foreign military assistance and the perpetuation of the unbreakable aid paradigm. If the Obama administration truly wants leverage over events in Egypt, it will have to do better than this.