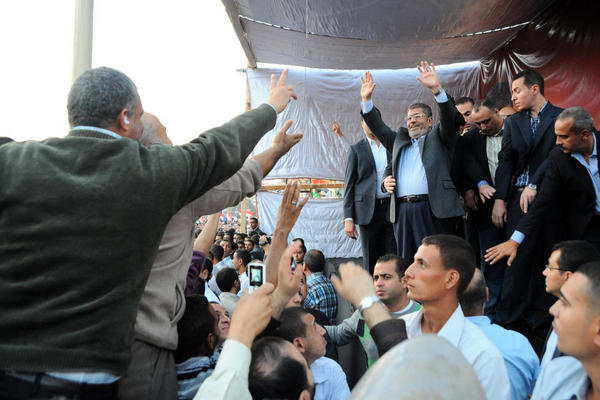 The 22nd of November will go down in history as the day President Mohammed Morsi issued, not a constitutional decree, but rather an authoritarian decree. Referring to his declaration as constitutional is an infringement on the nation’s very constitution as well as on its laws. At the same time, describing the decree as authoritarian may anger those in support of it, and so it is necessary to discuss its six articles in detail, demonstrating the accuracy of this characterization.Download the PDF

Morsi’s constitutional declaration reveals the significant shortcomings within the political administration of Egypt’s state, inadequacies seen not only during the transitional phase under the Supreme Council of the Armed Forces, but also under the newly elected president. These shortcomings are evident within this regime and its inability to present viable political solutions for the immediate crises facing Egypt.

The first and third articles can be seen as attempts to address the demand for justice in the wake of the Egyptian uprising. Article 1 calls for the reopening of investigations into the killing of protesters during the January 2011 uprising. All those accused of murder or attempted murder are to be retried, as per a newly issued law aimed at "protecting the revolution". Here, we run into the first predicament presented by this decree. Reopening the investigations and prosecutions in proceedings where a judge has already given a final verdict is a flagrant violation of the law. Had a verdict not been issued, the door would still be open for many of these cases to be retried if new evidence were presented.

The reality of the situation is that currently, all trials in which authorities were cleared of the charges of killing protesters are now in the hands of the Court of Cassation. If new evidence were to appear, it could then be presented to this court. Only in this manner can a true change in the verdicts be brought about. The innocent verdicts are the result of a lack of evidence, and so if anything, this demonstrates the strength and impartiality of the Egyptian judiciary, putting forth its rulings without being swayed by popular opinion, which has proven to be a constant source of pressure on the courts.

The real blame lies not with the courts, but with those responsible for collecting evidence and tracking down suspects – in other words the Egyptian security apparatus. With the police themselves standing accused in these trials, could we truly expect them to present self-incriminating evidence? Morsi should have made a political decision, ordering the security apparatus to investigate the facts and evidence needed in order to rule in the many cases involving protester killings, as well as corruption cases. Had Morsi taken positive steps to reform the Ministry of Interior – one of the unfulfilled demands of the revolution – there would have been no need for constitutional declarations and exceptional laws, the kind of which were not adopted during Egypt’s transitional phase, an achievement of the revolution in of itself. The judiciary would have then been able to carry out its mandate in accordance with the law.

Article 3, in which Morsi appoints a new Public Prosecutor  was simply an indirect way of sacking Abdel Meguid Mahmoud, having failed to do so with his first attempt. The article is a breach of the constitution, the law and judicial norms. In the March 2011 Constitutional Declaration, Article 47 stated that judges cannot be sacked, a provision which guarantees full judicial independence – and the Attorney General’s office falls under the umbrella of the judiciary.  Morsi’s decree is in direct contradiction with the March 2011 Constitutional Declaration – and that alone is enough to invalidate the November 2012 Decree.

Regarding the very appointment of a new Attorney General, Morsi’s decree does away with the standard procedure under which this selection takes place. A new Attorney General can only be chosen after the Supreme  Judiciary Council nominates its candidates. Instead, Morsi took the matter into his own hands, a move which represents the collapse of the rule of law.

The second article, a disaster in of itself, grants the president complete immunity – stating that any laws or decrees issued by Morsi cannot be appealed by any means. Through Article 2, we are presented with a president who is creating an ‘infrastructure of tyranny’, devoid of any supervision by either an elected parliament or a judiciary able to enforce the rule of law. This is no different to the medieval notion of the divine right of kings, asserting that the monarch cannot be subjected to any form of authority whatsoever.

Article 2 deprives the judiciary of its essential role – and that is to apply the rule of law on all citizens equally. Regimes the world over are built on the idea that leaders and the executive branch are subject to judicial review in order to ensure that power is not abused, and to create a balance between state authorities. The judiciary is further deprived of its authority with Article 5 of the decree, which states that no judicial authority can dissolve either the Shura Council or the Constituent Assembly.

Article 4 of the decree addresses the short period of time remaining for the Constituent Assembly to complete its work, extending the deadline by another two months. Despite what supporters of the constitutional decree might say, this article is useless. The crisis related to the Constituent Assembly has nothing to do with a lack of time, but rather is due to a lack of consensus within the Assembly. This lack of consensus has been demonstrated time and time again by a wave of withdrawals from the assembly, with over 25 members representing significant segments of Egyptian society walking out. Most of these withdrawals came before the constitutional decree was announced, while the walkouts continue to occur in its wake. The constituent assembly does not require additional time, but rather requires political intervention.

As far as the Constituent Assembly is concerned, the solution did lie in political intervention, but not through the method chosen by Morsi.  Formed 5 months ago, the Assembly has come under continuous criticism, has witnessed countless walkouts, and has had several lawsuits filed against it, calling for its dissolution. In this charged atmosphere, it is practically impossible for the Constituent Assembly to produce a viable document, and with the political polarization within the assembly, the only real solution is to form a more balanced assembly.

This right was granted to the president through the August 12, 2012 constitutional declaration, and had he used this power, it would have represented a major breakthrough in Egypt’s severe political crisis, one which would have been viewed positively by most political forces. Morsi need only replace 20 to 30 of the Assembly members to allow for a more balanced body, one which represents the various political trends in Egypt. The drafting would also simply be picked up from where the previous Constituent Assembly left off, rather than starting from scratch.

The final article grants the president the authority to take any measures he sees fit, provided they preserve the revolution, national unity and national security. There is no need for this article as maintaining the security and integrity of the country are part of the president’s mandate to begin with. However, this duty should be limited by the constitution and the law, and used only in a framework in which rights and freedoms of citizens are respected. Of real concern is the ambiguous wording of this article. It makes no mention of the kinds of dangers threatening the nation that would require such a sweeping statement, nor does it make reference to what kinds of measures the president would use. Simply put, article 6 opens the door to the destruction of citizens’ rights and freedoms.

Egypt has gained, in the past few days since the constitutional decree was announced, nothing more than turmoil and a deepening of its political polarization. The only way out is the immediate annulment of the decree, a matter which would require courage from the president, as well as real and serious dialogue with all of the political forces in Egypt, in an attempt to truly bring them together.