The Syria policy review that the Joe Biden administration initiated upon taking office a year ago has concluded. Early indications suggest that Washington’s official Syria policy will be markedly timid. It appears that the administration isn’t only deprioritizing Syria due to a cramped foreign policy agenda, but more clearly pronouncing a lack of strategic interest and an official approach of disengagement.

Over the past few weeks, several Biden administration officials alluded to three specific objectives pertaining to Syria policy. These include: maintaining US military presence explicitly as a part of the ongoing campaign to counter and prevent the resurgence of the Islamic State of Iraq and al-Sham (ISIS); sustaining local ceasefires and contributing to violence reduction; and improving humanitarian conditions. While they may be perceived as pragmatic or realistic, these objectives don’t constitute a policy that aims at impacting the trajectory of the Syrian conflict. Rather, these represent a minimalist threat-management policy, suggesting a US reactionary approach to future events in Syria.

Constrained by numerous domestic, international, and conflict-specific limitations, President Biden has approached Syria without a clear direction and purpose since taking office in January 2021. His presidency also came when the Syrian conflict hit the decade mark and encounters a legacy of US policy on Syria that has been deeply incoherent and definingly inconsistent. As such, the Biden administration has likely never felt that it could overhaul a cost-benefit analysis that would shift on-the-ground realities, especially where rivals—i.e. Russia and Iran—view their interests in the conflict far more vitally than Washington does. As a result, the Biden administration operated with the same narrow policy as its predecessor, Donald Trump.

Against this backdrop, Syrians live a dim situational reality and face regional dynamics that growingly favor and legitimize authoritarianism. Despite a devastated economy and increasingly unfavorable living conditions in regime-held territories, the Bashar al-Assad regime’s control over large parts of Syria appears ever more certain compared to other parts of the country. Regional efforts to normalize the regime have only empowered the authoritarian leadership and exposed Washington’s failure to coordinate regional policies among allies and its lack of commitment to its sanctions policy.

Today, and after much supposed deliberations at the White House to define what US interests in Syria are, the new policy entails no change in approach and is essentially a continuation of the interim, Trump-lite policy. Moving forward, the US will likely maintain the same course of gradual disengagement from Syria.

Since 2013-2014, the US military presence in Syria has largely been tactical. While effective in countering specific threats, it lacks a link to a strategic policy. Following the territorial defeat of ISIS in 2019, the roughly nine hundred US troops stationed in the northeast and at the al-Tanf garrison in the southeast have had a meaningful impact on stabilization and capacity building. However, the troop presence is also increasingly facing a policy predicament. With less kinetic operations taking place and amid a counter-terrorism success-turned-frozen conflict, US military presence requires a committable and achievable objective that relates to the political reality on the ground. Inarguably, ISIS hasn’t been fully defeated, yet it no longer remains the existential threat it once was. Rather, the political and economic insecurity in the northeast is of a greater consequence. Additionally, the relationship between Turkey and the Syrian Kurdish authorities of the Autonomous Administration of North and East Syria remains tense, impacting the fate of millions of Syrians in the region.

While the hope may be that passive US presence could translate into political gains and broader regional stability, explicitly narrowing the objective of military presence to the anti-ISIS campaign implies bleak prospects. Lacking pronounced and defined tools of engagement aimed at the sustenance of US presence, Russia and Iran will likely continue to challenge it, particularly at a time when partners—such as the Kurds—question Washington’s commitment. Moscow further strives to situate itself as a dedicated mediator and guarantor of the status quo, warming its relations with Syria’s Kurdish leadership. Along with Iran, Russia may continue to inflict costs on US troops to push the United States towards departure as they have previously done. In 2020, Russian forces twice engaged in an altercation with US military patrols in northeastern Syria, injuring four US troops. Throughout 2021, Iranian-linked militias conducted three grey zone attacks against strategic American posts in Syria, involving rockets and drones—the latest of which took place in December 2021.

Should the US maintain its lukewarm commitment in northeast Syria and limit its presence to narrow national security calculations rather than broader aims of stabilization and regional de-escalation, there is a risk that increased hostility would translate into possible US withdrawal. This would indeed be the death knell for Washington’s ability to meaningfully impact the dynamics of the Syrian conflict and any future political settlement.

The second Syria objective is to sustain current local ceasefires. While any effort towards reducing violence and limiting hostilities is welcomed, it’s unclear how Washington would achieve that. While the US military presence has played a stabilizing role in the northeast of the country, the truth is that the remainder of official and unofficial local ceasefires across Syria are the result of detailed, interest-driven security arrangements involving Russia, Iran, and Turkey. The US didn’t attempt to engage in such agreements and was left excluded from almost all of them. Washington failed at maintaining the ceasefire in southern Syria this past summer, and there is no indication that it’s capable of impacting any of the rest.

The Biden administration acutely lacks the willingness to employ further military tools in Syria to achieve objectives and, as such, has been amplifying its rhetoric on utilizing diplomacy. If Washington’s rivals continue to challenge its presence, it is unlikely that the US would be able to contribute to de-escalation without proactive engagement. Lacking leverage capable of challenging hostile actors, the Assad regime will likely continue business as usual, aware that neither of its key allies—Russia and Iran—have any real challenger.

The US focus on humanitarian work as one of the three objectives is a clear shift from the political and human rights nature of the conflict. While improving humanitarian conditions is undoubtedly essential, given the rampant poverty and near-famine conditions, it’s really on the periphery of the Syria file, and its impact on US policy and the conflict’s development is minimal. The dire humanitarian situation is a product rather than a cause of the conflict and addressing it exclusively won’t impact its trajectory. The focus on humanitarian efforts as a policy objective begs the question of the US’s desired role in shaping an endgame in Syria.

While the Biden administration maintains a rhetorical commitment to United Nations Security Council Resolution (UNSCR) 2254—a roadmap for political transition—its stated priorities and actions do nothing to lay the groundwork for that resolution. By injecting humanitarian support to improve living conditions fractionally, Washington deprioritizes political transition. And in doing so, UNSCR 2254 becomes increasingly irrelevant and inapplicable as the facts on the ground preclude any possibility for a meaningful settlement.

Recent regional efforts to normalize relations with the Syrian regime, as well as the decision by Interpol in October 2021 to allow Syria to rejoin its network without US objection, further indicate a recognized shift from the political nature of the conflict and a growing acceptance of a fait accompli.

Taken together, the objectives of the Biden administration’s Syria policy review paint a troubling picture of further US disengagement. Stated but unsupported commitments to a political solution in line with UNSCR 2254 are insufficient when contrasted with the active role that Russia, Iran, and Turkey are playing in impacting the facts on the ground. Ultimately, these changing realities will determine the course of the conflict, rather than any Geneva-based negotiations, as seen by the multiple variations of failed political talks in the past.

The problem here is that these supposed three objectives are, in fact, nothing but desired aims. Sound policy objectives aren’t only informed by an aim to advance interests but also sufficient means of achievability. Although narrow and limited, these stated goals will unlikely translate into actual policy objectives, given that they lack decisive commitment and defined tools for engagement. Even assuming they translate to actual policy objectives, they are unlikely to result in the US’s rhetorical desire for a political solution in line with UNSCR 2254 or even a promising role for the US in ultimately shaping the endgame.

Abdulrahman al-Masri is a nonresident fellow at the Atlantic Council’s Middle East Programs. Follow him on Twitter: @AbdulrhmanMasri.

Reem Salahi (JD) is a nonresident fellow at the Atlantic Council’s Middle East Programs and a senior advisor to the International Commission on Missing Person’s (ICMP) Syria/MENA program. 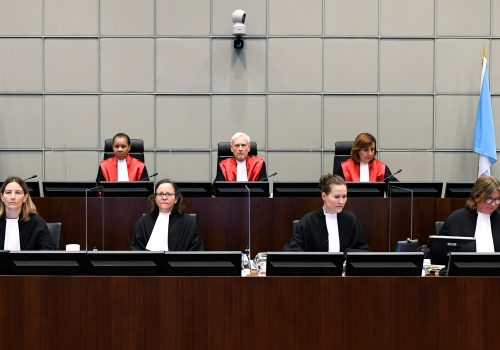 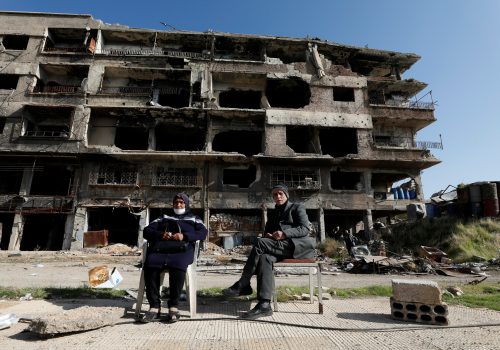 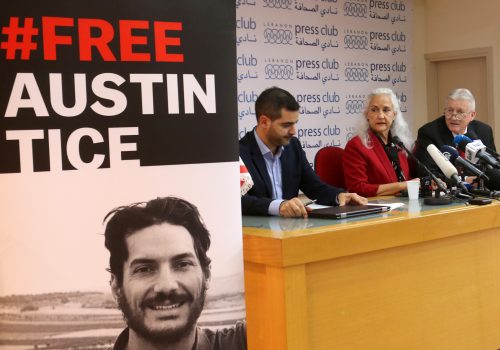 Will US troops actually leave Syria in exchange for hostages?

While the talks between Washington and the Bashar al-Assad regime may be in its early stages, Donald Trump may want to secure some pre-election victories by securing the release of hostages and the return of soldiers.