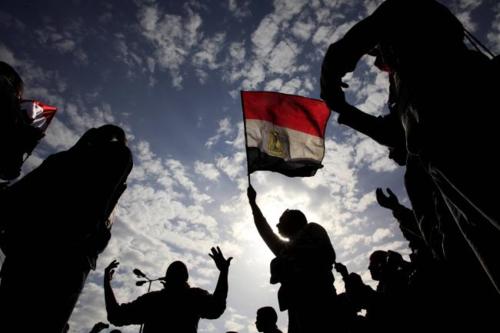 Although Egypt’s most genuinely competitive elections since the 1952 military coup have been dominating the headlines lately, the true political battleground still lies ahead. Liberal and Islamist political forces are headed for a collision with the Supreme Council of the Armed Force (SCAF) over competing visions for Egypt’s new constitution and divergent views on the optimal timeline for drafting the document.  On January 1, Judge Mohamed Attiya confirmed earlier statements by the SCAF indicating that a new constitution must be drafted before the presidential election.  Attiya, the Minister of Parliamentary Affairs, also revealed that the registration period for presidential candidates would begin in April following a popular referendum on the constitution, meaning that Egypt’s new charter will need to be written in less than 8 weeks.

Not only is this timeline impossibly short; it might also be illegal, according to Judge Tarek al-Beshry, who was a member of the committee that drafted the interim constitution ratified by popular referendum on March 19, 2011. According to al-Beshry, the fast-track constitution scenario outlined by Attiya violates provisions of the nine constitutional amendments approved by voters last March, which were intended to lay the framework for a presidential election before the new constitution. According to reformist Judge Ahmed Mekki, the original package of amendments implied that the next elected president and a parliamentary majority must jointly agree to commission a new constitution by a 100-member committee chosen by elected MPs.

Although the amendments approved on March 19 provided a legal basis for electing the president first, the final Constitutional Declaration issued by the SCAF on March 30 contained new language altering the transitional sequence approved by voters. By replacing the word “President” with “Supreme Council of the Armed Forces” in Article 60 of the March 30 declaration, the SCAF seems to have deliberately muddled the roadmap and introduced a loophole allowing the military to reshuffle the transitional timeline at will, as well as a free hand to dictate the constitutional process without interference by a civilian president.

As the dust settles following the frenzied 3-month campaign carnival of the People’s Assembly elections, the Egyptian public and political forces are now catching on to the looming constitutional crisis that has been brewing on the back burner since last year’s referendum. As the SCAF tries to fast-track the constitutional process at a dizzying pace, it’s clear that this road paved with pitfalls leads straight back to the March 30 Constitutional Declaration. By inserting subtle but deliberate modifications into the package of nine amendments ratified by voters on March 19, the SCAF stealthily rigged the interim constitution with loopholes allowing for military oversight over the blueprint for Egypt’s future legal framework.

Not only do rival political forces disagree fundamentally on the appropriate role for the military and religion in the political system – crucial but divisive issues that must be addressed in the new constitution – but they also have different preferences for the sequence of the drafting process itself.  The on-again off-again alliance between the Muslim Brotherhood and the Supreme Council of the Armed Forces (SCAF) is warming up again over their agreement on the controversial issue of sequencing, with both parties insisting that the new constitution be written before the presidential election, albeit for very different reasons:

Although liberal and leftist groups appear to be aligning in favor of an early presidential election before the constitution, Egypt’s two most powerful political forces – the SCAF and the Muslim Brotherhood – are determined to reverse the sequence. After a major fallout between the SCAF and Muslim Brotherhood in November over the former’s attempts to interfere with the constitutional process by issuing supra-constitutional principles, these two strange bedfellows are rekindling an uneasy alliance over their common interest in drafting the new constitution as soon as possible.

Given the uncertain shelf-life of the new People’s Assembly, which could be dissolved within the next year if a new constitution requires changes to the parliamentary system, it’s no surprise that the FJP is in a hurry to capitalize on its majority before the rules of the political playing field are reconfigured again. On December 27, the Muslim Brotherhood released an official statement rejecting proposals for an accelerated transfer of power to civilians and calling for “The constitution first, president second.”

The “constitution first” position has also been taken up by the SCAF, in a reversal of statements last March suggesting that the Constitutional Declaration implied the opposite sequence: the election of the People’s Assembly followed by the selection of a 100-member constitutional committee; the presidential election; and finally, the drafting of a new constitution. But since the ratification of the Constitutional Declaration, the SCAF has become increasingly aggressive in its efforts to influence the new constitution, apparently fearing that the impending transfer of power to a civilian president would curb its ability to build a legal firewall around the military’s political and economic privileges. As Nathan Brown, an expert on Egypt’s constitutional system, explained, “Members of the SCAF seem to have realized that once presidential elections were held, the SCAF would lose its ability to make sure that their favorite provisions were inserted into the constitution.”

The SCAF’s ill-considered solution to this dilemma was an initiative to postpone the presidential election for up to two years, a timeline that was deeply disturbing to protesters demanding an immediate end to military rule. Backed into a corner by a resurgence of mass demonstrations, the SCAF backed down and agreed to hold the presidential election by June 2012, not seeming at all concerned about the feasibility of whipping up a new constitution in a matter of months. The only way to write a constitution that quickly would be to keep Egypt’s 1971 constitution virtually intact, an outcome that would be an insult to a revolution that called for a new social contract, not a remix of the old one.  Preserving problematic elements of the old constitution — including a 50 percent electoral quota for farmers and workers that has been credited with producing distorted and unrepresentative parliaments — will not be conducive to a successful democratic transition.

Rushing the constitutional process will inevitably exclude new political forces and visions that are still crystallizing in the fray of Egypt’s first post-Mubarak elections, not to mention the activists and NGOs that are busy fending off the SCAF’s harassment. Raafat Fouda, a law professor at Cairo University, estimates that it could take a year to reach consensus on a single controversial clause, Article 2 of the 1971 Constitution, which identifies Islam as the state religion and Islamic law as the principle source of legislation. Not only would a hastily constructed constitution be unrepresentative; it could easily contain structural flaws requiring a future overhaul.

Egypt could learn some lessons from Russia’s train wreck of a transition, which has seen five different constitutions in the past century.  “Good constitutions take a lot of time,” said Andrew Reynolds, a professor at the University of North Carolina, Chapel Hill, who has been consulted on constitution design for countries including Iraq, Afghanistan, Yemen, and South Sudan.  Rather than try to hotline a quick-fix constitution that won’t last for long, Egypt should take the time to get its constitution right the first time.