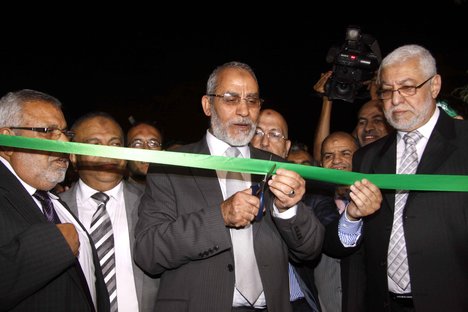 After winning an estimated 37.5 percent of the vote for list-based candidates in the third and final round of People’s Assembly elections, the Muslim Brotherhood’s Freedom and Justice Party is cruising toward an outright parliamentary majority, while Islamist parties collectively expect to hold around 70 percent of the seats. The FJP’s tireless voter outreach – some of it in violation of a 48-hour ban on campaigning before election day – has paid off with a clear political mandate.  Now the question is, what will the Brotherhood do with a green light to govern?

In an official statement published on the Brotherhood’s English-language website Ikhwanweb, FJP chairman Mohamed Morsy offers a laundry list of clues. The statement, outlining a “vision for Egypt’s future,” includes the following highlights:

For the most part, this agenda sounds entirely reasonable and even expresses some of the values – economic opportunity and justice – that have historically dominated American political discourse. In fact, Morsy’s latest statement is a little reminiscent of the “war on poverty” launched by US President Lyndon B. Johnson in 1965, which envisioned sweeping social reforms to fight unemployment and build a Great Society guaranteeing “abundance and liberty for all.”  That sounds a lot like the Muslim Brotherhood’s claim that “human dignity and freedom depend on the citizen earning a decent living with freedom from exploitation and poverty.”

While some readers might be easily charmed by the Brotherhood’s liberal-seeming political agenda, it’s worth asking, does Morsy’s “vision for a new Egypt” look to good to be true?  The fact that the document appears to have been circulated only on the Brotherhood’s English-language website – not on its companion Arabic sites – suggests that the statement may have been tailored to reassure Western audiences. Next up on EgyptSource, Michele Dunne points out what’s missing from the Brotherhood’s overture to the West.