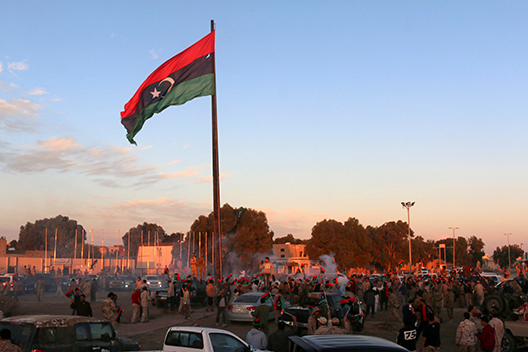 As the situation on the ground in Libya continues to deteriorate, many fear a complete descent into chaos. The successful operation against the Islamic State (ISIS or ISIL) in Sirte—formally conducted under the authority of the UN-sponsored and Tripoli-based Government of National Agreement (GNA)—but largely dominated by the Misrata militias, put the latter in close geographical proximity with the forces of their rival General Khalifa Haftar. Clashes between Haftar’s Libyan National Army (LNA) and the Misrata militias are already occurring in southern central Libya, and the worst case scenario of all-out war between these forces, which is becoming more and more probable, should be prevented at any cost. The GNA’s Presidential Council (PC), the executive power under the Libyan Political Agreement signed in Skhirat in December 2015, is facing collapse due to its many failures to restore order and stability to the country. The PC is also weakened by the many rivalries among its members, which led to the recent resignation of member Musa al-Koni and possibly at least two more. Meanwhile, clashes between Libya’s various militias, tribal groups, and criminal gangs are an everyday occurrence. The financial crisis, which is hindering the initiation of an economic recovery plan, the lack of fuel, the continuous interruption of electricity, and the increase in prices of most goods are also major components that, added to the rampant insecurity, make day-to-day survival an increasingly difficult task for most of the population.

Western actors who have pledged their support for the UN-led Libyan transition under the PC/GNA face a decisive choice. On the one hand, they can admit the failure of their support and withdraw from the theater. This could force Libyan actors, especially those with strong local ties, to recognize that the future of the country is in their hands alone and therefore they must lead negotiations among the various forces and reach an agreement to solve the crisis. This could be centered around a new ‘economic pact’ that would set a more equitable redistribution of resources among the various municipalities or around a more political national consensus agreement. The main regional neighbors of Egypt, Algeria, and Tunisia could be involved in this search for an accord, as they have the largest stake in the solution of the Libyan crisis due to their fears of the conflict spilling over.

While the choice of Western withdrawal from Libya may have some chances of success, there are many reasons why it would more likely fail given the rivalries between individual leaders, the lack of honest communications between them, and the general mistrust between the various tribal groups. Therefore, the international community needs an alternative path to play a helpful role in sustaining Libya’s recovery.

The weakness of the UN leadership played a major role in the failure of UN-led negotiations to produce a sustainable Libyan agreement based on a wide national consensus.  The lack of a coherent plan for tackling the economic and security issues in the country contributed to this failure. However, more blame can be attributed to the ambiguous role of the former UN Secretary General’s Special Representative to Libya, Bernardino Leon, whose relations with the UAE, one of the principal supporters of Haftar, undoubtedly stained the image of the organization and weakened the leverage of Leon’s successor, Martin Kobler. The different interests of regional actors, such as Egypt with its staunch support for Haftar, as well as the ambiguous role of other European actors, such as France, that proclaimed support for the negotiation process while simultaneously supporting the eastern strongman, further weakened the negotiation process and contributed to the demise of the PC/GNA.

While this situation seems increasingly more irresolvable, it is not hopeless. The situation could be improved by a stronger and more influential US role. The “leading from behind” strategy that characterized the Obama administration’s foreign policy must change with the new executive. Former Secretary of State Madeleine Albright and former National Security Advisor Steven Hadley in their wide spanned and thoughtful Middle East Strategy Task Force report (MEST) see this issue as solvable through the appointment of a Special Presidential Envoy for Libya. There would be many benefits to such an appointment, and there are indications that the transition team, demonstrating the incoming administration’s attention to Libya, is examining such an option. In particular, Phillip Escaravage, who has significant experience with US policy towards Libya, is rumored as being considered for such a position.

The appointment by President-Elect Donald Trump of a personal envoy to Libya would elevate US engagement and send a strong message to regional actors that are pursuing their own self-interests in the country. Given the goodwill expressed by many Arab leaders toward Trump, it would be hard for them not to comply with a personal envoy sent by him. The envoy could convince Egyptian President Abdel Fattah al-Sisi that his country’s interests are better served by a solution to the Libyan crisis rather than continued conflict exacerbated by the ambitions of his proxy, Field Marshal Haftar. Such an appointment, which would demonstrate US determination to solve the crisis on the ground, would be seen by Libyan actors as a positive sign. It could encourage those willing to work toward a solution and discourage those who think that the status quo or an all-out war are preferable outcomes.

This would also send an important message to European allies engaged in Libya. A US Presidential Envoy to Libya would carry heavier weight to coordinate actions with major European allies. The envoy would also be able to pressure European allies to prevent them from engaging in self-interested actions in Libya that could weaken international negotiations effort.

The effectiveness of US engagement in Libya would also be strengthened by the fact that a presidential envoy to Libya would have the authority and the prestige to coordinate the actions of all US agencies involved with the Libyan issue. This capability, which the current State Department envoy to Libya is lacking, is crucial, as it would allow for a determined and cohesive US policy to further empower the negotiation process and ensure a coherent outcome. The presidential envoy should work to revise the Skhirat agreement in coordination with the UN representative Kobler and the other special envoys, but mostly with an expanded group of Libyan negotiators that would include leaders of the main militias, influential civil society leaders, and representatives of former Qaddafi sympathizers.

Why should Trump increase the level of US involvement in Libya? The Obama administration’s engagement with Libya was dictated in 2011 by humanitarian reasons and in 2016 by counterterrorism factors such as the fight against ISIS in the country. While President Barack Obama did not want to intervene in Libya, the situation on the ground forced him to act, albeit timidly and partially. The same reasons may soon arise and force the Trump administration to do the same. There is no doubt that if the current situation in Libya is protracted, the population will be left with no choice but to try to emigrate both within the country as well as abroad. The humanitarian crisis would necessitate an international response. The spread of terrorist organizations—for which Libya is a sanctuary for arming, regrouping, and training, to the neighboring states—could also force an international response. The consequences of an increase in insecurity coupled with a regional economic crisis could be of such magnitude that the United States would be dragged into intervening, in ways unforeseen as yet, in order to protect its allies in the Mediterranean area.

Since it has become clear to all that terrorism and criminality are a consequence, rather than a cause, of Libya’s instability, it is apparent that stabilizing Libya is the key. The only way to reach this objective is through an agreement between the main actors within the country and between their sponsors abroad. The most secure and fast way to reach such an objective is through a more coherent and engaged US approach that uses the influence of the president to coopt Libyan factions into a real inclusive peace negotiation and ensure the inability of recalcitrant spoilers to sabotage the future of Libya. The consequences of a protracted crisis or of the collapse of any pretense of order in Libya would have negative and unpredictable consequences on the countries of the region. It would also be highly detrimental to US and Western interests in the fields of oil, counterterror, and migrants. The interest of the main global superpower to avoid this eventuality is apparent.

Karim Mezran is a resident senior fellow at the Atlantic Council’s Rafik Hariri Center for the Middle East.