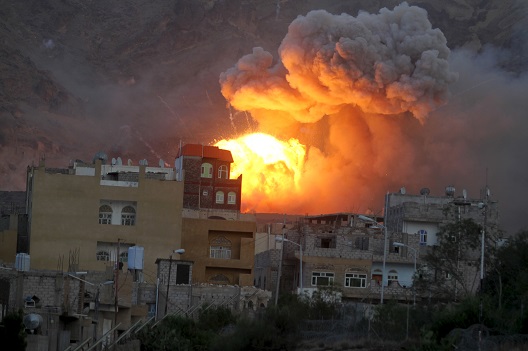 Fire and smoke billows from an army weapons depot after it was hit by an air strike in Yemen's capital Sanaa May 11, 2015. (Reuters)

The recent victories of Islamist and jihadist forces in Syria portend the possible demise of the Assad regime, but also the advent of a potentially vicious internecine struggle within the jihadist front and between it and the more secular nationalist rebel movement. Any continued or new military intervention by regional powers would only make matters worse. In Syria as in Yemen, the time for US leadership has come and gone. Yet the upcoming Camp David summit for Arab Gulf leaders nevertheless presents an opportunity for the Obama administration: Reassure the Gulf countries that their security is important to the United States while starting a serious discussion of a new grand strategy for the Middle East.

Two years ago, I argued that political Islam was coming into its own and asserting itself in the Arab republics whose dictators had been upset by the Arab uprisings. The rapid rise of Islamists in Egypt, Libya, Tunisia, Syria and Yemen quickly gave way to a severe backlash driven by their failure to participate productively in democratic governance. Counter-revolutionary forces of old regimes stepped in with a vengeance, most evident in Egypt, Syria, and Yemen. Yet denying moderate Islamists a role in shaping the future of their respective countries has proven costly to the region. Jihadist extremists take center stage in Libya and Syria and threaten stability in Egypt and Yemen. One way or another, this is an Islamist era; one where secular authoritarian regimes are seriously challenged, secular liberal forces are too small to matter, and where religion and political Islam will have an impact in shaping the short- and medium-term future of the region. Reisisting this trend has led to increased conflict along the lines of the Thirty Years War that threatens to leave the region in turmoil for generations.

The Thirty Years War, as defined by the Encyclopedia Britannica, was a “series of wars fought by various nations for various reasons, including religious, dynastic, territorial, and commercial rivalries. Its destructive campaigns and battles occurred over most of Europe, and, when it ended with the Treaty of Westphalia in 1648, the map of Europe had been irrevocably changed.” This is very much the case in the twenty-first century Middle East. Religious extremism struggles with dynastic dictatorships for control of the region’s resources; tribal wars reflect territorial ambitions of their chiefs in total disregard of building a modern state; well-established states are locked in bitter rivalry out fear of losing control rather than out of any genuine belief that they could reshape the region for the better. The Thirty Years’ War did not totally resolve the conflict between the various socioeconomic forces in Europe; it took two more centuries of revolutions and wars before Europe settled on a course that led it to democracy and prosperity. It may well take that long for forces struggling for power in the Middle East to resolve their conflicts, unless they learn from history and jump to the end game with skillful diplomacy.

The end game means that Iran and Saudi Arabia move beyond the regional competition that contributed to a destabilized Syria and Yemen. In Syria, the jihadist front consists primarily (though not exclusively) of the Islamic State (ISIS or ISIL), the Nusra Front, and Jaish al-Islam (a coalition of Islamists led by Zahran Alloush). While ISIS still holds solid ground in the central and northeast Syria, Nusra has made headway in the southeast and, in cooperation with Jaish al-Islam, in Damascus suburbs and northwest Syria. Recent Islamist gains inside Damascus (Yarmouk Camp) and in Jisr al-Shugur pose a serious threat to the Assad regime in Damascus and in the Alawite mountains. A decisive battle may have already started in Qalamoun along the Lebanese border, a front once settled in the regime’s favor by Hezbollah, but no longer so. Two scenarios present themselves: Iran and Hezbollah could dig in and throw everything they have to preserve the Assad regime, starting with Qalamoun and Damascus. Given the recent assertiveness seen on the GCC front, this could result in a long-lasting region-wide conflagration. The second scenario is that Hezbollah and Iran would finally let Assad go, but continue fighting ISIS to weaken their control in both Iraq and Syria. Some speculate that the rejuvenation of the jihadist front in Syria has benefited from fresh arms and funds from the Gulf. The new leadership in Saudi Arabia is anxious to reassert its authority in the region. To that end, they have opted for a military solution in Yemen and have shown every intent to press that war to the finish, with or without US support. Likewise, if Obama offers no help in Syria, Gulf states might have ideas of their own on how to press for the end of the Assad regime.

Obama faces a historic opportunity at the upcoming Camp David summit. A bold diplomatic strategy to get Iran and Saudi Arabia working together instead of at odds with one another could put the region on an entirely new track. It starts with Yemen, where the delayed show of force (failing to anticipate and deter the Houthis) by the GCC and the United States has led to an unfolding humanitarian disaster. US diplomatic leadership is required to get Iran and Saudi Arabia to each lean on their friends and allies in Yemen to stop fighting, come to the table at a neutral venue, and agree to a federal democratic future for Yemen. This presumes a cessation of the air war launched by Saudi Arabia and the agreement by Iran to stop all attempts at resupplying the Houthis. The vested interests of the same two regional powers, Iran and Saudi Arabia, in the futures of Iraq and Syria require that they agree on a mutually acceptable future for those countries. This may seem like a pipe dream at this point, but the alternative to a grand design is decades of religious, tribal, and military confrontations that the Middle East—and the world—can ill-afford. If Obama modestly tries to only sell the nuclear P5+1 agreement, the Camp David summit will end with a whimper rather than a bang.