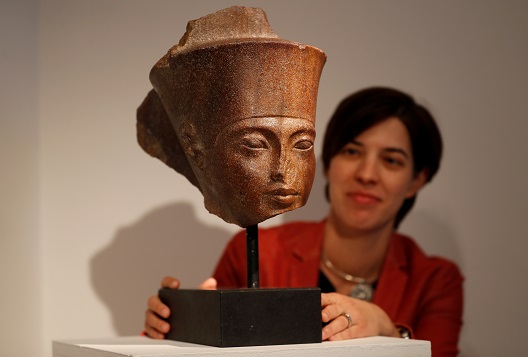 This week, Egypt has commemorated the 67th anniversary of the expulsion of King Farouk, the last conduit for British control and exploitation of Egypt, and the establishment of the Egyptian republic. The generations who witnessed and participated in the struggle against imperial Britain are no longer alive. Yet widespread aversion to that earlier period still runs deep among Egyptian citizens and officials.

So, it came as no surprise that when Christie’s—the London-based French-owned auction house of fine art and antiques—sold a sculpture more than 3,000-years-old of Pharaoh Tutankhamun earlier this month, it provoked anti-colonial sentiments and revealed Britain’s continued imperial and entitled worldview.

The British Government responded to the Egyptian government’s condemnation of the sale-to-be by stating that the auction would proceed “in accordance with the law,” and claiming that it is entirely a Christie’s affair. To defend the sale, Christie’s pointed to “a long-standing and legitimate market for works of art of the ancient world.” This defense suits an industry whose raison d’être is to maximize its revenue, but skirts the ethical issues of the sale of national artifacts without the consent of the indigenous communities and government to whom the articles of cultural heritage belong. Deferring to an auction house on this matter was myopic on the British government’s part.

The 1970 UN Convention on the Means of Prohibiting and Preventing the Illicit Import, Export and Transfer of Ownership of Cultural Property was established after imperialist countries had for centuries irrevocably damaged and removed countless invaluable articles of cultural heritage that belonged to former colonies. The Convention’s efficacy and scope is limited by its centuries-late implementation and its failure to apply its provisions retroactively. From the outset, the Convention had limited utility in protecting the rights of former colonies.

Furthermore, the Convention was established in response to increased looting of archeological sites and museums located in countries in the South around that time. It would be shameful to assume that crimes committed prior to 1970 could be absolved simply on the grounds that the Convention is incapable of dealing with them.

A more refined perspective on the issue is needed.

In 1891, Eugène Grébaut, a French Egyptologist, sent a workforce into the temple of Ramesses II at Medinet Habu, across from the city of Luxor, to remove the remains of an ancient Coptic church. His instruction as director of the Département des antiquités égyptiennes was an official act, but it was, by scholastic or humanitarian measure, vandalism of an archaeological site and a desecration of an ancient, sacred place.

Grébaut disdained “the wretched Copts” and rejected any connection between living and ancient Egyptians. This church in the middle of a pharaonic-era temple threatened his worldview, so he destroyed it. In doing so, he also sabotaged scholarship for everyone. Whatever knowledge might have come from the church site is gone. Now anyone who seeks a relationship with Medinet Habu, through community or study, suffers from his contempt for living Egyptians. Nonetheless, Grébaut’s order was legal.

Indigenous people internationally are familiar with this kind of contempt and destruction. It is still an ordeal for indigenous communities, such as those in Australia, to obtain repatriation for their late kin’s remains or prevent the destruction of their sacred places, or, as in North America, to halt the infrastructural neglect or pollution of their drinking water. These examples and innumerable more cases demonstrate a key principle of contemporary anthropology: laws that colonizing powers make cannot reliably defend the dignity, needs, or humanity of indigenous people.

Anthropological, and particularly postcolonial, ethics demand that researchers act with care and respect beyond what laws may dictate. These ethics expect researchers to pursue their work responsibly and contribute to healing the harm that their predecessors caused. Many scholars call this double obligation “decolonization,” and—except for arguably a few elder structuralists who retained their positions through the “reflexive turn” of the late 20th century—it is an ethical norm in anthropology.

These contemporary anthropological ethics are arguably the closest that principles in any European discipline so far have come to agreeing with indigenous communities. To many indigenous scholars, current anthropological methods are uniquely equipped to respect and incorporate their perspectives in otherwise Eurocentric landscapes of knowledge. Many indigenous scholars use anthropological methods because, as Linda Tuhiwai Smith noted, “these approaches have shown enormous concern for our origins as peoples and for aspects of our linguistic and material culture.” Specialists in other fields who interact with indigenous people would do well to take guidance from anthropology in this regard.

Anthropological ethics would not accept temporally limited, codified laws as complete justification for the recent auction at Christie’s. The reference that Christie’s made to “a longstanding and legitimate market…in which Christie’s has participated for generations” is self-referential. The current market for antiquities is generations old because colonialism is generations old. Basic respect for indigenous rights to heritage would entail seeking consent for the sale of an item from its indigenous inheritors. According to anthropological ethics, without such consent, the intended seller would return the item. In this case consent is prominently absent.

Scholars in many disciplines commonly further recommend repatriating every object acquired under disputed conditions. This recommendation involves both dismantling the “legitimate market” that Christie’s operates in and even reconfiguring how museums acquire their collections. For as Katarzyna Januszkiewicz highlights, “…the dirty secret of museum collecting…seeping out into the international public sphere…is the acquisition and incorporation of stolen and looted artifacts…a practice as old as the very institution of the museum itself.”

While decolonization reflects concern for indigenous people’s dignity and well-being, it also protects education. The dismissal of heritage rights by actors aligned with former metropoles undermines the trust that researchers work hard to build with the people from whom they learn. The Egyptian government may respond to this breach of trust due to the Christie’s auction by imposing sanctions on British archaeological projects in Egypt. As Egyptians have been among the most vocal proponents of indigenous rights internationally, many indigenous people globally would likewise stand alongside Egypt and these sanctions.

Many indigenous communities and scholars will watch and remember how European authorities handle this dispute. That the British government ignored the protests of an internationally recognized nation-state raises concern about what else colonial powers will continue to disregard.

If a seat at the United Nations is not enough to command respect for heritage rights, then it is no wonder that so many indigenous communities—without that leverage—continue to suffer basic violations of sovereignty. It seems that in spite of a nation’s independence, and in spite of international scholars, much of the colonial worldview that fueled Grébaut’s destructive contempt remains.

Amal A. Kandeel advises international, government, and private organizations, and is a nonresident scholar at the Middle East Institute.

Noor Sullivan is an Egyptian-American indigenous theorist and anthropologist.

Image: Photo: Laetitia Delaloye, head of antiquities of Christie's, poses for a photograph with an Egyptian brown quartzite head of the God Amen prior to its' sale at Christie's auction house in London, Britain, July 4, 2019. REUTERS/Peter Nicholls