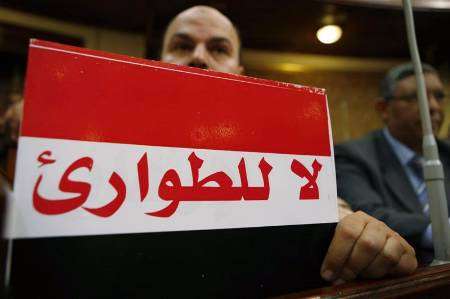 Field Marshall Mohamed Hussein Tantawi announced today on Egyptian state television the Supreme Council of the Armed Forces’ (SCAF) decision to lift the state of emergency, to take effect on the anniversary of the January 25 revolution, “except in cases involving thuggery.” The announcement came against the backdrop of plans for massive demonstrations by political parties and revolutionary groups to reiterate the demands of the revolution for improved economic conditions, freedom, and social justice. Tantawi’s announcement, apparently an effort to ingratiate the SCAF to the general public by offering more freedom of assembly, has effectively offered no change to the legal implications of the existing state of emergency.

The Mubarak regime continuously extended Emergency Law 162/1958 since 1981 under which state security forces have detained and tried thousands of political dissidents and rights activists. After Mubarak’s ouster, the SCAF unilaterally extended the Emergency Law set to expire on September 30 last year with the release of Decree 193 that expanded its scope of vaguely worded offenses and would keep it in effect through May 2012. After promising to abolish the law, then-Prime Minister Essam Sharaf, deflecting popular outcry against the decree, also at the time assured critics that emergency laws will only apply to ‘acts of thuggery’. The latest announcement in this context seems only to restate the long held position of the SCAF to maintain a pretense for crackdowns on civil disobedience and continued military trials.

The announcement will undoubtedly inflame the passions of activists and protesters who the SCAF has recently portrayed as “thugs” in an attempt to marginalize the protest movement and justify the use of excessive police and military force to suppress participants. Heba Morayef, Egypt researcher for Human Rights Watch, blasted Tantawi on her Twitter feed saying, “…concession #3 on lifting emergency law […] meaningless & not even original,” referring to Mubarak’s limiting of the state of emergency to drug dealing and terrorism in May 2010. It remains to be seen if the interim government will transfer the five current cases before the State Security Emergency Court to regular courts.

Coming just a day after the People Assembly’s first session, Mohamed El Baradei, Nobel laureate and former candidate for the Egyptian presidency, called on the parliament to “abolish repressive laws,” and ensure the independence of the judiciary and the media as a first order of business before drafting the constitution. One political activist told the Atlantic Council that El Baradei’s supporters will pressure the People’s Assembly to abide by the fundamental demand of the revolution and repeal the Emergency Law. Under the provisions of the law, the president – in this case the SCAF – can initiate or lift the state of emergency (Article 2), but under the interim constitution the decision requires majority approval by the People’s Assembly to take effect (Article 59).

Article 59 of the interim constitution, in fact, provides the People’s Assembly the opportunity to review the terms or even strike down the declared state of emergency. Many activists see the Emergency Law issue as one of the first tests of the parliament to abide by the demands of the revolution to finally repeal one of the most repressive tools in the ruling authority’s arsenal. Should the parliament reject the declaration of the state of emergency – and by extension, Decree 193 – it would open the political space for peaceful dissent, but could also set the Islamist-dominated parliament on a collision course with the SCAF.

Despite the Muslim Brotherhood’s reluctance to antagonize the interim government, this issue not only represents a core demand of the revolution but also the chance for the Brotherhood’s Freedom and Justice Party to flex its political muscle. Tantawi’s message today may have meant to ingratiate the SCAF to the public for the January 25 anniversary by suggesting greater freedom, but he may also have inadvertently conceded a major tool of control by calling attention to it.

Tarek Radwan is a visiting fellow with the Rafik Hariri Center for the Middle East and a blogger for EgyptSource.