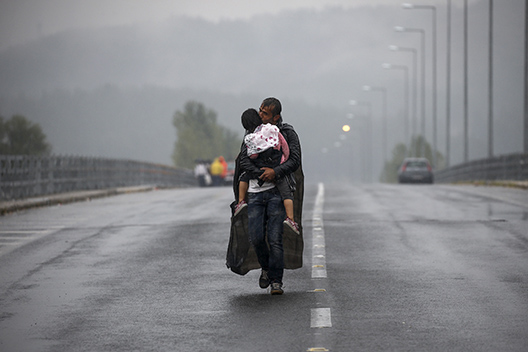 This article is remarks by Ralf Fuecks, president of the Heinrich-Böll Foundation, presented at the Foundation’s 17th Annual Policy Conference on June 17, 2016.

We cannot quarantine ourselves from the instability that reigns south and east of Europe. Europe must strike a new balance between idealistic foreign policy and realism. The opening address of the  17th Annual Foreign Policy Conference.

This is the 17th Annual Foreign Policy Conference of the Heinrich Böll Foundation – it has become a proud tradition. During the past 17 years, the world has become a more complicated, more confusing, more crisis-ridden place. At the same time, the boundaries between domestic and foreign policy are becoming increasingly blurred. The recent mass migration to Europe has made it clear once again: What happens in Africa, in the Middle East or in Eastern Europe immediately impacts the social and political situation in our own country.

The motto of our conference is “Europe on a Peaceless World”. This title almost makes it sound as if Europe were a rock of stability in a stormy sea. But that would be a stark misinterpretation. Global vagaries have long reached Europe. Cracks are beginning to show in the woodwork of Europe.
What seemed unthinkable until recently can no longer be ruled out today: A process of continuous disintegration, driven by centrifugal nationalist forces, economic discrepancies and anti-democratic movements. Observers from other regions of the world are viewing the EU as a project at the verge of failure, most with concern, others gloating with satisfaction.

Who could have predicted just a few years ago that we would be biting our nails as we await a British referendum on leaving the EU; that Austria would only narrowly avoid a staunchly right-wing nationalist President, that Marine LePen would be knocking on the door of the Elysee Palace in France, that strictly anti-liberal governments would be in power in Poland and Hungary, that a clear majority of European governments would be driving a hard line of refugee deterrence, and refugee shelters would be under attack once again in Germany?

These symptoms of crisis are partly home-grown; in part they reflect changes in our international environment. So let’s take a look at the geopolitical situation.

A mere fifteen years ago, Germans would vacation in the Southern Mediterranean region without thinking twice about it: Scuba diving in Egypt, archaeological tours to Palmyra, club vacations in Turkey or Tunisia. This carefreeness is gone, at least for now. Today, the Middle East is associated with radicalization, war and terror, which is as distorted an image as the seeming stability from before, which was assured by authoritarian regimes à la Mubarak. And yet, there is more than just a kernel of truth to this perception.

The EU is standing on the rubble of its neighborhood policy. Instead of being nestled in a ring of stable, more or less democratic states, Europe is facing an expanse of crisis spanning all the way from Ukraine via Turkey, Syria, Lebanon, Egypt, Libya and Tunisia to Algeria.

So far, Europe has felt the fallout from this crisis in the shape of hundreds of thousands of refugees and attacks by radical Islamists. We were prepared for neither, even though the writing had been on the wall for a while.

The European peace order is crumbling, as well. Russia’s annexation of Crimea and the covert intervention in Ukraine were a nasty shock. Simulations of nuclear attacks and other instances of Russian saber-rattling have put NATO on alert. A new spiral of armament and flexing military muscles is looming.

In Syria as well as in Eastern Europe, Russia behaves like an interventionist superpower. In both cases, Russia is both rival and negotiating partner to the West in its efforts to stabilize the situation by diplomatic means. This ambivalence of limited conflict and limited cooperation will likely continue to shape our relationship with Russia in the years to come.

The desire to return to a mostly conflict-free “strategic partnership” with Russia is understandable but misguided, as it misjudges the situation. The short phase in Russian politics when integration with, or at least a reasonable rapprochement to the West seemed possible, is over. This is true for domestic as well as foreign policy. Domestically, today’s Russia is an authoritarian power. Internationally, it is a revisionist force and the center of an anti-liberal Internationale as well as a geopolitical antagonist to the USA trying to compensate its economic weakness by military power.

But it would also be misguided and dangerous to write off any hope of cooperation with Russia. We are not at the brink of a new Cold War. Rather, we should follow this mantra: as much cooperation as possible, as much willingness for conflict as necessary. Containment and deterrence are as much part of the of Western policy toolkit towards Russia as cooperation and balancing interests.

One thing must be clear, however: Germany cannot and must not seek conciliation with Russia at the expense of Central and Eastern European “buffer states”. Ukraine, the Baltic States, Georgia and Poland may not be abused as pawns on the superpowers’ chessboard. Hopefully, the times when Europe was sectioned into rivalling spheres of interest are gone for good.

The conflict currently brewing in East Asia, which is perhaps most dangerous one at a global political scale, has barely entered European consciousness yet. It is fueled by conflicting territorial claims made by China and other nations around the South China Sea, revolving around access to raw material deposits and controlling trade routes. The underlying context of this conflict is the future power relationship between the USA and China. US foreign policy has shifted towards Asia in an effort to curb China’s ambitions and defend US interests in the Pacific.

European states have inadvertently been dragged into this conflict. Europe has a strong self-interest to control the risk of a military conflict in East Asia, foster cooperation and keep trade routes open. This requires a proactive policy towards Asia – from which we are still far removed.

And with this, I have come to the general theme of our Annual Foreign Policy Conference: How do we craft a new international order based on international law and cooperation? Is Europe ready and able to play an active role in the world, and act as a regulating power towards our neighbors to the East and South? One thing is for sure, America will no longer assume this role on our behalf.

The example of Syria highlights the issue in all its severity. Unwilling to intervene, Europe is watching the Syrian tragedy unfold – that is, if we aren’t looking away altogether. The flux of millions of refugees from this scourged country was not understood as a wake-up call for a more active policy towards Syria. Previous diplomatic efforts were little more than a smokescreen, behind which the daily massacres of civilians continue day after day.

Yet other than Syrian civilians, no one has a greater interest in a peaceful Syria than Europe. Washington’s national interests are not directly impacted by the war in Syria, Moscow only wants to maintain the Assad regime. Iran, Saudi-Arabia and Turkey are pursuing their own regional power interests. What is lacking is a willingness on the part of the EU to throw its weight fully behind attaining a durable ceasefire and enforcing a political solution. Such an initiative has been complicated further by the intervention of Russia – it won’t make matters any easier if we continue to stand by idly.

The global order that emerged after the end of WWII and the Cold War is in upheaval. It is being challenged by powers that have regained their strength, such as China, Russia and Iran, as well as by non-state actors like the “Islamic State”. Geopolitics has returned to the world stage.

For us, this diagnosis holds some uncomfortable truths. We must acknowledge that politics of power have not just vanished and been replaced by a rule of international law. Not all conflicts can be settled with money and wise words.

Which does not mean that we should abandon a normative, value-oriented foreign policy – not at all. Yet Europe must strike a new balance between idealistic foreign policy and realism. We should powerfully represent our interests without betraying our values.

Another unpleasant insight is that we have reached the end of that the fair-weather period during which the Federal Republic could enjoy the financial benefits of falling defense expenditures year after year. Security does have a military component, and if we are unable to enforce it when necessary, international law is but a toothless tiger.

At the same time, it is clear that there is also a close correlation between security and justice in international policy. In a world that is marked by stark inequities, with both winners and losers of globalization, with billions of people who are hopeless that their situation will ever improve, there is no such thing as permanent stability and security.

We must therefore add a new category of “human security” to the classical term of national security: There is an increasing social and ecological dimension to security policy, especially in the age of climate change. Violence thrives in an atmosphere of uncertainty, fear and peril. We must therefore do everything in our power to create an atmosphere of trust, cooperation and hope for a better future.

Europe’s southern and eastern vicinity contains zones of instability from which we cannot isolate ourselves. Europe is faced with the choice of either starting to act as a regulating power or fall victim to destabilization itself. I am using the term “Europe” deliberately, because no single European state is able to tackle these challenges alone. If we are to play a more active, impactful role, we will need more foreign-policy cooperation and coordination within Europe.

Germany is expected to play a more active role in regards to major foreign-policy issues – not unilaterally, but in concertation with others. The general public is skeptical about this. The obligations that come with political alliances are unpopular, as is obvious in the current debate about a stronger NATO presence in Eastern Europe. Yet they are the prize for our own security, which can only be guaranteed in alliances with other states.

What we cannot predict yet is the outcome of the US Presidential elections. Either way, it will have a major impact on America’s global role. Depending on the outcome of the British referendum and the contest between Hillary Clinton and Donald Trump, we might be skidding into a period of damage control, with our top priority being the prevention a double meltdown: the disintegration of both the European Union and of the Transatlantic Alliance.

Both events together would be paramount to a collective suicide of the West. In times of global political turmoil where liberal democracy is challenged from within and from without, we need democratic alliances more than ever before. Not as a bulwark against the rest of the world, but as the heart of a global alliance that champions the principles set forth in the Charter of the United Nations as well as the Declaration of Human Rights.

We may want to turn a blind eye to global conflicts, but they won’t ignore us. In a world that is closely interconnected by trade, the internet and migration, an isolationist attitude is not a realistic perspective. In the words of Heinrich Böll: “Getting involved is the only way to stay realistic.”

Image: A Syrian refugee kisses his daughter as he walks through a rainstorm towards Greece's border with Macedonia, near the Greek village of Idomeni, September 10, 2015. (Yannis Behrakis/Reuters)