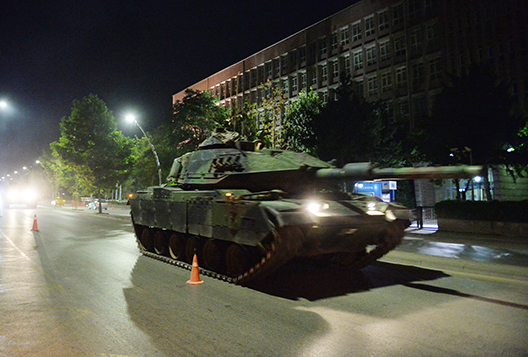 The failed coup attempt last Friday challenged a number of key assumptions about the Turkish Republic. Turkey, a NATO ally since 1952, has always been a difficult partner for the United States to work with. However, its shared border with the Middle East has, since 1991, made it an important component of US combat operations, first during the first Gulf War, and, now, in the air war against the Islamic State (ISIS or ISIL). The United States has a strong interest in Turkey’s political stability, particularly now that Iraq and Syria are mired in protracted civil/insurgent conflicts, and other key countries in the Middle East remain unstable. The coup has revealed that key institutions in Turkey are divided, as evidenced by the scale of the military plot to topple the ruling Justice and Development Party (AKP). These divisions are linked to recent events in Turkish history and are certain to destabilize Turkish politics and institutions in the near term.

The Turkish government blames Fetullah Gulen, a self-exiled cleric in Pennsylvania for orchestrating the plot – and has taken rather dramatic steps to purge his alleged followers from the bureaucracy. These recent actions come after the tactical alliance the Gulenists and the AKP had struck broke down in 2013, a process that prompted the first wave of Gulenist linked purges of the bureaucracy between 2014 and the start of last Saturday’s coup. The AKP, however, had previously relied heavily on Gulenist networks in the bureaucracy to govern the country and to isolate Kemalist bureaucrats. This cycle of empowering Gulenists and then taking dramatic steps to purge them contributed to Turkey’s recent troubles and the fracturing of key institutions, including the military.

On early Saturday morning, Turkey time, the plotters managed to take Turkey’s Chief of the General Staff, Hulusi Akar, hostage, before at least 24 aircraft participated in the coup. In the most visible component of the air campaign, six F-16s, flew from Akinci air base, located just 12 miles north of Ankara. Four tankers, based at Incirlik, the hub for the US led mission to combat the Islamic State, refueled these jets. At least six helicopters also participated, with some probably flying from Akinci, and three from Cigli, an air base near Izmir. These air assets bombed parliament, the headquarters for Turkey’s special police forces, and the Presidential palace.

Loyalist aircraft from at least three other air bases were sent to hunt for the coupists, resulting in the shooting down of a helicopter involved in the plot. The totality of the assets involved suggest that a significant number of people were involved, defying the current narrative that this was a small sliver of the armed forces, acting independently from the chain of command. The coupists were certainly acting on their own volition, but the number of aircraft and vehicles involved – as well as the geographic locations from which the aircraft flew and conducted missions – points to a relatively large number of people involved in this plot.

This is not the first coup plot to fail in Turkey. Following the 1960 coup, for example, Colonel Talat Aydemir spearheaded two coups in 1962 and 1963, but – like the most recent coup attempt – failed to win the support of the Turkish high command. The Turkish military, during this time, was divided – much like today – and ultimately took steps to prevent “factionalization” within the institution, beginning with a purge of 1,400 of Aydermir’s reported sympathizers from the military academy in 1963 and 1964.

The military more or less, remained unified thereafter, albeit while still meddling in Turkish domestic politics. The next intervention took place in 1971, through the issuing of a memorandum that forced the resignation of the then elected Prime Minister, Suleyman Demirel, and then again in 1980. The former intervention was well planned and relied heavily on the show of force in the streets to prevent unrest and, later, mass arrests. The subsequent constitution enshrined much of Turkey’s current political system and prevented the factionalism within the armed forced that led to instability within the armed forces during the 1960s.

The military, in 2007, posted a memorandum challenging the legitimacy of the AKP’s then candidate for president, Abdullah Gul, because his wife wore a headscarf. The Turkish military has traditional viewed its role as guardians of Turkish secularism, a concept that includes other political tenets – known as “six arrows” – that collectively are defined as Kemalism. The constitutional court implicitly backed the military, as did the main opposition party, the Republican People’s Party (CHP). The AKP subsequently called a snap parliamentary election, calculating that the public would side with them, and ultimately won 341 seats, an increase from their previous position, and easily exceeding the number of seats needed to elect Gul.

This incident proved the political popularity of the AKP and galvanized efforts to pass a change to the constitution that would allow for the direct election of the president, rather than having it voted in parliament. This amendment was put to a referendum in 2007 and had the backing of a key AKP ally at the time, the Fetullah Gulen movement. The two movements have different religious outlooks, despite both being “Islamist” in their political outlook. Gulen is also a political opportunistic who has, at different times in Turkish history, struck tactical alliances with different ruling parties, regardless of ideology.

The AKP-Gulen alliance, however, differed in that it relied heavily on Gulenist cadres at the outset of its rule to replace kemalist bureaucrats, deemed a coup risk by the AKP leadership. For close to ten years, the AKP welcomed Gulenist participation in the bureaucracy and, particularly in Africa, relied heavily on the Movement’s global network of charter schools to augment Turkish foreign policy goals.

This alliance reached its peak following the Gul controversy. In the aftermath of the military’s referendum and the AKP’s success in the snap election, Gulenist prosecutors oversaw the investigation and trials of two alleged coup plots, which resulted in the detainment and lengthy trial of hundreds of officers for allegedly conspiring to overthrow the AKP. These trials continued for years, despite considerable evidence to suggest that key documents were fabricated. Turkish President Recep Tayyip Erdogan disavowed these two trials in early 2014, following a very public split with the Gulen movement in December 2013. The AKP and the Gulenists had been at odds over elements of the AKP’s domestic and foreign policy since 2011, but managed to prevent a total collapse in the relationship, until the Gulenists released numerous audio recordings, the most controversial of which implicated the president and his family in graft.

This split eventually prompted a massive crackdown on purported Gulenist sympathizers in the bureaucracy and, in late 2014, authorities specifically defined followers of Fetullah Gulen in the bureaucracy as a terror to the Republic, and included Gulenists in the “Red Book,” the country’s national security document. Before the attempted coup last week, scores of reported Gulenists were fired, or transferred to remote postings in Turkey, most likely with the intention of forcing them to quit. The Turkish government also seized media and financial institutions affiliated with the group.

This cycle of empowering the Gulenists – within the bureaucracy and with the two coup trials – and their subsequent purging has fractured the Turkish bureaucracy, including the military. The military hierarchy has apparently been under extreme pressure ever since the start of the two coup trials, when hundreds of officers were charged. The break down in the AKP-Gulen alliance granted the military a reprieve, but the push and pull of purges and empowerment have taken their toll, and appear to be a key reason for a return to 1960s style factionalization amongst the top brass. This has led to stark differences amongst the officer corps, as represented by the near 30 percent of generals and admirals now detained. The ensuing uncertainty will certainly have an effect on the threat from the Islamic State. To compensate for expected leadership shortages, at least three officers the Gulenists previously put on trial for coup plotting have been recalled to active duty to replace officers purged following the violent uprising last Saturday.

Like during the 1960s, the Turkish military hierarchy is fractured, with vastly differing conceptions of the Turkish state, the rule of law, and the social contract underpinning Turkish politics. This suggests continued instability in the Turkish military narrowly, and the other institutions of states more broadly in the near term. At the same time, the state is conducting another series of mass purges or suspensions of those accused of being linked to the Gulenist movement. To date, over 9,000 people have been detained, with 30,000 people working for various ministries placed on suspension since Saturday, July – 16, a cycle that threatens, while necessary in certain instance, will nevertheless exacerbate the same factors that contributed to the fracturing of Turkey’s military.