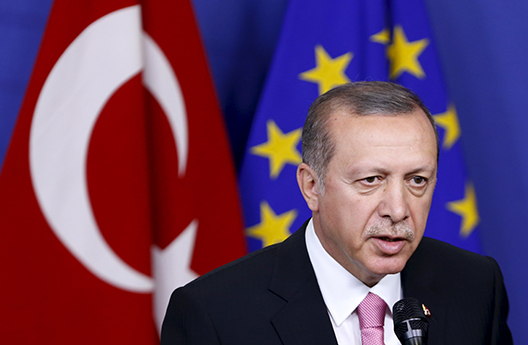 Turkish-European relations have declined considerably in recent years, with little progress made on the accession of Turkey to the European Union (EU) since formal negotiations began in 2005. Turkey’s actions following the failed July coup attempt and the rise of right-wing nationalist populism in the west further damaged any prospects of improving relations. The matter reached a new low when, in November, the European Parliament passed a non-binding resolution to temporarily freeze Turkey’s accession process.

Since July, the Turkish government has dismissed a total of 125,000 people from the military, civil service, and judiciary, 36,000 of whom have been jailed pending trial. While the EU is increasingly critical of Turkey’s actions, it is also dependent on Ankara to enforce the March 2016 refugee agreement meant to help stem the flow of refugee migration to the EU via Turkey—an issue that has propelled the growing appeal of right-wing populism in Europe.

There are signs that these tensions are influencing domestic European and Turkish politics, with political groups taking advantage of the downturn in relations to increase domestic popularity.

The Turkish government, led by President Recep Tayyip Erdogan, has blamed foreign powers for the coup and accused the West of supporting terrorism.  The anti-EU rhetoric adds to the narrative of the ruling Justice and Development Party (AKP) that the EU and many of its member states failed to show solidarity with Turkey following the failed coup attempt. In recent months, Turkey has also been critical of alleged European support for the Kurdistan Workers’ Party (PKK), a group fighting an insurgency against Turkish security forces in southeastern Turkey. In response to the recent criticism of Turkey—which includes well-researched reports on human rights abuses in the southeast and torture in certain prisons—Erdogan has threatened to open the border to flood Europe with migrants, to join the Shanghai Five, a loose union of five autocracies, or to hold a referendum on Turkey’s accession process – a populist move, built on years of rhetoric in Turkey that Brussels “needs Turkey, more than Turkey needs Brussels” to help overcome lingering economic challenges from the 2008 financial crisis.

In Britain, unfounded fears of immigrants and Turkey’s EU membership talks played a role in the Brexit debate. The broader immigration debate is also expected to play a prominent role in general elections in 2017 France and Germany, around the same time as a possible Turkish referendum on EU membership. These votes have the potential to define the future of the EU’s relationship with Turkey and vice versa.

In Germany, political parties are under pressure from large numbers of German citizens of Turkish descent, who together comprise an important constituency for different political parties, according to a study by Natalie Versieux in Le Temps. This study shows that these voters care most about strengthening relations between Turkey and Germany, the position of the German government on the Kurds, and integrating Turkey into the EU. However, German conservative parties are also under pressure due to the rise of a new far-right nationalist party, the Alternative for Germany (AfD). With a strong anti-immigrant platform and a fiercely anti-Turkish position, AfD made significant gains in regional elections held earlier this year beating even Chancellor Angela Merkel’s Christian Democratic Union (CDU) in her home state, Mecklenburg-Vorpommern. In response, Merkel directed her discourse towards German citizens of Turkish descent, recently asking them to choose between Germany and Turkey, following pro-Erdogan demonstrations in Cologne. Despite the challenge from the right, Merkel and her CDU have ample political incentive to reach out to German voters of Turkish descent or risk losing votes to Germany’s second largest party, the Social Democratic Party (SPD). Voters of Turkish descent are estimated to make up close to 5 percent of the German electorate – which constitutes around 3 million voters according to Les Echos. The SPD draws considerable support from these voters of Turkish descent, a fact that underscores the influence the ‘Turkish’ vote has in domestic German politics. In the 2016 regional election, for example, the ‘Turkish’ vote was an important component of the SPD’s victory in Berlin. The results flipped the ruling coalition in the local parliament from CDU-SPD to a leftist coalition composed of the SPD, the Greens, and the Left Party.

France has a different electoral dynamic, and therefore has traditionally been reticent of Turkey’s accession to the EU. The front runners of the French Election—the National Front’s (FN) Marine Le Pen and the Republicans’ (LR) Francois Fillon—belong to right-wing parties with a conservative voting base and have gained popularity by adopting a strong stance against immigration. Le Pen has capitalized on anti-Muslim sentiment in France, while Fillon has become the champion of Catholic values in France. While serving as then-president Nicolas Sarkozy’s prime minister between 2007 and 2012, Fillon’s position was that Turkey did not belong in the EU due to cultural differences. Fillon also believes that the EU deal with Turkey gave too many concessions to Erdogan. In the latest polls both candidates have been credited with 24 percent to 27 percent of votes ensuring their place in the second round, and the decisive elimination of the left. The election of Marine Le Pen could permanently change the EU and limit the chances that Turkey’s will join the EU, but even the more moderate—albeit still right of center—Fillon opposes Turkey’s EU membership bid.

The left is also unlikely to support Turkey in its endeavor to join the EU. Several major leftist leaders, like Jean-Luc Mélenchon in France, and Pablo Iglesias in Spain attended rallies to support the Democratic People’s Party (HDP), a leftist opposition with indirect links to the PKK, after the arrest of nine of their members. Jean-Luc Mélenchon also accuses Turkey of secretly supporting the Islamic State (ISIS or ISIL). These pro-Kurdish rallies were in explicit opposition to Erdogan’s crackdown on Kurdish majority political parties in Turkey, and were a show of support for the PKK or its Syrian branch the Democratic Union Party (PYD). In addition, a visiting delegation of European MPs to Turkey chose to attend the HDP’s parliamentary session in their solidarity with the arrested parliamentary members. They also attempted to meet with imprisoned HDP leader Selahattin Demitras but were prevented by Turkish authorities.

The rise of the far right is forcing debates about immigration and identity issues in numerous western countries. The elections in France and Germany, coupled with the authoritarian turn in Turkish politics, could bring a decisive end to any chance for Turkey joining the EU. While the end of the deal would seriously damage the relationship between both parties, maintaining the status quo is impossible.  A key test for the EU in order to reaffirm its credibility on the international scene will be its ability to adopt a unified response to the Turkish political situation.

Tancrède Fulconis is an intern at the Atlantic Council’s Rafik Hariri Center for the Middle East.