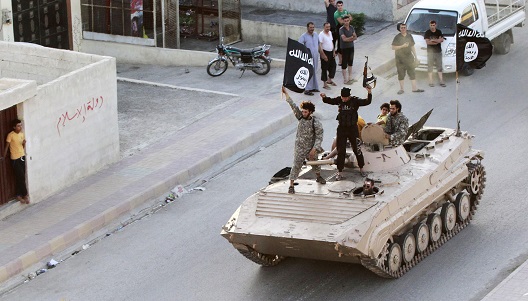 The Islamic State (ISIS, ISIL, Daesh) is a radical organization with vast capacity for recruitment and cultural domination – yet lacks its own literature, even a zealous, superficial manifesto. That is not a mistake or an oversight: the organization simply doesn’t need one. Daesh did not need to sow the seeds for the cultural dominance for its version of Islam and wait years to reap the rewards – it is reaping them now.

In the immediate runup to the Arab revolutions, political Islam was at the height of its cultural strength in Arab societies. Its overarching goals, such as the establishment of a caliphate and the implementation of Sharia law, were not open to criticism or debate. Long years of persistent religious advocacy, along with symbolic and physical violence against those who opposed it, made sure of that. Years of debate among religious scholars, domination of the mosques and the market for religious tapes and CDs, thousands of simplistic religious books, Islamic work with students, centers for Quran recitation, organized charity work, free medical testing services, heavily discounted clothes for women wearing hijabs, stickers posted everywhere urging prayer and repentance, open-air Eid prayers: all helped place religion at the heart of society.

Violent Islamic groups that emerged in Egypt in the early 1970s lacked deep-rooted support in society, giving them a sense of alienation that made them tend towards extremist views and the idea that society as a whole was heretical. But violence resulting from that same alienation was one factor that helped other groups root their ideas in society, by threatening those who tried to undermine their foundations.

Most members of Islamist student groups in 1970s Egypt, collectively known as the Islamic Group, joined the Muslim Brotherhood. But a significant minority went further, taking up arms in a bid to seize power. Years passed before the Egyptian regime was able to beat those groups militarily, empty them from the inside, and bring an end to their operations.

The Egyptian regime, from the assassination of president Sadat onwards, adopted a strategy of destroying the armed groups while simultaneously giving the Muslim Brotherhood, seen as a moderate Islamic group, space to operate and freedom to do advocacy work. The Brotherhood took advantage, creating a social base for itself. Its members were far ahead of their ideological rivals in terms of reach, organization, intellectual one-upmanship and intimidation of others, without ever coming close to posing an existential threat to the regime. The regime saw that as a magic formula.

Naturally, the Muslim Brotherhood was helped by a major emigration to the more conservative Gulf and its strong but not entirely political organizational capacities. That enabled it to attract members for reasons other than its political struggle, such as football games, Quran interpretation sessions in mosques and so on. During the final years of Hosni Mubarak’s rule, the regime tried to play the same game against the Brotherhood, empowering its Salafist rivals by opening space for them and giving them access to the media. Rather than challenging the Islamists’ power, this deepened their roots.

The result was Islamist cultural domination, fundamentally as a result of religious advocacy, not politics. Political movements that rise under certain circumstances, as in the case of violent movements generally, can be removed or beaten. But the Islamists’ decades-long preservation of their presence was not the result of a single, critical political moment.

It is significant that the most recent major socio-religious movement in Egypt was result of the emergence of Salafists in Mubarak’s final years, preceded by figures known as the “new preachers.” But with the Arab spring, the socio-religious gave way to the political, even within Islamist movements themselves. Revolutions across the Middle East gave rise to ambitions for change, including social changes at the expense of Islamic trends that had dominated the social order for decades, even as they remained outside the political power structure. Since the revolutions, Islamist social dominance has started gradually to deteriorate. Even if accompanied by political achievements, they will collapse quickly because the Islamists have already lost much of their social power.

With the defeat of the Arab spring and the Muslim Brotherhood, and Salafist retreat from the streets and the media, the deterioration of Islamist dominance accelerated. The regime’s focus on crushing the Muslim Brotherhood made it hard for any other group to take on the tasks it had previously carried out, in order to nurture long-term dominance. The major Islamist groups that remained were Salafists, and while they had not been incapacitated to the same level as the Brotherhood, they were unable to gain space for movement by claiming to be more moderate, given that their philosophical and social ideas were more extreme than that of the Brotherhood––despite their political pragmatism.

Daesh exploited this retreat, becoming the sole heir to the Islamists’ domination. But the organization’s fundamental problem today is that its domination is no longer spreading: it is simply feeding on leftovers.

Daesh has marketed itself as a movement able to make solid achievements and tackle its enemies at a time when other Islamists are on the retreat. The moment of its greatest victory, when it occupied Mosul city and announced its caliphate, reflected a long-standing dream of the Muslim Brotherhood. But Daesh’s overarching slogan and goal––“remaining and advancing”––is facing existential challenges.

Daesh was not a monster that rose through the recitation of mantras or from a sudden tidal wave. It was not born from a vacuum, but rather from long-nurtured ideas and a social incubator that was waiting for it. The group’s rapid development depended not only on its victories and achievements but also on its ability to exploit the widespread appeal of political Islamist and extreme jihadist ideologies in the Syrian war and before that in Iraq. It took a position to the far right of that discourse and was able to outbid and defeat its opponents, who are still hesitant about how to tackle it.

But the unique feature of Daesh’s rapid advances is that it appears to be on the brink of losing what it has gained. It has been beaten in many battles and lost several major cities. True, that retreat has been extremely slow, but it has cost the group its fundamental strong point (tackling its enemies) which is something Daesh could have dealt with if it had been able to broaden its intellectual influence in the societies it dominated. But the group was never concerned about that.

Most Daesh publications in print or video, directly target people for recruitment, using footage of killing, burning, and declaring others to be non-Muslims. The group has not effectively focused on creating a wide social acceptance of its ideas. In areas it controls, it has “educated” people with its ideas and doctrines. But social acceptance of its ideas was not the main reason it was able to occupy a city, nor was it a barrier it sees it has to overcome. That is to say, it does not see the leftovers of Islamist domination as anything other than a recruitment aid. It rather sees popular acceptance or rejection as not separate from its military ambitions.

As a military organization that markets itself as having revived the Caliphate, Daesh has no time for long-term planning. Either it carries on advancing, or it is finished––that is to say it will lose its ability to continue. Its core goal, restoring and maintaining the Caliphate, puts it in permanent conflict with the entire world. Re-structuring itself in keeping with new military realities in which it is defeated and restricted to certain borders, transforming it into just another nation state, would put an end to its attraction.

What is important here is Daesh’s inability to achieve major new military victories at the same time as Islamist clout in society has deteriorated. This must lead to its defeat in the long term. In theory this does not necessarily require Daesh to be decisively defeated militarily, but simply that it is prevented from making new gains. But the small space that remains for Islamist social clout is a major one as far as the terrorist group is concerned, especially if it is the only heir to that clout in a large country like Egypt where every other group has been crushed.

The best scenario would be that Daesh is prevented from making any new achievements and that the Islamists fade, especially if that were to coincide with the rise of democratic movements able to contain those marginalized by the regime and speed up the deterioration of the Islamists’ clout. That would create possibilities for democratic change that does not find itself facing the same existential problems faced by the Arab revolutions––the Islamists’ rise to power and the growing radicalism among both themselves and their enemies. That could make them open to negotiation and disarm each side’s attempts at a total victory over the other. It would leave space for the army to intervene and stabilize the public domain. In this scenario, the Islamists would remain, but hold much less clout than they had immediately after the Arab spring. They would therefore be more open to offering concessions and less keen to polarize the situation in a way that ends all hope.

The worst scenario is that Daesh’s retreat is only partial, not accompanied by the rise of other groups, and that space for Islamist clout erodes so slowly that it allows for the recruitment of remnants of those groups in order to keep fighting. That is accompanied by a general despair that leaves no option but joining the organization, or at least supporting it. The promises of Daesh, despite growing awareness that they lack credibility and that it is unable to live up to its claims, means it may be able to attract new recruits that allow it to persist for longer. That would place the world in an unstoppable vortex between dictatorial regimes and a terrorist group that vainly tries to defeat them. The group’s defeat in this scenario is very possible, but a new terrorist organization would rise in its place that will be less ambitious in its aims, leaving aside the idea of setting up a centralized state as a base for terrorizing the world, but making do with simply terrorizing the world––a goal that does not take much to achieve.

Belal Alaa is a journalist who writes for various Egyptian and Arab websites. He is the author of “The era of barbarian discourse”, an analysis of the struggles in Egypt’s political discourse from 2005-2015.