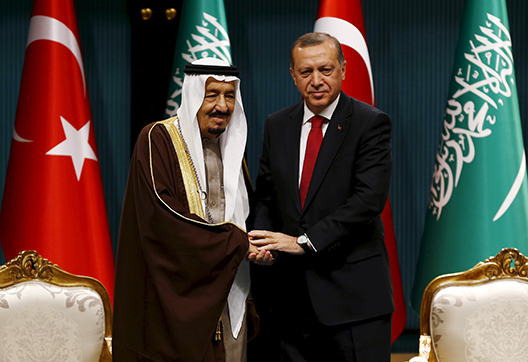 Gulf Cooperation Council (GCC) states hailed Turkish president Recep Tayyip Erdogan’s triumph over last week’s failed coup attempt. The Council’s powerhouse Saudi Arabia expressed support for Turkey’s “elected government” with “constitutional legitimacy.” By detaining Turkey’s military attaché to Kuwait on Sunday at Dammam Airport, at Ankara’s request, the Saudis also demonstrated their willingness to collaborate with Erdogan’s crackdown in the failed coup’s aftermath. The Emir of Qatar, Ankara’s close ally, meanwhile called the Turkish president to congratulate him on the “the support of the people of Turkey on his rule against the failed military coup.” Kuwait praised “the success of legitimacy and the victory of democracy.” Bahrain denounced efforts on the part of factions within Turkey’s military to challenge Erdogan’s “constitutional legitimacy.” The UAE’s foreign minister told his Turkish counterpart that Abu Dhabi “welcomed the return of Turkey to its legitimate and constitutional track.”

It is important to understand the GCC’s support for Turkey’s government within the context of Ankara’s role in Deputy Crown Prince Mohammed bin Salman’s grandiose project, the Islamic Military Alliance to Fight Terrorism (IMAFT). Announced last December, IMAFT aims to unite the Sunni Muslim world against the Islamic State (ISIS or ISIL), contain Iranian/Shiite influence in the region, and ultimately reshape the Middle East’s geopolitical order in line with Riyadh’s designs for the region as articulated by the Salman Doctrine. In February and March, in the first major practical expression of IMAFT, the Saudi leadership led a number of military drills involving 19 other IMAFT members, among them Turkey.

A new leadership in Saudi Arabia has brought with it a shift in Turkish-Saudi relations. In the final years of King Abdullah’s rule, Riyadh and other Gulf Arab states – save Qatar – appeared to view Turkey’s growing influence in the Middle East and North Africa with unease. Turkey’s deepening ties with Iran during the 2000s, which occurred within the framework of Ankara’s “zero problem with neighbors” strategy, fueled tension in Turkish-Saudi relations, as did the Justice and Development Party (AKP)’s rising ideological influence in the region.

Tensions between Turkey, Saudi Arabia, and the UAE came to a head in 2013 over the former’s support of the Muslim Brotherhood in Egypt after the ouster of then president Mohamed Morsi. While in the past year, Turkey grew geopolitically closer to Saudi Arabia and Qatar, substantial political friction continued to shape Ankara’s relationship with the UAE until very recently, despite Turkish-Emirati economic relations remaining strong. (The UAE is Turkey’s largest export market in the GCC and ninth largest worldwide). Turkey’s support for Morsi led to a diplomatic row in which the UAE withdrew its ambassador to Ankara in July 2013, with tension further increasing after the UAE condemned Turkey for shooting down a Russian fighter jet in November of last year. It wasn’t until April 2016, that Abu Dhabi appointed a new ambassador to Turkey after Turkish Foreign Minister Mevlut Çavusoglu announced in January Turkey’s acceptance of the appointment. In his statements, Cavusoglu downplayed tensions between the two countries, amid an attempt to normalize ties.

Since ascending to the throne last January, Saudi Arabia’s King Salman has prioritized the kingdom’s quest to counter Iranian influence over the weakening of the Muslim Brotherhood, which the Saudi King sees as less of a threat than his predecessor. The visits made by heads of Muslim Brotherhood branches from Jordan, Tunisia, and Yemen to Saudi Arabia last year highlighted an easing of tension between the kingdom and the Sunni Muslim movement in the MENA region. The Iran Nuclear Agreement is cited as the reason for the shift in Saudi Arabia’s priorities, and that the “détente” was an outcome of a calculation in Riyadh that the kingdom must choose between taking on what it views as the Shiite threat posed by Iran and its allies and “mainstream” Sunni Islamists.

Salman likely views Turkey as a pivotal actor in Riyadh’s quest to unify Sunni Muslim states against Iran, as evidenced by the outcome of recent dignitary visits, and joint Saudi-Turkish drills. Last December, on the heels of Mohammed bin Salman’s IMAFT announcement, Erdogan traveled to Riyadh where he signed a bilateral agreement establishing a “strategic cooperation council” aimed at deepening military, economic, and investment ties between Turkey and Saudi Arabia. Given Turkey’s sophisticated military industry, it is understandable why Saudi officials may see Turkey as IMAFT’s most influential non-Arab member. Although the extent of Turkey’s commitments to the Saudi-led coalition are unclear, the leadership in Ankara appears fully supportive of IMAFT. Last year Turkey’s then-Prime Minister Ahmet Davutoglu called the IMAFT the “best response to those who are trying to associate terror and Islam,” hailing the coalition as a “step in the right direction.” In February, Saudi Arabia deployed troops to Turkey to carry out joint-drills with the Turkish military and threatened to launch a ground invasion into Syria. In April, King Salman traveled to Ankara and Istanbul, where he attended the thirteenth Organization of Islamic Cooperation (OIC) Summit. Turkey also backed Saudi Arabia’s war against the Houthi rebels in Yemen last year and Ankara officials were quick to side with Riyadh in the Saudi-Iranian spat which followed Sheikh Nimr Baqir al-Nimr’s execution in January.

US Relations with the GCC and Turkey

Although religious and ideological differences previously created tension in the Ankara-Riyadh relationship, shorter-term considerations and geopolitical developments amid a declining US influence in the Middle East are placing Turkey and the kingdom in the same boat for now. The current administration’s push for the Iranian nuclear agreement and Washington’s support of the Syrian-Kurdish dominated Syrian Democratic Forces have caused some damage to US relations with both Riyadh and Ankara. Within this context, the Turkish and Saudi leaders likely view a closer regional strategic partnership as a means of preventing common adversaries and rivals from filling a vacuum left by the relative decline of US influence in the region.

Determined to portray the failed coup plot as the work of self-exiled Turks working under the auspices of foreign governments to deflect attention away from domestic factors which may have prompted the attempted coup, the Turkish president has pointed his finger at US-based Imam Fethullah Gülen. This has created further tensions for US-Turkey relations, with Prime Minister Binali Yildirim saying that the US refusal to extradite the Pennsylvania-based cleric would signal an act of war. Labor Minister Suleyman Soylu went so far as to suggest Washington was involved in the July 15 putsch.

Last week demonstrated Erdogan’s vulnerability to disloyal factions in the Turkish armed forces. Should further domestic unrest and turmoil wreak greater havoc and instability throughout the country, terrorist organizations including ISIS may take advantage of new opportunities to deepen their footprint in Turkey by exploiting turmoil. Although the situation in Turkey remains tense and highly fluid, the risks of further infighting within and between the country’s military and security apparatus raises economic and security stakes for many states across the MENA region, including the GCC members. If Ankara were to become consumed in Turkey’s own internal power struggles between the AKP’s supporters and opponents, Saudi Arabia and Qatar risk becoming increasingly isolated in Syria, and Riyadh could lose a potentially key and valuable partner in the IMAFT.

Giorgio Cafiero is the CEO of Gulf State Analytics (@GulfStateAnalyt)