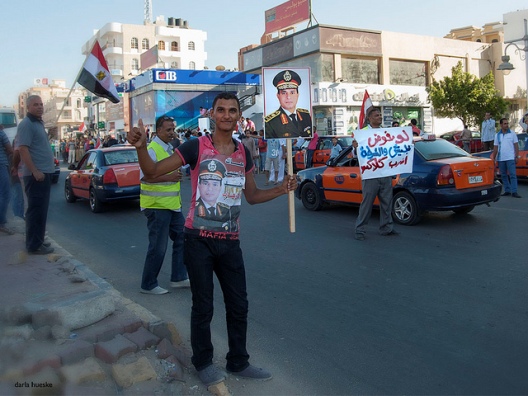 For the first time since his appointment by ousted president Mohamed Morsi as defense minister, General Abdel Fattah al-Sisi spoke to the press, offering a rare interview to Yasser Rizk, editor-in-chief of the daily Al-Masry Al-Youm. The importance of the interview can be seen in the implicit and explicit messages from the strongest man in Egypt, sent to both his supporters and opponents. Of equal importance is its timing. It was published as the country celebrated the 1973 War victory on October 6, a day on which Egypt’s pride in its army is at its highest. It also comes in the midst of increasing calls for the minister of defense to assume the role of Egypt’s next president.

The Image of a National Hero

Al-Sisi is now viewed by most Egyptians as a national hero who saved the country from the Muslim Brotherhood and their despotic president. Several popular campaigns have been launched, calling on al-Sisi to run for president. To them, al-Sisi is the only savior who can bring stability to the country. Yasser Rizk capitalized on the chance offered by the interview to consolidate this image of a hero who can take the helm in Egypt at this critical time.

The image of a national hero was also crystallized during the official October 6 celebrations. While interim president Adly Mansour addressed the nation through a televised speech, al-Sisi spoke to a live audience in the Air Defense Stadium, amid the chants of thousands of Egyptians: “The army and the people are one hand.”

According to Rizk, al-Sisi is an attractive option to the masses, not only because of his calm demeanor and the confidence he exudes with his voice and gestures, but also because of the faith the General himself has in the masses. According to Rizk, al-Sisi has immense respect for the people, always referring to them as ‘great.’ Rizk also underlined the General’s polite conduct, refusing to defame or insult ousted president Mohamed Morsi. The image of the calm and paternal general was juxtaposed with al-Sisi’s portrayal of Morsi. al-Sisi said the former president should be ‘excused’ for not being able to grasp what it takes to run the country.

At the same time, al-Sisi showed a modest reluctance in taking on the role of president. Asked if he would run for president, he did not give a definitive answer, saying only that it was an “inappropriate” time to ask the question, in light of the current challenges the country faces. However, he ended his answer with a verse from the Holy Qur’an which says “God has full control over His affairs.” implying that when God decrees something, He can’t be stopped. This clearly leaves the door open for a decision to run for president. The likelihood of al-Sisi taking this decision is unclear, and with this statement, he has left the door open to all options.

Throughout the interview, al-Sisi constantly drew on the image of a hero standing up to the egoism and failure of the Muslim Brotherhood. He described details of a meeting with leading Brotherhood figures, Saad al-Katatny and Khairat al-Shater that took place in late June. In the meeting al-Shater spoke about the violence that would erupt if Morsi was deposed. Al-Sisi used this opportunity to give a glimpse of his anger, directed of course, at al-Shater: “What do you [the Brotherhood] want? You ruined the country… you want either to rule us or kill us.”

The Egyptian army has long enjoyed a prestigious status among Egyptians. For many years, the army distanced itself from direct involvement in politics and anything related to the army, particularly its economic assets, were kept secret, in accordance with the law. Only news relating to army combat training and exercises, which were meant to consolidate the army’s image, were published in the media.

When the Supreme Council of Armed Forces (SCAF) assumed the responsibility of running the country in 2011, the image of the army as a national institution was tarnished. Military personnel had a direct hand in the killing and injuring of Egyptians in Tahrir Square, Maspero, Mohamed Mahmoud Street, and elsewhere. The military police violently dispersed numerous sit-ins—whether organized by revolutionaries or workers–and activists’ testimony pointed to egregious human rights violations. Virginity tests were carried out on female protesters, and torture was inflicted on detained protesters in the Egyptian museum in Tahrir. Protesters called for the fall of military rule, demanding that SCAF hand power to an elected and civilian government. The army, for many, was no longer a sacred national institution, a myth that the Egyptian state sought to strengthen over time.

In his interview, al-Sisi continues to rebuild the image of the army as a national institution, one that seeks only the best for the country. First, he spoke about the armed forces’ capabilities, allowing it to plan strategically for the country’s future. He offered an anecdote. In April 2010, as chief of military intelligence, he presented a report to the presidency predicting a popular uprising by the spring of 2011. This report, from al-Sisi’s point of view is clear evidence that the armed forces’ practices are based on scientific, accurate methods and also reveals its ability to deal with unexpected situations.

Secondly, he spoke about the values of the army. Values like honesty, loyalty to leadership, and nationalism are the basis for the military institution. Because of these very values, shortly after his appointment as new defense minister, he went to former defense minister Field Marshal Tantway and told him, “Sir, if you want me to quit the position, I will do so immediately.” While he did not intend it that way, the story was an indication of the loyalty the army has within its ranks, not unlike the loyalty within the Brotherhood’s own ranks.

Al-Sisi versus the Brotherhood

Al-Sisi denied that the military institution rejected the idea of Mohamed Morsi as president. On the contrary, he repeatedly said the armed forces wanted to help the president succeed, only to be ignored by Morsi. Highlighting historical disputes between the army and Brotherhood over the July 1952 revolution, he said that the army is loyal to the country, while the Brotherhood’s ultimate loyalty is to the group itself, and its ideas of the Caliphate and Ummah. Al-Sisi used the October 6 celebration last year as evidence. Rather than invite the real heroes of the 1973 war, Morsi instead invited Tarek al-Zomor, who spent 30 years in prison for the assassination of Anwar al-Sadat.

Al-Sisi stressed that, from the very beginning, Morsi did not want to escape the Muslim Brotherhood’s restrictions, domination, and authority. He said that the Muslim Brotherhood, and Islamists in general, have closed systems of values and ideas that conflict with the idea of the state, and that they wanted to enforce their vision on the state.

The Army Enforced the People’s Will

Turning his attention to June 30, he spoke of the unprecedented numbers that took to the streets in order to regain control of their country. The image of the national savior is again drawn on here. According to al-Sisi, the military institution was driven by a desire to achieve the will of the people, at the lowest possible cost. He said the military’s own interests were not at play, and that they sought only to protect the people and enforce their will. It is hard to imagine what “lowest cost’ means to al-Sisi’s with hundreds killed, thousands injured, and rampant chaos and violence destabilizing  the flow of everyday life in society. The civil war he said the army intervened to prevent is more likely to start more than ever.

In a meeting with military personnel that was leaked by pro-Brotherhood outlet Rassd, Sisi mentioned that all the red lines, not only those concerning the armed forces, have been crossed. According to him, the revolution created new variables and realities that the armed forces now has to deal with. Based on that exchange, it would appear the military is trying to find a strategy to control and contain any possible threats posed to them by these new realities. This can be seen, for instance, in the efforts of the military representatives in the Constituent Assembly to maintain the military’s privileged status the Muslim Brotherhood’s constitution gave to them in 2012.

One main goal of the revolution was the genuine enforcement of the rule of law. Without addressing this goal, the country will never find the stability it seeks. The Muslim Brotherhood, like the army committed many mistakes, and had a hand in the killing of protesters. The army has been able to capitalize on those mistakes to restore its reputation, tarnished by those same mistakes. As hundreds were killed during the dispersals of the pro-Morsi Raba’a al-Adaweya and al-Nahda sit-ins, many Egyptians are happy to see their “enemy” killed. However, this ultra-nationalistic sentiment and support for the army, and state security’s, violence practices will not bring peace or reconciliation to the country. It will lead only to more blood and chaos. Stability will exist only when murderers of Egyptians in Tahrir, in front of Maspero, in Mohamed Mahmoud street, in the Port Said Stadium, in front of the Brotherhood headquarter, in front of the Ittahdiya Palace, in Raba’a al-Adaweya and al-Nahda, are brought to justice.

Mohamed Elgohari is an Egyptian academic with varied experience on Arab and Middle Eastern Affairs. He is a recipient of the prestigious Ford Foundation International Fellowship, which provided him with a full scholarship to complete his MA at New York University in Comparative Politics. He worked as a researcher in Cairo for a number of academic institutions. His articles have been published in outlets including Jadaliyya, World Politics Magazine, and World Press. He is currently an intern at the Atlantic Council’s Rafik Hariri Center for the Middle East and a regular contributor to EgyptSource.
North Africa