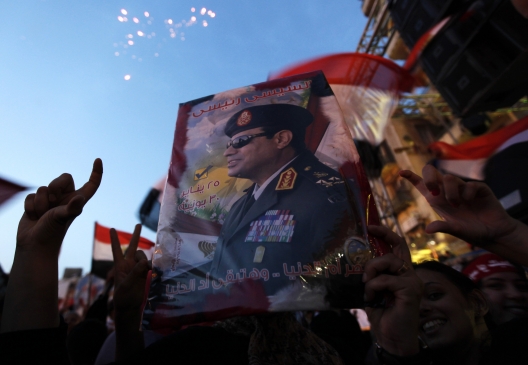 With the election of former army chief, Abdel Fattah al-Sisi as Egypt’s eighth president, Saudi Arabia, the United Arab Emirates and Kuwait are likely to continue to provide substantial economic support for Egypt. In the aftermath of the elections, news reports indicate large aid packages are under discussion. The Gulf may add up to another $20 billion in assistance to the estimated $20 billion already provided since the military seized power last July. While the numbers are large, the burn rate of the funds has been high, with most going to support government expenditure on subsidies and to simply keep the government and the financial system afloat. This was an adequate outcome for the Gulf donors in their first year of aid, but it won’t be in the second or third. With the return of “stability” to Egypt, Gulf donors now expect that Egypt will make some of the hard decisions necessary to return the economy to a sustainable growth trajectory.

My colleague Mohsin Khan recently outlined the three major economic problem sets that Egypt will need to confront quickly: increasing energy supply, stabilizing public finances, and attracting external financing.  Gulf friends of Egypt will play an important role by supplying discounted fuel and by being a major source of external financial support.  But they can and should do more if they want to help set Egypt on a course that will result in level of private investment high enough to support substantial growth.  What are the other steps Gulf donors should take?

First, they can influence stabilization of Egypt’s public finances by helping authorities reduce the subsidies that are draining public coffers at an alarming rate. As I suggested before, Gulf donors should enter a consultation with the IMF and the Egyptian government to outline the parameters of an economic reform program. Their aid could then be designed to provide the safety net necessary for the Egyptian government to pursue such a program, without damaging the economically most vulnerable segments of the population. In tandem, the Gulf partners should encourage the Egyptian government to get off the fence and actually negotiate an IMF program, which would add significantly to sources of external financing and help provide confidence to both domestic and foreign investors.

Second, Gulf donors should not pour more money into welfare projects managed by the Egyptian military.  A prime example of this is UAE support for a massive housing project in partnership with the Egyptian military. In the period of uncertainty after the military takeover, UAE officials justified working through the military because they viewed it as the only partner able to act efficiently. Even with civilian government restored, the temptation will be to continue this “efficient” relationship. It would be a bad idea for several reasons: 1) the Egyptian military, although involved in many economic sectors, has no record of being a dynamic economic development agent, just the opposite in fact; 2) the prospects for corruption involving current and retired military officers will grow, reducing confidence in the military and its Gulf friends; and 3) Egypt has a capable private sector that will need to be the engine of any sustainable economic growth. Gulf partners should not only not favor the military, they should actively encourage Egypt’s generals to get out of economic activities where the private sector has an advantage, and encourage transparent economic rules of the road that apply to all participants.

Third, Gulf donors should work to reduce the xenophobic nationalistic neurosis that has gripped Egypt over the last year.  It would be too big an ask to expect Gulf states to support a path back to genuine democracy, but their interests as well as Egypt’s economic interests would be enhanced by helping Egypt restore more normal ties to its traditional sources of external investment in the United States and Europe. Gulf and Western interests in Egypt are largely identical – in particular, helping Egypt succeed economically so it doesn’t become a source of greater regional instability. While some have bandied about the notion of a new massive Marshall Plan for Egypt, that isn’t going to happen and should not. The donors conference proposed by King Abdullah in his congratulatory message to Sisi should be used to coordinate current aid efforts, but the focus should be on creating the conditions for inflows of private capital, both from Egyptians who have been parking capital outside the country and from foreign investors who have been holding off pending better political conditions. There is no shortage of private investment money ready to go into Egypt once the signals and incentives are right. For that to happen, the Gulf will have to exert leadership commensurate with its economic role.  While their generous assistance at a time when Egypt badly needed it does not guarantee policy influence, Gulf states have an opportunity now that they should not waste – they can use their economic and political support to help Egypt restore itself as a regional power that looks to the world with confidence, putting aside the fear and loathing of the last year.

Richard LeBaron is a resident senior fellow with the Rafik Hariri Center for the Middle East and the Brent Scowcroft Center for Security with a special focus on the Gulf region.