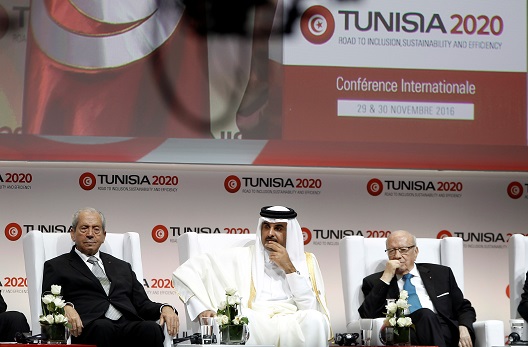 Qatar is one of Tunisia’s most important trade partners. It has invested, loaned, or assisted Tunisia with more than 1.5 billion USD since 2011, and has directed its media, think-tanks, and PR empire to acclaim the country’s transition to democracy. Thousands of Tunisians work in Qatar, and the current Gulf crisis has allowed a number of Tunisian businessmen to profit from the besieged peninsula by exporting industrial products, and even establishing factories there.

Saudi Arabia (KSA) and the United Arab Emirates (UAE) have instead taken a hostile position since the fall of dictator Zine El-Abidine Ben Ali. First, KSA offered him refuge. Then, KSA and the Emirates put pressure on Tunisia, either to protect elements of the Ben Ali regime, or to tame down Political Islam, such as trying to get the former Minister of Interior released, or simply to discredit the popular uprising and avoid its contagion.

But since the Gulf crisis began in June, Tunisia has refused to take sides. It has, however, taken a number of actions than can be seen as countering Qatar. Is Tunisia moving towards the opposite axis of KSA and the UAE, or just recalibrating its foreign policy?

Qatar’s regional stimulus has decreased since 2013, and the siege imposed by the so-called ‘Boycott Quartet’—Bahrain, KSA, Egypt, and the UAE—seems to endure. This has led many in Tunis to question the sustainability of their country’s relationship with Qatar. At the same time, the Saudis and the Emiratis have hinted at investment in Tunisia; an investment conditional, though, on the tacit request that Tunis steers away from the Qatari orbit.

Saudi Arabia and the Emirates, moreover, have secured the support of the Trump (although some of his administration are more leery of getting involved in the Gulf’s feuds). They are also courting Europeans—specifically France—and gaining ground in Libya. For Tunis, ties with France and the United States are historic and primordial, and good relations with anyone who controls Libya are a necessity. The positions of the United States, France, and the developments in Libya may lead Tunisian policymakers to rethink their own policies.

In Tunisian public opinion, support to Qatar is strong among the constituencies of the Ennahda party and many of the revolutionary movements. Due to Qatar’s early backing of the Tunisian revolution, however, supporters of Ben Ali and the past regime oppose Qatar and have been gaining ground in Tunisia since 2013. Tunisia’s leftist and pan-Arabist groups are also openly opposed to Qatar, because of its support for political Islam and its suspected ties with terrorist groups. Former-regime affiliates, leftists, and pan-Arabists are predominant in the bureaucracy, police, and media. Hence, they are very influential and currently more vocal and active than the Islamists or the revolutionaries. There is, therefore, a strong sense of resentment against Qatar in the Tunisian street these days, which may legitimize any distancing from Qatar.

Relations, in international relations, are never linear. Thus, while the general politics of the Saudi-Emirati axis was to oppose Muslim Brotherhood-inspired political Islam, Ennahda leaders were able to open channels of communication with the Saudi leadership. Ennahda’s president, Rached Ghannouchi, and other leaders frequently visited the Wahhabi Kingdom, usually under the pretext of Hajj or Umra, securing an entente between Saudi and Tunisia.

The advent of King Salman in January 2015 has opened new horizons; Ennahda’s leadership has good ties with Salman’s court. The Saudi foreign minister visited Tunis in December 2015, for the first time since September 2011, and Saudi Arabia pledged billions of US dollars in investments during the “Tunisia 2020” investment conference of November 2016. Some Ennahda leaders also maintained links in the UAE, often using its liberal financial platforms.

Nidaa Tounes, Ennahda’s partner in government since 2015, was considered an Emirati favorite. The consensus that established the Nidaa Tounes-Ennahda coalition government was supposed—among other things—to decrease Emirati hostility, with Nidaa Tounes restoring Tunisia’s ties with the UAE, and conserve Qatari support, that would be managed by Ennahda. Abdullah Bin Zayed, UAE’s foreign minister, visited Tunis in March 2015, his first state visit since May 2011.

Nonetheless, the relationship between the two countries kept degrading. Nidaa Tounes’ gradual implosion has weakened its founder, President Beji Caid Essebsi, who was left governing without a functioning political party to back him up. It also made Ennahda the strongest group in government. For the UAE, it meant a continuation of the pre-2014 Ennahda rule, and it signaled unchecked Qatari influence in the country. In Saudi Arabia, on the other hand, things are changing fast with the ascent of Mohamed bin Salman, whose foreign policy line seems close to Abu Dhabi.

In June, a leaked paper attributed to Emirates Policy Center (EPC)—a think tank close to Abu Dhabi’s ruling elite—enunciated a strategy for the UAE in Tunisia. EPC did not recognize the document, but it also did not deny publishing it. The paper names a number of Tunisian politicians who could potentially serve the UAE in Tunisia, and advocates for undermining Qatari interests in the country. It also calls for a sustained public relations campaign targeting Islamists, and a support to social movements opposed to them.

Several Saudi and Emirati envoys visited Tunis during the summer. The UAE has sent two envoys in June. In July, the Saudi minister of trade visited Tunisia with a 50-strong delegation. He pledged $200 million in investments. In October, the Saudi ambassador met with Tunisia’s recently appointed interior minister to talk about security cooperation. A few days later, King Salman’s son Sultan, minister and chairman of the Saudi Commission for Tourism and National Heritage, was in Tunis to sign conventions and meet with officials.

The Saudi-Emirati axis is trying to move Tunisia away from Qatar. Several indicators signal that the offensive has started to work.

In May 2017, the Tunisian government started a “war on corruption.” Among those apprehended, many were involved in cross-border trafficking with western Libya, a region under heavy Qatari (and Turkish) influence. The most important figure detained during the current campaign, Chafik Jarraya, is considered a protégé of Qatar.

Some sources hinted that his arrest was linked to an arms shipment that the Qataris planned to pass through Tunisia to armed groups in western Libya. According to these sources, it was the Egyptian intelligence, possibly helped by the French, that intercepted the deal and informed their Tunisian counterparts.

In June, the spokesperson of the self-proclaimed Libyan National Army (in eastern Libya, close to the UAE), Ahmed Mismari, accused Qatar of funding Libyan terrorists through Tunisian banks. His comments were an opportunity for the Tunisian government to start an unprecedented scrutiny on NGOs receiving foreign funding, especially those linked to Qatar.

While Ennahda adopted Tunisia’s position of neutrality in the Gulf crisis, one of its leaders, Rafik Abdessalam, former foreign minister of Tunisia (2012-13) and son-in-law of Rached Ghannouchi, publicly defended Qatar and criticized Saudi Arabia and the UAE. In October, Abdessalam was indicted by the public prosecutor. The case dates back to 2013 and has been continuously postponed until now (but Abdessalam remains free). It was described as politically motivated. Moreover, during the summer, several disagreements occurred between President Caid Essebsi and Ennahda’s Ghannouchi.

And threats to democracy

The 2013 agreement between Caid Essebsi and Ghannouchi, which paved the way for their two parties’ alliance after the 2014 elections, responded to local calls, but also to international considerations, including pressures from Qatar. While the local context still requires the two elderly men to work together, the international context has changed. The agreement is therefore less solid than it was three years ago.

It is possible that Tunisia is simply decreasing its dependency to Qatar in order to diversify its foreign partners. But the signals enumerated above may also signal that Tunis is changing its foreign policy course.

Due to the important economic ties linking Tunis to Doha, and the popularity of Qatar among an important segment of the Tunisian population, the Tunisian leadership should beware of siding with KSA and the UAE during the current crisis. This may impact the fragile social cohesion and send the country back to its 2012-13 polarization. Qatar remains, moreover, an important economic player, and its difficult geopolitical situation limits its political interferences.

Furthermore, Riyadh and Abu Dhabi’s goals in the region prioritize stability over democracy, often championing authoritarian figures such as Egypt’s Abdel Fattah al-Sisi or Libya’s Khalifa Haftar. In Tunisia, this would translate into empowering the country’s establishment and strengthening the Ministry of Interior, which formed the backbone of the pre-2011 police state, consequently sabotaging the only democratic success of the Arab Spring.