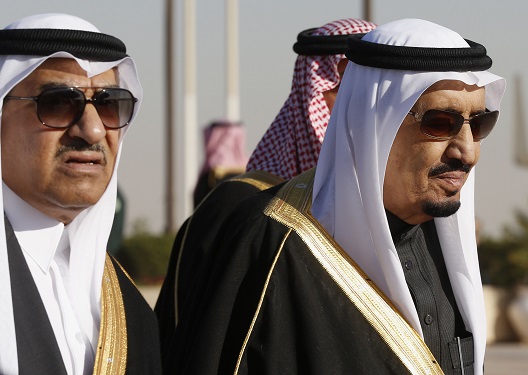 When President Barack Obama welcomes leaders of the six-nation Gulf Cooperation Council to Camp David later this week for the rare honor of a two-day gathering at the presidential retreat, he will be hosting representatives of an unusual collection of hereditary monarchies. They are conspicuous relics of bygone eras, distinguished mainly by their shared lack of respect for freedom of expression and other basic human rights—for women, for the many thousands of migrant workers that enable these countries to function, for their secular and liberal-minded citizens, and for Shia Muslims and other religious minorities. These leaders share none of the political values or democratic legitimacy—or prospects for long-term stability—that define the United States and its government. Time and again, GCC governments treat peaceful dissent as treason and terrorism, thus alienating growing swaths of their people and exacerbating internal and regional tensions. This policy exacerbates some of the security challenges—yet these enduring barriers to stability appear not to be on the agenda, according to leaks from Administration officials to the media.

The Sheiks of the United Arab Emirates, the Sultan of Oman, the Kings of Bahrain and Saudi Arabia, and the Emirs of Kuwait and Qatar all preside over fragile, heavily armed political systems, whose economies, societies, and public health are warped by outsized unearned income from the oil beneath their sand. Each is determined to suppress political competition, independent journalism, and civil society; all ban political parties, imprison peaceful dissidents, and bar entry to human rights officials from the United Nations and respected private groups.

Accordingly, Freedom House has rated as “Not Free” in its current assessment of the state of freedom the world every one of these monarchies—all save Kuwait, which is a half-notch ahead at “partly free” (it boasts the only national legislature in the region that really matters, though its scores, too, have declined recently due to mounting restrictions on independent media and the imprisonment of dissenters for things like “insulting the emir”).

The Gulf governments do not even pretend to be democratic or democratizing. At the Atlantic Council on May 6, UAE Ambassador to Washington Yousef Al Otaiba, in making the point that his country had joined with the United States in several military campaigns in recent years, declared, “We still don’t share your democratic values—but we are great partners. ”

Obama also knows who he will be meeting this week, as he made clear in a recent interview with Tom Friedman of the NY Times. He noted that a more fundamental challenge for these states than the military threat from Iran, is

how can we strengthen the body politic in these countries, so that Sunni youth feel that they’ve got something other than [the Islamic State, or ISIS] to choose from. … I think the biggest threats that they face may not be coming from Iran invading. It’s going to be from dissatisfaction inside their own countries. …

This of course echoes the prescient statement by then-Secretary of State Hillary Rodham Clinton in Qatar in January 2011, on the eve of the Arab uprisings that have swept the region, when she famously noted, “The region’s foundations are sinking into the sand.” She went on to say:

Those who cling to the status quo may be able to hold back the full impact of their countries’ problems for a little while, but not forever. If leaders don’t offer a positive vision and give young people meaningful ways to contribute, others will fill the vacuum. Extremist elements, terrorist groups, and others who would prey on desperation and poverty are already out there, appealing for allegiance and competing for influence.

That is exactly what has happened. The failure to open political systems and to expand economic opportunity across the region has fed the ranks of the ISIS terrorist juggernaut.

What has not happened (yet) is for the United States to use its leverage with these monarchies to press upon them the need for real reform, even though Clinton said then that “[T]his is a critical moment, and this is a test of leadership for all of us.” Obama said more recently to the New York Times, “That’s a tough conversation to have, but it’s one that we have to have.”

Has the time come for this ‘tough conversation’? Will this week’s discussion of a heightened US commitment to the short-term security of these repressive regimes come with a serious discussion of the need for the reform that is necessary for long-term stability of ‘the body politic in these countries’? What will be asked of the Gulf countries, in return for additional military supplies and guarantees they are seeking this week?

During the once promising Arab Spring uprisings of 2011, many Gulf states used their petrodollars to buy off their populations with social benefits. Those who would not be swayed were thrown in prison, tortured, or worse. In a clear reference to Bahrain, President Obama said in May 2011, “The only way forward is for the government and opposition to engage in a dialogue and you can’t have a real dialogue when parts of the peaceful opposition are in jail.”Yet as the price of oil slips and alternative energy sources capture a growing share of the global market, repressive oil-rich countries will have less room to maneuver to quiet the growing disaffected youth bulge. The United States will also have ask how “great” a partner such states would make when they insist on contributing to as much of the instability that they claim they want to solve.

One hopes that in the course of this week’s summit, President Obama and his senior diplomatic team will have an opportunity to urge upon these Gulf partners an appreciation for the advantages that would accrue to them—the stability that would be enhanced—if they were to find a way to direct their wealth and political position toward more sustainable political systems in which the rights and fundamental freedoms guaranteed in the Universal Declaration of Human Rights were truly respected.

Thomas O. Melia is Executive Director of Democracy International and was Deputy Assistant Secretary of State from 2010 to 2015.