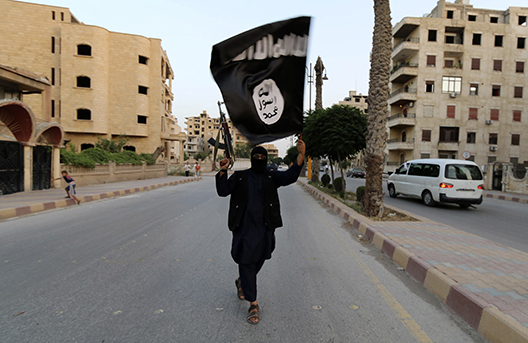 Photo: A member loyal to the Islamic State in Iraq and al-Sham (ISIS) waves an ISIS flag in Raqqa June 29, 2014. (Reuters)

As the Arab world and Muslim communities worldwide react in horror to a suicide attack in Medina on the last eve of Ramadan—capping a violent few days that has taken close to 300 lives in Iraq, Turkey, and the Gulf kingdom—the world once again asks: what is this vigilante scourge that persists in engaging in wanton violence in the name of Islam? How to describe precisely what it is in words, particularly against the backdrop of Donald Trump’s previous demand that Hilary Clinton calls it ‘radical Islam’ – and how to explain its attractiveness?

There are two obvious schools of thought in international discussions on the ‘root cause’ of this kind of extremism. The first is that the most critical, most vital factor for the motivating of extremists is ideological – and that political, sociological, and economic factors are secondary, excuses, or immaterial. The second school of thought is the mirror image of the first – that ideology is unimportant, while ‘on the ground factors’ pertaining to social circumstances override all.

The binary choice between the two analytical frames is false, as there is no one radicalization process. Different individuals go through very different journeys of extremism – and there is no one model that explains them all. The reasons why a Malay Muslim from an affluent background in the north of Malaysia might decide to join ISIS are very different than those of a Syrian Muslim from Aleppo who has seen his community destroyed by the butchery of the ruling regime, and that differs from why a Belgian convert might decide to travel to Syria to fight in the same organization. For some, ideology may be an excuse or secondary, while for others, it might be a critical factor, without which they might never have engaged in any sort of extremism. The absolutist insistence that it must always be about politics, or always about religious ideology doesn’t account for the practical reality that the journeys different individuals take will depend on a variety of factors. All too often, however, ideology is unduly focused upon and thus overrated in international discussions – which makes it difficult to actually focus on ideology in any meaningful manner.

We must nevertheless consider what the ideology is based on when ideology does play a role – whether in terms of actual & imperative motivation, or as post-facto justification. If the ideology didn’t exist in Syria, for example, then all violent opposition to Assad’s regime would manifest itself in the more centrist elements of the Free Syrian Army. That isn’t the case – a minority have gone the route of ISIS or al-Qa’eda.

The ideological basis is often described as essentially Islamic – which is as ridiculous as it is nonsensical. If that were the case, then there would be far more than a tiny minority of Muslims engaged in it. Numerous religious authorities from all strands of Islamic tradition have repeatedly condemned ISIS– so on the level of the generality of Muslims, as well as their religious authorities, it’s absurd to insist that it is essentially Islamic.

At the same time, it is hardly sufficient to say that this ideology has nothing to do with Islam. Of course, there is a relationship – but the critical question is what that relationship is. The relationship is one of rejection – rejection of Islam’s normative mainstream, and it is precisely because of that rejection of those systems of religious authority and intellectual chains of transmission (described in more depth here) that the likes of ISIS are able, in a warped & radical fashion, to justify their acts of wanton violence.

The Role of ‘Wahabism’ and Purist Salafism

The question then becomes – what is that neo-religious approach, which informs the extremist ideology underpinning ISIS, al-Qa’eda, and their bedfellows? The oft-used easy answer is that ‘Wahabism’ is responsible for the reprehensible reinterpretation of Islamic doctrine that allows for extremist movements. That answer is far closer to being accurate than the trope of ‘Islam is the cause,’ but is still insufficient.

‘Wahabism’ is a (usually pejorative) term given to a certain school of ‘Salafism’. The movement of 18th century purist Muhammad bin Abdul Wahab called itself ‘Salafi’ in that it claimed to ascribe itself to the ‘Salaf’ – i.e., the first generations of Muslims. Mainstream Sunni religious authorities of the age and those that followed gave it the name of ‘Wahabism’ for two reasons – one, to reject the notion that the ‘Wahabis’ followed the Salaf, as though the rest of Sunni Muslims did not. On the contrary, Sunni principles, whether in law, doctrine or spirituality, is predicated on following the ‘Salaf’, through complex and elaborate systems of textual and oral transmission, that are meant to verify each generation of authority back to the Salaf and the Prophet himself. Secondly, the name ‘Wahabi’ was purposely meant to ascribe the movement to Ibn Abdul Wahab – i.e., to signify it as different and distinct from the mainstream. Indeed, other names given to the movement’s followers through history included ‘mubtadi’i’ (blameworthy innovator), with some even describing ‘Wahabis’ as ‘ghuluw’(extremist).

One might describe the movement as ‘purist Salafi’, as adherents to ibn Abdul Wahab’s message consider themselves as ‘Salafi’, adding the prefix of ‘purist’ to distinguish it from the Salafism of the ‘modernists’ or ‘reformists’, such as the Egyptian Muhammad Abduh and others. Among the inheritors of modernist or reformist Salafism include the mainstream of the Muslim Brotherhood and other political Islamist movements.

Yet, again, it is too easy to declare that ISIS and other extremist groups are merely the inevitable outcome of purist Salafism/Wahabism. If that were the case, the religious establishment of Saudi Arabia and Qatar, the two states of the Muslim world that officially adhere to purist Salafism, would look remarkably like the areas of Syria and Iraq under ISIS control. They do not – even though there are magnificent problems around tolerance and fundamental rights. When we describe ISIS’ ideology as Wahabism or purist Salafism, we incorrectly associate millions of Saudis and others with violence. The situation remains far more nuanced, and it is poor analysis to simplistically equate the two.

At the same time, it is also too easy to deny any relationship with purist Salafism – and it is not as tenuous as many in the Saudi kingdom, different sectors of which have aggressively promoted purist Salafism worldwide (such as in Kosova), would have the rest of the world believe. When the intellectual development of ISIS’ ideology is examined, it is impossible to trace it without going through purist Salafism. It may not be the school of purist Salafism; it may not be equivalent to purist Salafism – but it is certainly a rendering of purist Salafism. Muslim religious authorities have pointed this out for many years, and it is increasingly becoming prominent as a religious discourse among Western religious figures like Hamza Yusuf, which may lead to it being noticed more by the Beltway establishment.

Pre-modern Sunni Muslim scholastic authorities denounced the original movement of Ibn Abdul Wahab as heterodox, particularly due to its takfiri tendency to excommunicate Muslims. Today, ISIS and its cohorts are often described by mainstream Muslim religious authorities as khawarij – i.e., akin to an early group of Muslims who were so zealous in a pseudo-piety, it pushed them to fight others who disagreed with them. They were also called ghuluw, or ‘extremist’ – who were considered to have engaged in the ultimate forms of ‘bida’’(blameworthy, or deviant innovation), and thus been mubtadi’.

A New and Modernist Take on ‘Wahabism’

What distinguishes this modern phenomenon is a marriage between a particularly intense inheritance of purist Salafism on the one hand, (or what prominent religious figures like American Muslim scholar Hamza Yusuf describe as ‘takfiri’) and an extremist form of modernist Salafism, or Islamism, on the other. Or as analyst Hassan Hassan refers to it, a ‘hybrid’ of the two. Without that aspect of combination, the phenomenon is not the same – ibn Abdul Wahab’s vision justified rebellion against the Ottoman caliphate, for example, in part because he didn’t push for a globalising caliphate, unlike the likes of ISIS and al-Qa’eda.

In terms of Islamism, nevertheless, it is direly important to note that it has a number of different approaches, and ‘many faces’. Islamism may be a useful term, if only because it ensures there is a differentiation between Islam as a religion, and Islamism as a modern political ideology. Objections to using it at all are dubious, considering that at least in Arabic, Islamists use the term themselves. At the same time, it remains important to ensure there is an awareness of the diversity in Islamism – it can range from ISIS to Tunisia’s Ennahdha to the Muslim Brotherhood in Egypt—all different from each other – and the vast majority of them are not terrorist in nature.

In global discussions, it is insufficient to describe the ideological phenomenon underpinning simply as ‘Islamism’ or ‘Salafism,’ or even just a combination of the two. With all that in mind, it may be that the most realistic and accurate term would be ‘Extremist Islamism’ – hopefully making it clear that ISIS and al-Qa’eda represent a minority of Islamists themselves. Others may describe the same trend as ‘jihadi-Salafi’ – but while there are good reasons for doing so, the efficacy of using the two terms is problematic, which do not exist with ‘extremist Islamism’.

At the same time, in seeking nuance, we must not be blind to the existing challenges emanating from within most forms of Islamism and purist Salafism. Neither automatically result in ISIS – but there are still issues to be addressed.

In addressing all those challenges, the calls for ‘Islamic reformation’ are sorely misplaced, when one realizes that both types of Salafism, whether modernist or purist, are in themselves ‘Islamic reformation’ enterprises. The breakdown of religious authority is precisely what allowed for the likes of ISIS to emerge in the first place – and encouraging further fragmentation in that regard does carry its risks.

The scourge of the likes of ISIS and al-Qa’eda will remain with us for some time to come – and to properly defeat it, we must all be clear about precisely who the enemy is. Making enemies out of all Muslims, particularly when they suffer the most from ISIS, quantitatively as well as qualitatively, is hardly useful. Nor should nuance be abjured for simply political point scoring, as we’ve seen in so much of the Republican discussion on this issue – but nor should nuance be abused to let questionable policies of certain states and their establishments off the hook. We’ve spent enough time doing that – and continuing that type of approach is simply doing the same again and again, while expecting different results. There’s a word for that. Insanity.

Dr H.A. Hellyer is senior nonresident fellow at the Atlantic Council’s Rafik Hariri Centre for the Middle East and the Royal United Services Institute. The author of ‘A Revolution Undone: Egypt’s Road Beyond Revolt’ (due to be published by Oxford University Press later in 2016), he’s researched Islamic thought in Egypt, Malaysia, South Africa and the United Kingdom. www.hahellyer.com