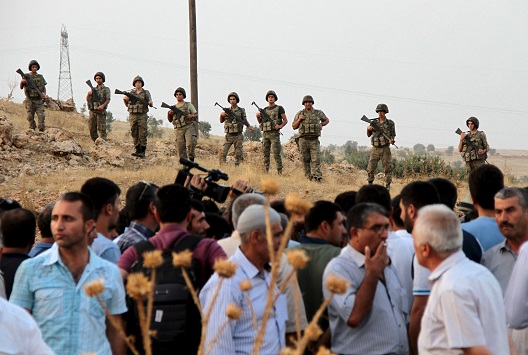 Members of the Kurdistan Workers’ Party (PKK) killed two police officers in Urfa on July 22, purportedly in retaliation for an Islamic State (ISIS or ISIL) inspired suicide bombing of a leftist meeting in the border town of Suruç. In response, Turkey struck PKK bases in Iraqi Kurdistan and southeastern Turkey. This prompted a sharp increase in PKK-Turkish state violence, which has resulted in at least 113 Turkish security personnel deaths and hundreds of PKK fighters killed since July 20. The conflict has escalated in the past week, with the PKK killing thirty-nine Turkish soldiers and police and Ankara sanctioning a cross-border raid into Iraqi Kurdistan.

This violence marks the end of a two-year ceasefire between the PKK and Turkey, prompting both sides to use violence to force the other to return to peace talks. The PKK says it will return to the talks only after the government meets its demands to formalize the negotiations, including political autonomy inside Turkey and freedom for the group’s imprisoned leader, Abdullah Öcalan. Ankara has said that it will continue striking PKK targets until the group withdraws from Turkish territory.

These events resemble PKK-Turkish clashes between 2009 and 2012, when the breakdown of peace talks resulted in at least 920 casualties, according to the International Crisis Group. However, the spillover from the Syrian conflict has altered the political dynamics that previously pushed the two parties to begin peace negotiations.

This change prompted the Justice and Development Party’s (AKP) de-facto leader, President Recep Tayyip Erdoğan, to abandon his previous embrace of the peace process. Similarly, the Kurdish grassroots enthusiasm for the PKK and its Syrian sister party, the Democratic Union Party (PYD), has resulted in bottom-up pressure on Turkey’s Kurdish-majority Peoples’ Democratic Party (HDP) to advocate for pan-Kurdish solidarity.

By contrast, in 2012, both the AKP and the HDP had a mutual interest in supporting the peace talks. Both sides supported the drafting of a new constitution, which gave way to a natural compromise: In exchange for HDP support for a new constitution that included a transition to an executive presidency, the AKP would include language that would grant some semblance of political autonomy to municipalities. This policy would result in de-facto autonomy for Turkey’s Kurdish-majority areas.

This framework for unofficial negotiations, however, became a political liability for the HDP during the June 2015 election campaign. It prompted the party’s co-chair Selahattin Demirtaş to dismiss claims of HDP-AKP collusion, saying that his party would not support the creation of an executive presidential system in March 2015.

The party eventually adopted a three-pronged electoral platform, wherein Demirtaş sought to convince a small segment of liberal ethnic Turkish voters to support the party to help the HDP surpass Turkey’s 10 percent election threshold. To do so, the party attacked Erdoğan, taking advantage of growing dissatisfaction over his perceived authoritarianism. The HDP also took aim at Turkey’s foreign policy, going so far as to accuse the AKP of supporting ISIS.

The accusations were not simple rhetoric, but rather based on events inside Syria. In 2013, Turkey allegedly supported the Salafi Ahrar al-Sham and the al-Qaeda linked Nusra Front during a battle for the then Kurdish controlled Tal Abyad. The town eventually fell to these two forces, prompting many Kurds to flee the area. Shortly thereafter, many of the groups involved in this battle defected to ISIS. For many Kurds, the distinction between Nusra and ISIS is irrelevant, given that the same units were involved in fighting the YPG (the PYD militia in Syria).

The issue grew in prominence in June 2014, after ISIS took control of Mosul and quickly advanced towards the Sinjar area in Iraq’s Nineveh province. The offensive intended to eradicate the area’s Yazidi population, an ethnically Kurdish group that practices an ancient religion blending Zoroastrianism and elements of other monotheistic faiths. While some Yazidis reject the Kurdish label, concerns about genocide resulted in an outpouring of support from ethnic Kurds in Turkey.

It also prompted more forceful intervention from the YPG in Syria and PKK units in Iraq’s Makhmour district. The YPG, backed by US air power, eventually succeeded in carving out a corridor to the PYD-controlled canton of Jazira in Syria, which then allowed the evacuation of a large numbers of Yazidis. The PKK also took part in the operation, battling ISIS at the base of Mt. Sinjar.

The YPG soon came under heavy assault from ISIS in Kobani. The YPG eventually turned the tide against ISIS, after it had lost all but a sliver of territory inside the Syrian city. In Turkey, many Kurdish refugees who had fled the fighting took shelter with family or in refugee camps operated by the HDP’s sister party, the DBP. These camps operate outside of the bounds of centralized state authority and rely on private donations from Kurdish NGOs and business people for financing.

Inside these camps, Kurds who self-identify as PKK provided security. This phenomenon suggested a much broader PKK-led effort to take advantage of the ceasefire to entrench itself in Kurdish-run cities in Turkey’s southeast. Turkey, wary of upsetting the peace process, apparently acquiesced to these events before the recent decision to use airstrikes and arrests to force a change to PKK policy.

Turkey’s reversion to coercive tactics prompted a backlash in many Kurdish-majority cities. Since July 20, at least fifteen Kurdish-run districts have declared autonomy, resulting in the arrest of at least six elected DBP/HDP co-mayors for violating Turkey’s constitution. In many of the self-declared autonomous towns, the PKK’s youth wing has dug trenches and erected barricades to prevent Turkish police vehicles from entering the city. In certain instances, the police have retreated to positions outside the city, entering the town only at night in armored vehicles to conduct mass arrests. The PKK, in turn, attacks these convoys with improvised explosive devices, automatic weapons, or rocket propelled grenades.

In the past, Ankara relied on Öcalan to ease tensions. As recently as January 2015, Öcalan helped end a similar standoff in the city of Cizre. During these more recent clashes, however, Öcalan has not been allowed to speak publicly, even after AKP-sympathetic media suggested he would call for calm on September 1. In the near future, Ankara may turn to the military to clear PKK fighters from city centers. Such an operation would certainly result in a large number of casualties, which the PKK would certainly use as a pretext to continue attacking Turkish security personnel.

Absent a call from Öcalan to withdraw, the prevailing political and security situation is unlikely to change, suggesting continued violence between the PKK and the Turkish State in the near term. However, the political implications of this latest round of fighting may be longer lasting, owing to the events in neighboring Syria and Iraq. As a close US partner in Syria, the PYD’s political vision in any post-Bashar al-Assad peace arrangement would have an audience with the world’s strongest power. This strategic edge also provides the PYD with incentive to refrain from attacking Turkey, which may explain why Ankara has not targeted the group inside Syria with airstrikes.

For many Turkish Kurds, however, the PYD’s operations inside Syria will continue to bolster the appeal of the PKK, placing Ankara in a difficult position politically (despite the seeming adoption of two distinct policies towards the PKK and PYD). The HDP will also have to contend with raised Kurdish expectations for political autonomy, especially if the PYD succeeds in gaining such status in a post-Assad Syria. The growing appeal of Kurdish military actors could also force the party to take a more hostile approach toward the Turkish state. While politically beneficial in the short term, this stance could undermine the HDP’s credibility in the longer term with segments of the electorate that had voted for the party for its liberal bona fides.

These conflicting political priorities are certain to complicate the eventual return to the negotiating process. Moreover, it suggests that the conflict has evolved from previous incarnations, owing to the spillover of the Syrian civil conflict.

Image: Turkish soldiers block a road to stop a convoy, carrying a delegation of the pro-Kurdish Peoples' Democratic Party (HDP), near the southeastern town of of Idil, Turkey, September 9, 2015. (Reuters)