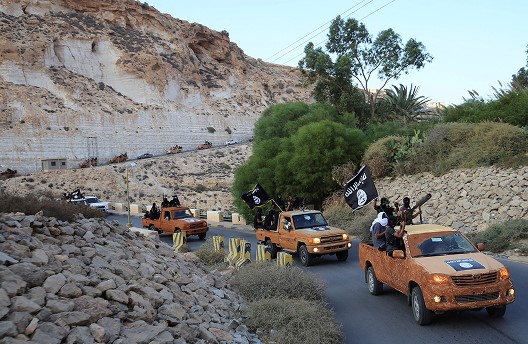 An armed motorcade belonging to members of Derna's Islamic Youth Council, consisting of former members of militias from the town of Derna, drive along a road in Derna, eastern Libya October 3, 2014. (Photo: Reuters)

The Islamic State (ISIS or ISIL) has expanded beyond its original territory in Iraq and Syria and is working to establish a base of operation in North Africa. Libya is the catalyst for such aspirations, given its chaos since the fall of Muammar Qaddafi in 2011. The initial uprising against Qaddafi included Islamist forces and, since the end of the revolution, militias have found the freedom to operate while the Tobruk-based House of Representatives (House) and Tripoli-based General National Congress (GNC) vie for control. With this context in mind, how does ISIS operate and what are its strategic interests in Libya?

ISIS seeks to expand its power, project itself as the true defender of Islam, conquer land, subdue Libyans, and exploit Libya’s oil. It intends to accomplish these strategic priorities through a campaign of unfathomable violence and persistence to its goal of establishing a caliphate. The means to this end require ISIS to be the meanest, baddest, most intimidating option so that people have no choice but to accept its rule—or pay the penalty of death. The Islamic State’s aspirations within Libya are part of a long-term strategy within its plan for regional control—inhibited to an extent by limited numbers of fighters and supporters, capacity, and territory. However, the rapid rise of the group in the Levant demonstrates the disturbing trend that it has the capability to repeat such a campaign in Libya. A new landscape may emerge for ISIS to threaten Libya, its neighbors, and the West.

The group’s first priority aims to outmaneuver both the Tobruk-based and Tripoli-based governments, preoccupied battling each other, by asserting its influence and pushing the government factions out of the way. Nowhere is this more visible than in Tripoli, which is nominally under the control of the GNC, but in reality, Libya Dawn forces. This coalition of Islamist militias often intermingle with ISIS forces, operating outside the entity’s jurisdiction and sometimes even attacking it. ISIS’s recent attack on the Tripoli Revolutionaries Brigade headquarters (a militia in Libya Dawn and allied to the al-Hassi government) demonstrates a clear attempt to undermine the Tripoli government. ISIS has also targeted other militias in Tripoli in an effort to drive them out and convert people to its cause. The group also claimed responsibility for bombings in the eastern town of Qubbah, under the control of the Tobruk government, which targeted a petrol station, the security headquarters, and the town council headquarters. The attack killed forty-two people and injured seventy.

Second, ISIS wants to show itself as the true protector of Islam against the Crusaders. The murder of twenty-one Coptic Egyptians, which prompted swift retribution from Egypt and calls from Abdullah al-Thinni for an international effort against ISIS elements, stems directly from this priority. A statement issued by ISIS explained the Qubbah attack was revenge for the bloodshed of Muslims in Derna. Given this eventual outsider presence, ISIS is positioning itself to defend Libya’s Muslims, its sovereignty, and its right to protect itself. As part of showcasing its prominence as the true defender of Islam, ISIS uses these brutal tactics of kidnapping and murdering Christians or others as a way to draw in international fighters and legitimize its struggles while drawing support from the local population. The ISIS leadership has sent a Tunisian known as Abu Talha to be the Emir of Tripoli, responsible for eastern Libya, and a Yemeni named Abu al-Baraa al-Azdi to be Emir in Derna, responsible for western Libya. A top ISIS cleric, Bahraini Turki al-Binali went to Sirte to preach in 2013 and late 2014 to draw local recruits. Now radio stations play speeches by Abu Bakr al-Baghdadi and songs that encourage people to pledge allegiance to ISIS. This effort pursues a consensus around ISIS as the lone guarantor of safety to Libya’s Muslim community.

Third, territorial control is essential to any strategic plan for conquering Libya. As of now, ISIS supporters and militias have established strongholds in cities along Libya’s Mediterranean coast. These littoral bases allow for an easy flow of men and goods by sea from the Levant and Europe. The cities of Derna and Benghazi are in eastern Libya, Sirte is central, and Tripoli is in the west. The strategy now is to connect these areas of operation into a larger, unified territory. This effort can already be seen as ISIS forces entered the area of Ben Jawad, about 140 km east of Sirte and only accessible via the major coastal highway. If ISIS controls Sirte and the Ben Jawad area, then it controls the coastal highway and any movement between the cities. The group will seek to secure other such roadways connecting its bases in order to move efficiently across Libya.

Fourth, ISIS also has its eye on Libya’s oil and seeks to either attain or prevent anyone else from accessing it. ISIS militants attacked the al-Mabrook oil field in a raid that killed twelve people. Pipelines have been sabotaged and almost all of the terminals are shut down due to the danger fighting poses. Should ISIS acquire this resource, they will gain an advantage over both the Tripoli and Tobruk governments.

Despite the alarming news, the promotion of the UN-led peace process is a silver lining resulting directly from the ISIS expansion in Libya. The shared threat by ISIS to the House and GNC governments may spur the UN-led dialogue efforts and push the rival factions together into a unity government with the common bond of battling the terrorists. The ongoing Geneva Dialogue has so far resulted in limited progress, but the gravity of the situation may force concessions on both sides and cooperation in solidifying a stable government.

Yet, this optimism comes with a caveat: the Tobruk government’s welcome of Egyptian intervention against terrorism, in which it does not differentiate between ISIS and the Islamist Tripoli forces. With Egyptian support since at least summer 2014, despite the UN embargo, Abdullah al-Thinni, the Prime Minister of the Tobruk government may not see a need to cooperate with a military victory in sight. Egyptian President Abdel Fattah al-Sisi has all the legitimacy he needs to continue his assaults in Libya due to the savage murders of the Egyptian Copts. With the help of Egypt, al-Thinni may press ahead militarily rather than negotiate in full confidence with the GNC. But even if Egypt helps Tobruk claim power, al-Thinni will continue to need Sisi’s assistance with an open-ended engagement to hold power given that the Libyan National Army forces cannot yet control all of Libya by itself.

The UN Security Council’s refusal to support Egyptian military intervention and to lift the arms embargo on the Tobruk government comes as a positive development, demonstrating its sensitivity to fueling the political crisis in Libya. The United States and Great Britain have stated they will only remove the embargo once a unity government is in place.

UN efforts toward a unity government represent one of the only outlets to a comprehensive solution. There is no alternative to the present situation: a mutually devastating stalemate between the warring factions. The clearest and most promising path forward will rely on creating a unity government and coordinating efforts to defeat ISIS and rebuild Libya.

Chris Chapman is a research intern for the Rafik Hariri Center for the Middle East, focusing on North Africa.