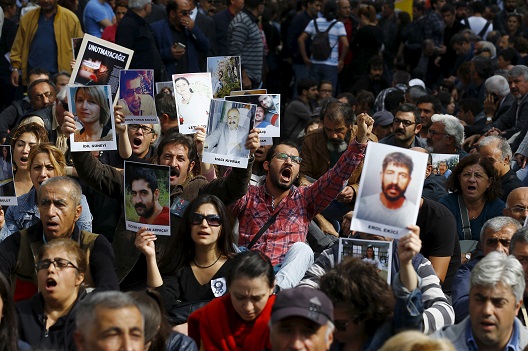 On Saturday October 10, two bombers detonated suicide vests near the main Ankara train station, killing ninety-seven people gathering to attend a peace rally. The incident is Turkey’s worst terrorist attack and comes two months after the Turkish Air Force began airstrikes in support of the US-led coalition to fight the Islamic State (ISIS or ISIL) in Syria. While no group has claimed responsibility for the attack, Turkish Prime Minister Ahmet Davutoglu has indicated that ISIS is the prime suspect. Although ISIS has never taken credit for any attack inside Turkey, Turkish citizens who fought with the group carried out at least two previous bombings.

The Turkish daily Cumhurriyet has reported that Yunus Emre Alagoz carried out the October Ankara bombing with Omer Deniz Dundar. Yunus Emre’s younger brother, Seyh Abdurrahman Alagoz, carried out a suicide attack in the border town of Suruc on July 20, killing thirty-three people who had gathered to deliver aid to the neighboring city of Kobani. In June, a bombing also targeted a Kurdish rally in Diyarbakir. The Turkish government has yet to confirm officially Yunus Emre’s involvement in the Ankara attack, but Deputy Prime Minister Numan Kurtulmus has noted the similarity between the two bombs designs in both the Suruc and Ankara attacks. While still unconfirmed, the evidence suggests that an ISIS-inspired cell based inside of Turkey has just committed its third such bombing.

The Alagoz brothers and Dundar come from the city of Adiyaman, with all three having spent time inside Syria fighting with ISIS before returning to Turkey to staff an informal mosque and teahouse. Another former ISIS fighter who returned to Adiyaman (along with a Syrian woman he married) from Syria in 2014, Muhamet Gazi Dokumaci, had reportedly established the teahouse and mosque under Yunus Emre’s management. Seyh Abdurrahman reportedly spent time there every day with a third man, Orhan Gonder. All three men are ethnically Kurdish, underscoring ISIS’s cross-ethnic appeal.

The Adiyaman mosque operated for at least a year, despite numerous city resident complaints to Turkish officials that it doubled as a recruitment center for ISIS militants. Up to fifty people would gather at the mosque every Friday for prayers and religious instruction, widening the potential network of ISIS sympathizers in the town. In the aftermath of the Suruc bombing, Turkish police shut down the establishment and detained ten people in Adiyaman for questioning. The police later released all ten, most likely due to a lack of direct evidence proving foul play.

Gonder faces charges for the detonation of two propane tanks at a pro-Kurdish Peoples’ Democratic Party (HDP) campaign rally in Diyarbakir last June that killed four people. These three men may have gone to Syria together before returning to Turkey in late May or early June 2015. Upon his return, police arrested Gonder in a Diyarbakir hotel for dodging military service, but then let him go, reportedly because the police lacked access to the correct database that listed him as a potential terrorist suspect.

The police have yet to find Yunus Emre, prompting speculation of his involvement as one of the two bombers in the Ankara attack. Security sources cited by Cumhurriyet claim that Yunus Emre and Dundar travelled from Gaziantep to Ankara in recent days by car and have reportedly been working with a third person, listed only as Y.S. in the Turkish media. According to recent US Treasury terror designations, ISIS has a well-established network in Gaziantep.

Beyond the similar suicide vests, the Ankara bombing shares other similarities to the Diyarbakir and Suruc bombings. In all three instances, the men attacked Kurdish or HDP-related targets (even though in the cases of Suruc and Ankara, the blast was indiscriminate). Although a wide range of political actors—mostly labor movement, NGO, and leftist activists—organized and attended the peace rally in Ankara, the bomber clearly targeted the Kurdish section of the event. In footage released of the explosion, one can see the HDP, the Ezilenlerin Sosyalist Partisi (ESP), the Sosyalist Yeniden Kurulusa (SYKP), and the Marksist-Leninist Komunist Partisi (MLKP) flags in the background, delineating each political grouping.

Similarly, the Diyarbakir bombing targeted an HDP campaign rally and the Suruc bombing targeted the ESP, formerly headed by HDP co-chair Figen Yuksekdag. The choice of targets appears tangentially linked to Kurdish support for and participation in removing ISIS from Kobani in June 2015. The MLKP (sister party to the ESP) had sent a handful of fighters to Kobani to fight with Kurdish Democratic Union Party (PYD) against ISIS. The Kurdish link between these three attacks underscores how elements of the Syrian civil war have spilled over the border and started to destabilize Turkey.

Turkish security officials have privately indicated that ISIS did not likely order these attacks, but instead gave general guidance to attack Kurdish targets in Turkey to foment political and ethnic tensions. ISIS’s Turkish publication Konstaniyye featured articles that discussed the “morality of suicide attacks,” along with a cover story praising two other Turkish suicide bombers. Certainly, the Diyarbakir and Suruc attacks contributed to the escallation of tensions between the Kurdistan Workers’ Party’s (PKK) and the Turkish government.

For the past two years, the government has been negotiating with the PKK’s imprisoned leader, Abdullah Ocalan, to end the PKK’s insurgent campaign against the Turkish government for political autonomy. The two sides had agreed to a ceasefire in 2013, but the process was frozen in March 2015. In mid-July an umbrella organization linked to the PKK declared an end to the ceasefire. In response to the Suruc attack, the PKK killed two Turkish police officers in Urfa, purportedly in retaliation for government complicity in the attack. The killing of the two polices officers prompted the Turkish government’s ongoing airstrikes against the group in Iraqi Kurdistan and southeastern Turkey, despite the announcement of a unilateral PKK ceasefire.

The HDP repeatedly accused the Justice and Development Party (AKP) of being complicit in these attacks, citing the failure to shut down the Adiyaman mosque and the government’s poor enforcement of border security with Syria. The AKP brushed off these criticisms, accusing the HDP of capitalizing on these events for political gain. This polarization comes amid continuing violence from PKK attacks in southeastern Turkey, which have resulted in 146 security personnel deaths and another 297 injured since July 20.

In the wake of the Ankara attack, the government faces questions about its handling of security for the rally and for its failure to crack down more harshly on ISIS-linked individuals inside Turkey. Following the attack, Turkish authorities carried out numerous raids throughout the country. Police have detained seventy-nine suspects and formally arrested one since October 10. While June, July, and August saw a similarly high level of activity in countering Turkey’s domestic ISIS problems, such efforts slowed in September. The slowdown in ISIS arrests coincided with a sharp increase in attacks on and by the PKK, including two IED bombings that killed thirty soldiers between September 6 and 8. It also comes amid the government’s continued raids against the Fetullah Gulen organization, which the National Security Council elevated to a national threat in 2014—a bureaucratic designation that puts the group on par with ISIS and the PKK. Resource reallocation stemming from Turkey’s intense focus on the PKK and the purge of Gulenists with significant counterterrorism experience in recent months could explain the stalled efforts to counter ISIS in Turkey.

Image: Demonstrators hold portraits of those killed by Saturday's suicide bombings as they attend a commemoration in Ankara, Turkey, October 13, 2015. (Reuters)