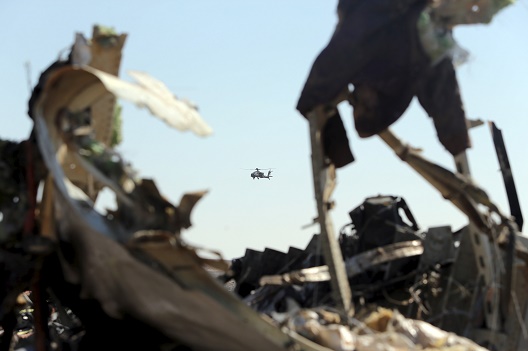 The Islamic State (ISIS or ISIL) branch in Egypt’s Sinai Peninsula claimed responsibility for downing Metrojet flight 9268 on October 31. If the group managed to infiltrate Sharm al-Sheikh airport and put an explosive device on the Russian plane, that would be a great achievement for the group and a massive blow to Egypt’s image as a secure destination for tourists. However, whether the Sinai State (as the ISIS’s Egypt affiliate is known) was responsible or made an opportunistic claim, the group’s willingness to even rhetorically target foreign interests in Egypt is another dangerous marker in a pattern of threats to avenge its parent organization within its area of operations.

Sinai militancy is not new. Neither is terrorism in Sinai targeting tourists and international interests. It should be noted that the Sinai State presents itself as a successor organization of Tawhid wal Jihad, whose bombings from 2004-2006 targeted Israeli, European, and Arab tourists in the South Sinai resort towns of Taba and Nuweiba, Sharm al-Sheikh, and Dahab. Additionally, the founding raison d’etre of Ansar Bayt al-Maqdis (ABM)—as the Sinai State was known before it linked up with ISIS—was targeting Israel and Egyptian-Israeli ties.

Indeed, ABM targeted tourists in February 2014, when a suicide bomber walked onto a bus of South Korean tourists parked near the border with Israel. What made that attack different from the recent claim, however, was that in 2014 the group made clear it was targeting tourism not tourists: the South Koreans were not targeted for being foreigners, or Christians, or on their way to Israel. It was likely unplanned that the victims would be Korean. Instead, ABM justified the attack as part of its “economic war” against the Egyptian state.

Since pledging allegiance to ISIS a year ago, however, the renamed Sinai State has repeatedly described its actions as retaliation for various nations’ military strikes against the extremist group in Iraq and Syria.

Justifying its attacks within the context of the ISIS-global war first occurred in January 2015. Sinai militants that month blew up Egypt’s gas pipeline to Jordan. Sinai pipeline bombings were a hallmark of ABM and they have been attacked some three-dozen times since Egypt’s 2011 uprising. What made this instance—and others since—different was the Sinai State’s rhetoric in claiming responsibility. Jordan was a member of the anti-Islamic State coalition; as long as this participation continued, warned the ISIS affiliate, no gas would reach Jordan from the Sinai.

This rhetorical shift should have been the first indication for nations in the anti-ISIS coalition that the Sinai State may retaliate against their interests in Egypt—and especially in Sinai. Those chiefly vulnerable are the contingents of the Multinational Force and Observers (MFO): the international organization monitoring compliance of the Egypt-Israel Peace Treaty. Australia, Canada, the Czech Republic, France, Italy, the United Kingdom, and the United States are all fighting ISIS in Iraq and Syria and also have troops deployed in Sinai with the MFO. In the Sinai State’s first attack on the MFO’s North Camp base—south of Sheikh Zuweid—in June of this year, the group referred to the organization as “crusader forces” in Sinai to protect Israel.

The next victim of retaliation was a poor Croatian mineral worker, Tomislav Salopek, who happened to be kidnapped by the wrong people while traveling toward Egypt’s Western Desert in July. Sold to the Sinai State, the group first threatened him with death if Egypt did not release “Muslim women” from its prisons. The militant group probably had no intention of capturing a Croatian and was hoping its prize was higher profile (Salopek worked for a French company). ISIS made the most of the incident. The Sinai State’s initial video message was clearly meant for international companies investing in Egypt. As the clock ticked down on the Croatian’s life, however, ISIS and its affiliated media began pointing to Croatia’s involvement in the international coalition—specifically providing arms to the Iraqi government and to the Kurds. Although this was just propaganda to make the most of a low-profile kidnapping, again the Sinai State was seen tying its actions to vengeance for anti-ISIS policies.

The Metrojet crash is the latest—and most spectacular—in this pattern of retaliatory claims. Hours after the crash, the Sinai State released an official statement claiming responsibility for downing the plane. The claim specifically noted the high number of Syrian civilians killed by Russian airstrikes and warned Russians that “you are not safe anywhere” as long as the military campaign alongside Syria’s embattled government continues. Although ISIS has taunted the world by withholding evidence of its claim, the likelihood that the plane was downed by an act of terrorism has been sufficient enough that the United Kingdom, Russia, and other nations and airlines halted and restricted flights from Sharm el-Sheikh and even Cairo.

An attack on a Russian aircraft, specifically, also would fit the Sinai State’s historical duality of attacks that serve a local end (in this case the “economic warfare” of scaring away the largest pool of non-Arab tourists) couched in the rhetoric of serving the international interests of ISIS (retaliating against Russian civilians for their military’s operations in Syria).

Until now, ABM/the Sinai State had moved cautiously against the MFO and against tourists: recognizing the sensitivity and importance of both to the local Sinai population. By taking credit for the Metrojet crash—and by jeopardizing Sinai tourism without even proving its involvement in the tragedy—the message from ISIS is that all bets are off: the Sinai State is going after international interests even if doing so damages the economic interests of the local population. That means foreign tourists, workers, and troops in Egypt are at greater risk than ever.

Image: An Egyptian military helicopter flies over debris from a Russian airliner which crashed at the Hassana area in Arish city, north Egypt, November 1, 2015. (Reuters)