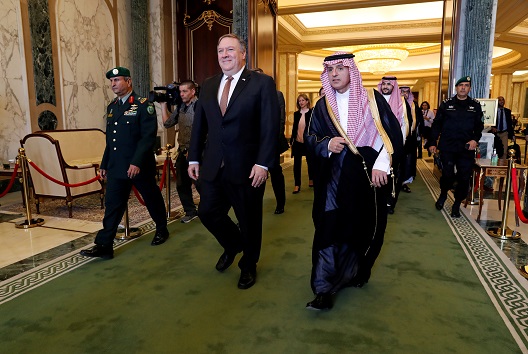 The murder of Jamal Khashoggi—a resident of the United States and a citizen of a Kingdom that owed him protection—highlights the purely transactional nature of the relationship between Riyadh and Washington. Although the transactions themselves are important—ensuring the secure transit of petroleum supplies to the world market, sustaining intelligence exchanges on terrorist threats, countering Iranian destabilization, and a security assistance relationship that projects protective American power while boosting the American defense industry—Saudi actions undermining the transactions themselves mandate for Washington a time-out and reset.

Ironically, it is the murder of one good man rather than sustained Saudi actions in Yemen and Syria, persistent Saudi sectarianism, and negative Saudi attitudes toward consent of the governed in the Arab world that mandates a long-overdue American policy review. But the loss of this man may be what it takes for Washington to do its duty. Ideally, this review will result in the mutually agreed reset of a vital relationship, one allowed to fray dangerously during the Obama administration.

The murder of Mr. Khashoggi gives considerable (if unintended) aid and comfort to the violent kleptocracy running Iran and its apologists in the West. Those who conceived of entrapping Khashoggi in the Istanbul consulate and ending his life may as well have been on the Iranian payroll. After all, Tehran and its supporters have, for years, relentlessly propagated the theme that Saudi Arabia is the heart of darkness: the well-spring of “Wahhabi” extremism, the midwife to al-Qaeda, a misogynistic polity reflecting the pre-Islamic Age of Ignorance, and an Arab version of North Korea (albeit with oil wealth). The Saudi Crown Prince had demonstrated genuine interest in ending Iran’s free, unjustified, and often racist ride to information dominance over his Kingdom. The Khashoggi murder undoes it all.

This writer commented in this blog several months ago on the abomination that is Yemen. One need not (and should not) accept the thesis that Saudi pilots—like their Syrian and Russian counterparts—deliberately rain murderous terror on defenseless civilians to conclude that the abomination itself must end. Yes, Tehran maliciously stirs the pot in Yemen. Yes, the Yemeni enemies of Saudi Arabia occasionally lob missiles into the Kingdom. But the suffering of humanity in Yemen is so grotesque, so comprehensive, and so inadmissible as to mandate an immediate ceasefire, full (and coercive, if necessary) American support for United Nations peace efforts, and an end to the abomination. The destruction of Yemen and its people serves no American or Saudi interest. It is a horribly unforced error.

This writer has tried, in and out of government, for over seven years to influence the course of American policy in Syria. Very early in that conflict—when opposition to the Assad regime took the form of nationalistic, non-sectarian, peaceful protest against state terror—the regime based its survival strategy on both militarizing and sectarianizing the struggle for power. Saudi Arabia and others played into the hands of Bashar al-Assad by projecting their own sectarianism into Syria, supporting actors whose proclamations of Sunni purity combined with criminal depredations to pollute the opposition to Assad and solidify his base of support. Those policies and the indifference of the Obama administration toward regime mass homicide combined to sustain Assad and set the stage for successful Iranian and Russian military intervention.

This writer has often suggested that the demand for consent of the governed was at the heart of the youth-led Arab uprisings of 2011. For real, persistent, political legitimacy, and stability to take hold—for extremists to be marginalized and neutralized—citizenries must be willing to support and defend the systems that govern them, even during hard times and periods of executive and legislative failure. This systemic citizen support must be voluntary and near-unanimous; it far transcends mere majorities. A country (for example) in which a significant minority believes the wrong president is behind bars is a country with a significant legitimacy problem. Where do legitimate political systems exist in the Arab world? What are the implications for Western security—including the security of the United States—of chronic regional illegitimacy?

If Washington believes that political legitimacy is important, and that consent of the governed is at its root, how does it evaluate Riyadh’s position on this issue and its attitudes toward the post-2011 resurgence of authoritarianism? What support has the Kingdom provided to Tunisia, a country that struggles to achieve the economic and security baselines needed to secure the consent of the governed to a system reflecting decent human values? This is not about made-in-Washington “democracy promotion.” Neither is it an argument that the Saudi monarchy is itself illegitimate. Rather it is a question: if the United States and its Western allies see their own security interests enhanced by the growth of political legitimacy in the Arab world and the consent of the governed underlying it, then how have Saudi actions in the region impacted on Western security?

Indeed, one may ask how the Saudi monarchy evaluates its own legitimacy if key figures therein saw Jamal Khashoggi—of all people—as an enemy worth killing. Obviously, it is incumbent on the ruling family to get its house in order and, in the Khashoggi matter, to bring to justice all who played a role in this monstrous act and its blatant betrayal of the duty to protect. The hopes of Saudi youth (irrespective of gender and sect) for real reform that unlocks and unblocks their own creative and entrepreneurial talents depend entirely on the willingness of their rulers to be more than modernizing despots. That, after all, was the role aspired to by Bashar Al Assad in Syria. Now he presides over ruins.

Washington must take stock of this bilateral relationship. Mutual trust and confidence will not come from enabling bad policies and turning a blind eye to one’s own security interests in the Arab world at large. And Washington must set a proper tone. Labeling members of the press as enemies of the people is neither an American custom nor reflective of American values. It may not have been a factor at all in inspiring the outrage visited on Jamal Khashoggi. But in a world where gratuitous political violence is increasingly accompanied by the presumption of impunity, careless and inappropriate language cannot help.

This relationship is worth saving. Indeed, it must be saved. But the foundation itself must be inspected, repaired, and strengthened. Jamal Khashoggi died in the hands of those obligated to protect him. Justice must be served. Ideally his unjustified death will, in time, lead to comprehensive reform in the Kingdom, a Kingdom supportive of consent of the governed both internally and throughout the Arab world, and a relationship of real trust and confidence between Riyadh and Washington. Such an outcome would be a vital component of justice being done, one that Jamal Khashoggi would surely appreciate.