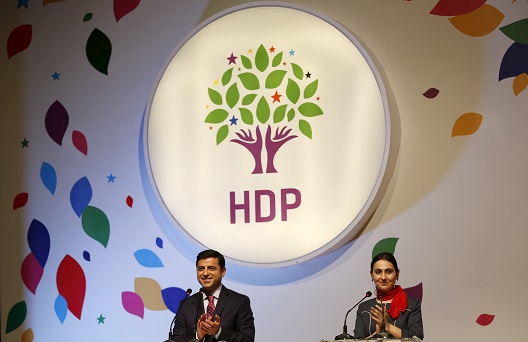 In the past few weeks, Turkey’s major political parties have ramped up their campaign for the June 2015 national election. After years of electoral dominance, numerous polls suggest that Turkey’s ruling Justice and Development Party (AKP) may lose seats. By contrast, Turkey’s Kurdish political party, the People’s Democratic Party (HDP) and Turkey’s far right nationalist party, the Nationalist Movement Party (MHP), have seen their expected vote totals increase. Although he is not officially on the ballot, this election will determine the future of Turkey’s most powerful politician: President Recep Tayyip Erdogan.

Faced with flat poll numbers, Erdogan has recently gone on the offensive and effectively frozen his ambitious effort to end Turkey’s decades old civil war with the Kurdistan Workers’ Party (PKK)—the insurgent group with links to the HDP. He did so for two reasons: the peace process has helped improve the HDP’s image with Turkish liberals, which has prompted far-right nationalist voters to defect from the AKP in favor of the MHP. This increased support for the HDP has threatened to derail Erdogan’s efforts to win enough parliamentary seats to shift Turkey’s power balance toward the office of the president.

In 2011, then-Prime Minister Erdogan argued in favor of a radical change to Turkey’s parliamentary representative democratic republic. To hasten the creation of what the AKP has dubbed “The New Turkey,” Erdogan proposed the creation of an executive presidential system with few checks and balances that centralizes decision-making powers and strengthens the presidency. He has argued that this necessary shift would help overcome the disadvantages inherent in the US political system: partisan gridlock exacerbated by overly cumbersome checks and balances.

The opposition has seized on Erdogan’s proposal, labeling it as steps towards dictatorship. These attacks, in the context of intense political polarization, have resulted in a backlash against the Erdogan initiative, even among likely AKP voters. Despite the controversial reception of the idea, the AKP has made the presidential system the centerpiece of its election manifesto. For the AKP, the magic number is 330. If the party wins this many seats in the parliament, it would be able to push the necessary constitutional changes to enact Erdogan’s plan through parliament and on to a public referendum.

The biggest challenge to the pursuit of 330 seats lies with Selahattin Demirtas, the co-chair of the HDP. Traditionally, Turkey’s Kurdish movement has sought to circumvent the 10 percent electoral threshold for parties by running as independents. After winning in Kurdish majority areas, the independents would caucus as one party. The HDP has pledged to forego this tactic in favor of running as a unified party.

The HDP’s poll numbers have showed that the party has nearly 10 percent support nationally, which would put the party at the precipice of the electoral threshold. If the party fails, the votes cast for the HDP would be reallocated, with the AKP (the only other party that wins a large number of votes in Kurdish areas) being the primary beneficiary. As such, the AKP could win 330 by virtue of the HDP’s loss. Faced with dual challenge of the HDP and the MHP, the AKP has sought to reestablish its right wing bona fides. It has done so by freezing the peace talks with the PKK and giving a freer hand to the military to crack down on PKK-related activities in the southeast after a year-and-a-half of largely ignoring the PKK’s presence. This change in tactics has already resulted in a clash between the Turkish military and the PKK.

In a rural village in Agri province in Turkey’s southeast on April 11, a Kurdish-organized political event turned violent after a military unit reportedly dispatched at the request of the local governor exchanged fire with Kurdish activists. The clash resulted in four wounded Turkish soldiers and the death of Cezmi Budak—a former official from the HDP’s sister party, the Democratic Region Party (DBP).

The clash has since fueled political mudslinging. The DBP and HDP blame the Erdogan and his party, citing sagging poll numbers and rumors of a deliberate military effort to instigate a confrontation with the Kurds to boost the AKP politically as evidence of a plot. Demirtas has explicitly accused the army of abandoning soldiers at the site to inflate the death toll, praising the Kurds who were fired upon for helping to rescue the wounded soldiers. The military denies the allegations, saying the helicopter sent to rescue the soldiers could not land due to a drawn out firefight with the PKK. The AKP, by contrast, has blamed Demirtas, citing his party’s links to the PKK and his refusal to disarm as the reasons for the firefight.

Absent a comprehensive account of what actually happened, these two divergent narratives have taken hold, raising tensions between the government and the HDP. Demirtas will certainly have to walk a fine line to appeal to his natural Kurdish base while also seeking to retain the soft support he has won from Turkish liberals. The AKP’s strategy is easier to discern: link Demirtas to the PKK, thereby redistributing liberal votes to weaken the HDP and prevent the party from blocking its quest for 330 seats.

If successful, the AKP’s tactics could have consequences for the future of the peace talks. First, the HDP has hitherto acted as a go-between for the PKK’s imprisoned leader, Abdullah Ocalan, and the group’s military command in the Kandil Mountains inside Iraqi Kurdistan. Absent representation in parliament, it is unclear under what capacity this HDP led delegation would act—if at all. Second, inadequate Kurdish representation in the parliament could prompt the DBP to establish a rival parliament in Diyarbakir.

In either scenario, the AKP would have incentive to appeal to the nationalist right, owing to the need to secure support for a new constitution. The more nationalist the party leans, the more likely that tensions would remain high and renewed clashes would erupt, similar to the one that took place in Agri. However, some speculate that the HDP could concede the threshold and give Erdogan the majority he needs in a secret agreement. In exchange, Erdogan would include language in a new constitution that gives Kurdish-run municipalities greater autonomy. Indeed, these rumors could weaken the HDP among the liberal Turks whose votes it needs to pass the threshold, owing to their intense dissatisfaction with Erdogan. Demirtas has sought to dispel any notion of an agreement, saying in a recent speech to the HDP caucus in parliament that his party has struck no such deal and would never support a strengthened presidential system.

If the HDP does break the electoral threshold and deny the AKP its majority, the two parties could reconcile and continue the peace talks. Both would have a shared interest in a return to the pre-election status quo. If the AKP only barely manages to retain its current plurality, then the Kurdish position will be strengthened. In this scenario, an empowered Demirtas would face pressure to follow through on his pledge to block Erdogan’s ambitions, threatening increased tension.

Turkey’s political future is tied to the success of the HDP, which holds the key to Erdogan’s presidential ambitions. Erdogan has chosen to challenge the party directly, signaling a willingness to deal with the consequences of an “HDP-less” post-June parliament. The HDP, by contrast, has made it clear that it will not support Erdogan’s presidential ambitions. The possibility for a grand bargain is in play, but so is a return to violence. Much depends on mutual trust, which is now being sacrificed for political reasons.

Aaron Stein is a Doctoral Fellow at the Geneva Center for Security Policy and an Associate Fellow at the Royal United Services Institute in London.