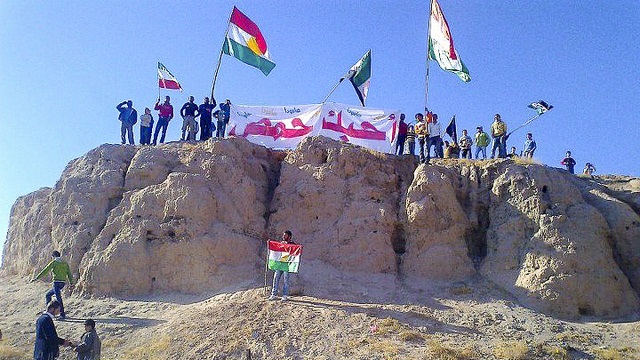 President Bashar al-Assad’s recent victories in Aleppo, Homs, and Damascus could pose a threat to Kurdish gains in the future. In the run-up to the Syrian presidential elections taking place on June 3, clashes increased between Kurds and government. If the stalemate continues, the Kurds will benefit, but if one side wins—either Assad, or the fragmented opposition—the Kurds will have to make difficult choices.

Initially, the opponents of Assad and regional rivals of the Syrian government expected a quick downfall of the regime. But Iran and Russia’s almost unconditional support for Assad and the refusal of the Western countries to intervene in Syria, ensured the survival of the Assad regime.

The Syrian unrest has evolved over three phases: (1) civil unrest and demonstrations (2) militarization of the Syrian civil war, and (3) Islamization of the rebellion due to an influx of foreign jihadist fighters. The Islamization of the civil war also prevented Western interference and resulted in rebel infighting. The last phase of the conflict could see Assad regaining most of Syrian territory unless, the West or other regional actors make new moves to arm local actors. The Kurds will not be able to keep their autonomy if either Assad or the rebels win.

The Syrian Kurds tried to play a neutral role to control as much as territory as possible and benefited from the ongoing civil war in the rest of the country. The Democratic Union Party (PYD) affiliated with the Kurdistan Workers’ Party (PKK) managed to become the dominant actor on the ground due to the influx of experienced PKK fighters that trained Syrian Kurds, grassroots supporters, and organizational networks. Moreover, while Assad and his opponents fought each other for power in the rest of Syria, the PYD managed to cement its control over three Kurdish enclaves in the country’s north.

Many PKK fighters returned to Syria during the civil war. Jordi Tejel, an expert on Syrian Kurds says, “already in April 2011 the PKK sent one thousand armed fighters to establish the YPG in Syria. The partial withdrawal of Syrian security forces from northern Syria in the summer of 2012 allowed the PYD to become the main political as well as military actor in those regions.”

In the past, between seven and ten thousand Syrian Kurds in the PKK died fighting against the Turkish state in the 1980s and 90s. The Syrian government allowed the PKK to recruit Syrian Kurds to pressure Turkey. This lasted until PKK-leader Abdullah Öcalan was expelled in 1998 after Turkish army pressure. As a result of this past collaboration, the PKK managed to gain influence among Syria’s Kurds.

Opponents of the PKK suggest Assad withdrew from northern Syria and gave the north to the PKK in order to counter Turkish influence in northern Syria. But the PYD suggests that that Assad does not want to fight several fronts at the same time. Still, the Syrian government controls the airport in Kurdish-dominated city of Qamishli and some security centers in the city.

The PYD’s militia, the People’s Protection Units (YPG), created by former PKK fighters, do not have any project to remove these regime forces unless they attack the Kurdish areas, fearing regime bombardments. Nevertheless, they have fought several turf battles with Syrian rebel groups and Assad’s security forces in Aleppo, Raqqah, and Hasakah provinces. Both Assad and Syrian rebel groups are committed to the territorial integrity of Syria and oppose any Kurdish nationalist projects.

“It’s not in our advantage to bring the war inside the Kurdish regions. But if attacked, we will never stop to fight the regime,” YPG spokesperson Redur Xelil says.

In beginning of the Syrian civil war, the PYD criticized the Free Syria Army (FSA) rebels and Turkish support for Syrian insurgent groups. But the language of the PYD slowly started to change in January 2014 after the Kurds found common ground with rival rebels to fight against the al-Qaida-inspired ISIS (Islamic State of Iraq and al-Sham) in Raqqah and the Aleppo countryside. Moreover, they claim Assad secretly supports ISIS to weaken the Kurds.

As a result, the Kurds and other rebel groups fought against ISIS in the countryside of Aleppo and Raqqah. The main battles took place in Azaz, Manbij, Jarabulus, Raqqah, and Tel Ebyad. In April, Ahl al-Sham operations room (composed of Jabhat al-Nusra, Jaysh al-Mujahideen and Islamic Front) and the YPG reached an agreement to confront ISIS. The Kurds say the regime uses ISIS to annihilate the FSA and other rebel groups (although the ISIS denies any links with the Syrian regime) and suggests the rebel groups fought ISIS on Western orders.

The agreement does not mean that the YPG will jointly fight the Assad government, but “if the FSA decides to attack the regime somewhere, it is up to them. From our side, we will protect ourselves. But fighting with the regime is fighting with ISIS. There is some kind of agreement between the ISIS and the regime,” says PYD member Gharib Hesso.

Syrian Kurds suggest that after the failed Geneva 2 peace conference in January, the Syrian government is trying to sow instability in the north by sowing ethnic tensions and attacking Kurds.

“Before Geneva 2 they were hiding themselves [government security] when they saw a YPG member  After Geneva 2 they have become a bit more confident,” says Kurdish politician Aldar Xelil in Amuda, Syria.

There were attacks on December 31 and March 27 against Kurdish positions in Hasakah and on March 12 clashes erupted after Syrian security forces killed a YPG fighter in civilian clothes. On May 19 clashes erupted again when Syrian security forces attacked a Kurdish checkpoint in a Kurdish neighborhood in Hasakah. The attacks show that the Syrian government is still opposed to any Kurdish status in Syria.

Furthermore, when the Syrian government took over the isolated Kurdish towns Tel Aran and Tel Hassel in the province of Aleppo in November 2013, from rebel groups, local Kurds were forced to join regime-militias, and they did not allow the YGP or PYD to operate.

The Syrian regime is now planning its next phase after capturing Homs by encircling Aleppo and forcing Syrian rebel groups to give up their campaigns. This might be the reason that Syrian rebels that are under pressure of Assad and ISIS attacks, would make a deal with Kurds in order to combat the ISIS and Assad.

If the regime is able to take control of Aleppo, it could possibly try to take back Kurdish-controlled areas. Although the Kurds still think the Syrian government is too weak, Turkey would not mind a return to earlier anti-PKK cooperation with the Syrian government. Another possibility is that the Syrian government would decide to recognize constitutionally the Kurdish administrations in order to prevent heavy clashes.

The Syrian Kurds could counter the growing strength of the Syrian government by cooperating with anti-Assad groups as they are doing now, or reach an agreement with the Syrian government in the future. How Kurdish relations unfold will depend on highly fluid, unpredictable war dynamics and the changing balance of power. So far, it seems the stalemate will continue, but the Kurds will face difficult choices in the future.

Wladimir van Wilgenburg is an analyst of Kurdish politics for the Jamestown Foundation and a contributing writer for Al-Monitor.