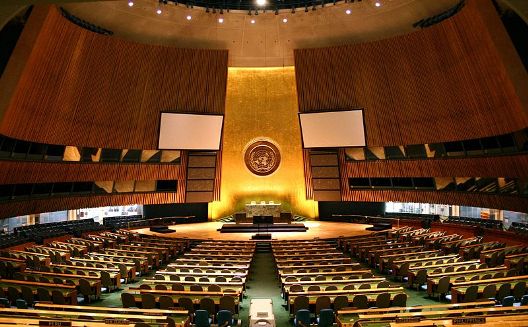 On August 31, 2013, MENASource published an article by J. Trevor Ulbrick, Paul R. Williams, and Jonathan P. Worboys setting out a legal case for military intervention in Syria. The authors, all respected commentators on public international law, argue that the “Responsibility to Protect” (R2P) doctrine would legally sanction the limited use of force against Syrian military objectives to “protect Syrian civilians from another chemical weapons (CW) attack.” Several governments, including those of the United States and the United Kingdom, accuse the Assad regime of having employed CW in the current conflict. Still others question (e.g., China) or outright reject (e.g., Russia) that claim, while the United Nations investigation team that traveled to Syria has yet to complete its inquiry. Even if Assad is guilty as charged, would international law permit any outside use of force against his government within the foreseeable future? The answer is no.

The Charter of the United Nations codifies the applicable legal regime. With the ashes of World War II still smoldering in 1945, delegates from 50 countries gathered in San Francisco to painstakingly negotiate a treaty aimed at making war a thing of the past. The result, the UN Charter, was largely the handiwork of the American, British, Chinese, and Soviet governments— the same deuteragonists in the current Syrian tragedy. Today, the UN includes virtually every country in the world and its Charter establishes the legal framework for maintaining international peace and security.

Toward that end, all UN members agree to “fulfill in good faith the obligations assumed by them in accordance with the present Charter” (Article 2(2)). One of the most, if not the most, important of those obligations is for countries to refrain from the threat or use of force in their international relations (Article 2(4)). Excluding the now obsolete World War II “enemy states” clauses, the UN Charter enumerates two exceptions to that general rule: the use of force pursuant to Security Council authorization (Article 42) or in self-defense (Article 51). During the preparation of the Charter, the question arose as to whether those two provisions were exhaustive or merely illustrative, which, if the latter, would allow for other exceptions that the framers had not explicitly put in writing. The drafting committee in charge of that issue responded as follows:

“[T]he unilateral use of force or similar coercive measures is not authorized or admitted. The use of arms in legitimate self-defense remains admitted and unimpaired. The use of force, therefore, remains legitimate only to back up the decisions of the Organization [UN] at the start of a controversy or during its solution in the way that the Organization itself ordains” (6 Doc. U.N. Conf. on Int’l Org. 400 (1945)).

In the case of Syria, the Security Council has not authorized force owing to Russia’s veto, nor has the Assad regime attacked another country so as to trigger a self-defense claim against Syria. As such, a military intervention under the present circumstances would manifestly violate the UN Charter. However, Ulbrick et al. argue that “an international law doctrine has evolved to deal with precisely this scenario: the Responsibility to Protect, or R2P.” The authors correctly note that the prevention of war crimes and crimes against humanity, which the Assad regime has undoubtedly committed, “is jus cogens, or fundamental to the international system.” However, their claim that “R2P primarily contemplates the use of force within the UN Security Council’s Chapter VII framework” (emphasis added)— the section of the Charter addressing threats to the peace, breaches of the peace, and acts of aggression—is not correct.

In 2005, the heads of state and government of nearly all countries endorsed R2P, but not the version that Ulbrick et al. advocate. Specifically, the world’s leaders agreed to support the doctrine so long as it is carried out “through the Security Council” and “in accordance with the Charter” (2005 World Summit Outcome, para. 139). Thus, the Security Council has exclusive, and not simply primary, authority to invoke R2P. More broadly, R2P does not deviate from or supplement the UN Charter but strongly reaffirms it.

Admittedly, international law emanates from sources other than the Charter. As Ulbrick et al. rightly point out, that body of law “does not exist in a vacuum. It rests not only on immutable moral principles, but also on the evolving customs and actions of nation-states.” Here, the authors are referring to customary international law, and their conclusion that it prohibits the use of chemical weapons under all circumstances is beyond reproach. However, the authors do not carry their burden of proof that customary international law authorizes the use of force in response to or to prevent a chemical weapons attack in the absence of a Security Council decision. For such authority to exist, the authors would have to point to “extensive and virtually uniform” state practice evincing a sense of legal obligation, to quote the International Court of Justice, the UN’s principal judicial organ. For better or worse, they cannot.

In sum, Ulbrick et al. have put forth a legal case for military intervention in Syria, and this reply has so far confined itself to that aspect. While overwhelming humanitarian and moral concerns may justify an intervention, international law would not. This conclusion, however, should not be construed as a defense of the Assad regime. Nor should it be viewed as an attempt to belittle the suffering of the Syrian people. On the contrary, it is a dispassionate legal analysis that highlights a systemic void in the protection of civilian populations under international law. Save for the most powerful states, the rest are disinclined to support an expansion of the lawful uses of force anytime soon. In the meantime, military intervention in a case like Syria may prove to be legitimate, but it will also be illegal.

Hyder Syed is an alumnus of Case Western Reserve University School of Law, where he was a Hugo Grotius International Law Scholar.