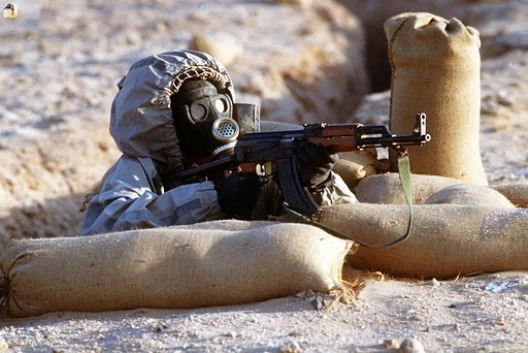 Calls for intervention in Syria have intensified in the wake of the recent sarin gas attack outside Damascus, which killed an estimated 1429 civilians, including 426 children. In response, both the US and France have declared their willingness to use force against the Assad regime. Yet even now, after nearly three years, 100,000 civilians killed, 1.8 million refugees, and the Assad regime’s repeated, deliberate use of conventional and chemical weapons against civilians, there appears to be widespread confusion about whether an intervention in Syria without UN Security Council authorization would be permissible. One commentator argued that any western attack would be an “illegal act of war”; another went so far as to assert that conventions prohibiting the “indiscriminate killing of civilians … don’t mean much unless the Security Council agrees to act.”

Does the Security Council have the last word on whether military intervention to protect Syrian civilians from another chemical weapons (CW) attack is legitimate? As the UK has consistently argued, the answer is, and must be, an emphatic no. Syria has exposed a fundamental structural flaw in the UN’s collective security apparatus, and it is wishful thinking to expect it to act now. To date, Russia has vetoed three separate resolutions aimed at holding the Assad regime accountable, and just this week blocked an effort by the UK on a fourth resolution. More to the point, Russia is openly complicit in the commission of these atrocities as it has bolstered the Assad regime at every turn, with diplomatic protection, advanced weaponry, and financial support. The international community cannot expect Security Council action on Syria as long as Vladimir Putin has a veto.

As we have previously argued here, here, and (more extensively) here, an international law doctrine has evolved to deal with precisely this scenario: the Responsibility to Protect, or R2P. R2P is a norm of international law that provides a means for the international community to prevent mass atrocity crimes occurring within the boundaries of a sovereign state. Although R2P primarily contemplates the use of force within the UN Security Council’s Chapter VII framework, it also recognizes that the prohibition of mass atrocity crimes—genocide, war crimes, and crimes against humanity—is jus cogens, or fundamental to the international system. When the international community has exhausted peaceful options, such as diplomacy and targeted sanctions, and the Security Council is deadlocked, R2P legitimizes the use of force as a last resort to protect civilians from mass atrocities.

Some commentators disagree, worrying that R2P is the international law equivalent of a Trojan horse, cloaking military intervention in a humanitarian guise. These concerns, while understandable, are misguided. Since the humanitarian intervention in Kosovo two decades ago, international law has evolved to find a way to allow the use of force to prevent mass atrocities occurring within the boundaries of a sovereign state in the face of Security Council paralysis.

There is now an international consensus, supported by the jurisprudence of the Rwanda, Yugoslavia, and other war crimes tribunals and codified in the International Criminal Court’s Rome Statute, regarding the elements of mass atrocity crimes providing an objective basis for identifying situations where R2P permits the use of force. Moreover, the commission of and responsibility for mass atrocities can now be more readily evaluated and verified by independent international organizations. For instance, the UN Human Rights Council early on found that the Assad regime has committed “widespread, systematic, and gross human rights violations” including “[i]ndiscriminate and widespread shelling, the regular bombardment of cities, mass killing and the deliberate firing on civilian targets.” Nearly a year and a half ago, in February 2012 a United Nations report concluded the Assad regime had implemented a “state policy” of deliberate attacks against civilians amounting to war crimes and crimes against humanity.

R2P does not provide the US and its allies a blank check to carry out punitive military strikes against Syria; far from it. It only permits such military action proportionate to the relief sought—in this case to protect civilians and prevent further mass atrocity crimes. Military options include aerial or cruise missile strikes targeting, for instance, those Syrian army units that specialize in CW deployment and CW stockpiles (provided that these strikes would likely destroy, rather than disperse, these weapons), SCUD missile batteries, and Assad’s air force, which has repeatedly attacked civilians with helicopter gunships and cluster bombs. R2P could also justify using military force to establish a no-fly zone or humanitarian safe-haven to protect Syrian refugees and minority groups. R2P would not, however, justify so-called “decapitation” strikes against the Syrian leadership, as some commentators have proposed, or other kinetic actions intended to bring about regime change. Strikes against Assad’s command and control apparatus would only be justified if necessary to prevent the regime from deploying CW, or attacking civilians with indiscriminate conventional weapons, such as SCUD missiles.

A US-led R2P intervention in Syria would have important ramifications beyond protecting Syrian civilians against further CW attacks. International law does not exist in a vacuum. It rests not only on immutable moral principles, but also on the evolving customs and actions of nation-states. In this sense, Syria represents a test case, both for the outright prohibition on CW and for R2P. After World War I, where CW killed or wounded millions of combatants, the great powers signed the Geneva Protocol of 1925, banning their use. So strong was the CW taboo that even Adolf Hitler, who himself suffered their effects during the first world war, refused to use them against the allies, despite the tactical advantage they might have conferred. In the post-World War II era, only Saddam Hussein has used CW against civilians (in 1988, Saddam Hussein used Sarin and VX on the Kurdish village of Halabja, killing 5,000 people and injuring 10,000 others). For this crime he was eventually charged by the Iraqi High Tribunal created specifically to prosecute former Iraqi leaders for crimes against humanity.

In Syria, where Assad has now used CW against civilians repeatedly—some 14 times since 2012, according to UK intelligence—this long-standing prohibition is under threat. If the US and its allies act decisively to protect Syrian civilians from further CW attacks, they could both bolster the CW prohibition and strengthen the legal regime which authorizes the targeted use of force to prevent their use. At the same time, inaction would substantially weaken these norms and embolden the Assad regime. Worse, it would signal to other rogue states and non-state actors, that using CW against civilians would result in little more than strong words and finger wagging from the international community so long as they had an ally on the Security Council.

Whether military intervention is prudent or feasible in Syria, particularly in light of the complicated geopolitical elements at play, is a question for policymakers. Still, they should not be deterred by Security Council deadlock. As a former Canadian Foreign Minister explained in a recent op-ed, “member states surely did not intend that urgent humanitarian responses would be hostage to vetoes unreasonably exercised out of self-interest by one or more of the permanent five Council members.” The Security Council plays an important role in maintaining international order, but the international law’s prohibitions against mass atrocity crimes and CW use are equally fundamental. As for those countries who continue to maintain that military intervention without Security Council authorization is prohibited under any circumstances, they must answer for the next Halabja—or Damascus.

J. Trevor Ulbrick is an attorney and consultant specializing in international law and foreign policy, and serves on the Advisory Council of the Public International Law & Policy Group.

Dr. Paul R. Williams is the Rebecca I. Grazier Professor of Law and International Relations at American University, and the co-founder and President of the Public International Law & Policy Group.

Jonathan P. Worboys is a Visiting Tutor at King’s College London and a Legal Adviser at the Public International Law & Policy Group.

Image: A Syrian soldier aims an AK-47 assault rifle from his position in a foxhole during a firepower demonstration, part of Operation Desert Shield. The soldier is wearing a Soviet-made Model ShMS nuclear-biological-chemical warfare masks. (Photo: Wikimedia/CC license)