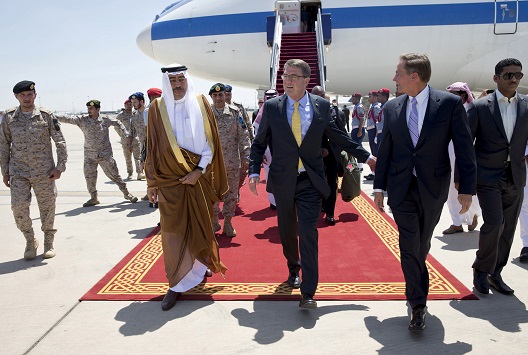 Hours after the conclusion of the Iran nuclear deal, President Barack Obama reiterated the administration’s policy of working with the Gulf Cooperation Council to integrate the region’s disparate missile defense systems. The system aims to defend against Iran’s formidable arsenal of ballistic missiles and encourage the further integration of Gulf Arab military forces. This week, John Kerry is meeting with various Arab officials, in order to reassure the region about the nuclear accord and the United States’ commitment to Gulf Arabs’ defense against the Iranian threat.

During the negotiations, the United States and Iran remained at odds over whether the sanctions on Tehran’s missile program would remain in place. Iran allegedly has worked on a missile reentry vehicle, capable of housing its nuclear weapons design for delivery via the Shahab-3 or Sejjil-2 ballistic missile. In the lengthy annex to the International Atomic Energy Agency’s November 2011 Board Report (and in more indirect ways in other IAEA reports), the agency described how Iran’s weapons related work was conducted under the umbrella of a single bureaucracy, linked to the Iranian Revolutionary Guards Corp, and intended to develop a nuclear weapon.

The Iranian negotiators argued that closing the nuclear file would lead to ending all sanctions—including the ban on conventional weapons imports and the missile related sanctions. The Joint Comprehensive Plan of Action keeps the United Nations Resolution’s restrictions on conventional weapons in place for 5 years and the missile related sanctions for eight years. Iran has the region’s largest stockpile of ballistic missiles and has an active program to increase further the capabilities of its cruise missiles.

While Iran would will still faces export-related challenges after missile-related sanctions are lifted, Washington remains committed to developing an integrated air-and-missile defense system, designed to defeat the Iranian missile threat in the long-term. Qatar, the United Arab Emirates, Saudi Arabia, and Israel have all imported US missile defense systems. The Gulf States, however, remain divided over further integration, owing to concerns over intra-Arab command-and-control issues. This issue remains politically fraught over worries that Saudi Arabia—the largest Gulf Arab state—would gain undue influence in a hypothetical integrated GCC air defense unit, thereby prioritizing its security threat perceptions over that of other Gulf state that may not share the same view.

The more hawkish anti-Iranian states have sought to acquire missile defenses to pair with long-range offensive missile capabilities. The Saudis have imported ballistic missiles from China. The UAE purchased Scud-Bs from North Korea in 1989 and 1999, according to the US government in a Wikileaks document, and the ATACMS short-range ballistic missile from the United States. Both are capable of striking targets inside Iran. Both countries have also purchased the UK/French made Storm Shadow air launched cruise missile for integration on their front line Typhoon and Mirage fighter aircraft. These missile sales were controversial in the United States, owing to their likely violation of the Missile Technology Control Regime (MTCR).

The MTCR is an informal group of thirty-four states that have agreed to adopt national export-control policies that incorporate a common export-control list. Controlled items are divided into two categories. Countries are expected to apply a strong presumption of denial to the export of Category I items—in other words, governments have to make a particularly strong case to acquire them. These restrictions include rockets, missiles, and drones capable of flying more than 300 kilometers while carrying a payload of 500 kilograms. Category II systems are capable of flying at least 300 km with payload weighing less than 500 kg. These limits reflect the MTCR’s original intent: to prevent the spread of nuclear capable delivery systems.

The US conventionally armed cruise missile (and the Chinese development of conventionally armed ballistic missiles) has sparked international interest in procuring conventional missiles for precision strikes. This demand creates an obvious policy problem: to combat Iran’s numerically superior ballistic missile force, the Gulf States have an incentive to acquire cruise missiles for precision strikes and missile defense to intercept missiles in flight. These growing Gulf Arab capabilities will, in turn, incentivize Iran’s building of more missiles to overwhelm and defeat missile defenses, while also allowing Tehran to assert its need for Russia’s S-300 anti-air missile system.

This dynamic is not particularly new and resembles the US-Soviet rivalry during the Cold War. However, in the Middle East, this will unfold below the nuclear threshold at a time when Arab allies are eager to be treated as equal to the United States, rather than junior partners not consulted about major US decisions that affect regional security. This attitude means that in the future it will be harder for the United States to justify the underwriting of the development of Israel’s missile defense system, without providing similar support to its Arab allies.

The United Arab Emirates in particular is eager to deepen its own industrial base, rather than purchase off-the-shelf systems from US suppliers. The drone debate is a perfect example of this. For MTCR related reasons, the United States has resisted the export of unarmed Predators to Gulf Arab states. The primary reason is that a Predator is classified as a Category I system under the MTCR. To address both the geopolitical and economic interests, the US has recently adopted a case-by-case policy for drone exports, and appears likely to allow the sale of the Predator XP—an unarmed system below Category I limits—to the UAE.

The overlap between the technologies needed to manufacture and fly drones resembles that needed for cruise missile guidance. The technology spillover could thus indirectly enable the further development of cruise missiles that fly in excess of MTCR limits, potentially weakening the MTCR and providing a pathway for other countries to justify the sale—or co-development—of a cruise missile with Iran. Russia, for example, is currently working on an MTCR questionable cruise missile design with India and Iran has acquired cruise missiles from China and Ukraine.

These policy problems have no easy answers. In the interim, the United States does have an interest in exporting MTCR compliant Category II systems to its closest allies in the Middle East. The United States already flies drones from at least three air bases in the Gulf, with US personnel reportedly operating in close proximity to their Arab counterparts in every case. The further integration of US and Arab militaries could help to reassure a wary Gulf about the US resolve to confront Iran and aid in Arab defense. The United States should also consider entering into coproduction arrangements with Arab states for Category II systems, albeit with an arrangement where access to guidance technology is limited, or “black-boxed.” This policy could help protect against the spillover problem, while also taking into account Arab demands for help with developing local industry.

This cooperation should not undermine the MTCR. Both the United States and the Gulf States have an incentive to ensure that the strong presumption of denial for the export of Category I systems remains in place and are widely followed. Outside of North Korea, the world’s missile exporters are either members of the MTCR or have adopted national legislation reflective of the common export control limits. The MTCR acts as a critical nonproliferation tool to prevent Iran’s acquisition of complete missiles and associated technologies, even after the expiration of the missile related sanctions in eight years.

The JCPOA is an important agreement with strong inspection mechanisms and gives the United States a strong set of tools to ensure that monitors could readily detect any diversion of nuclear material for non-peaceful use in Iran. The agreement, however, is just one of many tools that the United States relies on to prevent proliferation. In the coming years, the United States must walk a fine line: the strong presumption of denial for exports must remain in place, but the regional security dynamics require greater cooperation on missile development. The United States must continue to manage these conflicting priorities and ensure that it has a longer-term policy to address the proliferation of missiles in the Middle East.

**This article has been update from its original version to reflect the time frame of missle purchases for the United Arab Emirates.