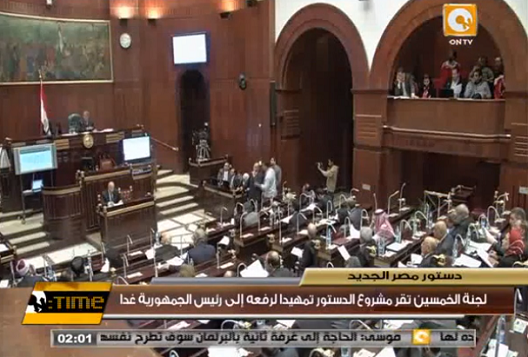 Despite an increasingly volatile security situation and political climate, Egyptians are heading to the polls for the third time in less than three years to cast their votes on a new constitution. Given the state of the country however, the referendum will hardly be an accurate reflection of the text of the constitution itself. However, it is still important to discuss the technical aspects of the draft constitution itself, because – regardless of events surrounding its creation – it will, probably, remain with Egyptians for many years ahead.

A preliminary overview reveals that the draft constitution is by and large a reactive one. Many issues it addresses are reactions to political events that occurred during the one year of former president Mohamed Morsi and the Muslim Brotherhood’s rule. This can be seen in the new draft constitution’s approach for issues like the armed forces, Islamic sharia, and the civil state. The judiciary’s status is also influenced by this reactive position. The conflict between the former president and the judiciary, which was by no means a secret, surfaced numerous times, most notably in the November 2012 constitutional declaration, which represented the most severe confrontation with the judiciary. This conflict did not end with the ouster and detention of Morsi on July 3, but it has affected the new draft constitution, in which the judiciary, and particularly the Supreme Constitutional Court, has been granted special status.

There is no doubt that a number of grave mistakes were committed under Morsi’s reign with regards to judicial institutions, but they do not justify the new draft constitution taking such a step backwards in the articles that relate to the Supreme Constitutional Court. The powers granted to the general assembly of the Supreme Constitutional Court are broad indeed, and in essence establish a tyranny of the court, isolating it entirely from the legislative and executive branches. Furthermore, they contradict the text of the draft constitution itself, as article 5 stipulates that the entire political system is based on the separation and balance between branches of government. Such extensive powers granted to the Constitutional Court are a clear violation to the principle of balance between the government’s branches, which necessitates a certain degree of oversight and review among them.

Perhaps the primary cause for these articles dealing with the Supreme Constitutional Court, and the reactive articles elsewhere in the new draft constitution more broadly, lies in the fact that this document is a direct expression of state institutions’ general stance towards what occurred during Morsi’s reign, and their role during the year he was in power. The problem with such a reactive stance is that it is still representative of the particular moment in which society was overtaken by anger and the desire to overthrow the recent past, and these relations and complexities remain ingrained in the current state of affairs. There is a vast divide between those who support July 3 and those who oppose it, and now is not the most appropriate moment in which to draft a completely new constitution. Those in charge of writing the new constitution should have risen above society’s inflamed emotions, no matter how difficult or impossible this may have seemed, to produce a constitution that was more than a simple reflection of this exceptional and moment in Egypt’s transition and its revolution.

Yussef Auf is a fellow with the Rafik Hariri Center for the Middle East. His work focuses on Egyptian constitutional issues, elections, and judicial matters. He has been a judge in Egypt since 2007.