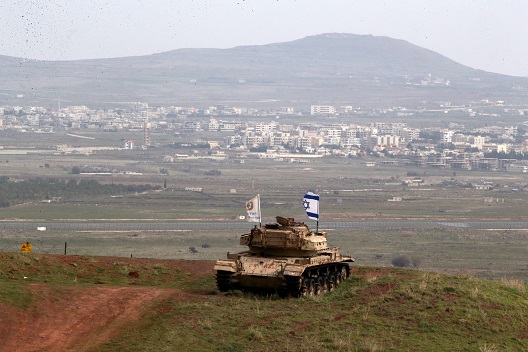 The next Israeli confrontation with its neighbors will be markedly different from its previous encounters. Recent military escalation in Syria that resulted in the downing of an Israeli F16 in February, points to new trends that could shape future conflict between Israel and Iran.

On February 10, an Iranian drone penetrated Israeli airspace from Syria. The Israeli military responded by striking what it described as the command- center from which Iran had launched the drone, at a Syrian air base believed to be located near Palmyra. One of Israel’s F-16 fighter jets that was involved in the military offensive was targeted by heavy Syrian anti-aircraft fire which prompted a broad wave of Israeli strikes against a dozen Syrian and Iranian targets in Syrian territory. According to the New York Times, the Israeli military declared it had targeted eight Syrian targets, including three aerial defense batteries, and four Iranian positions that it described as “part of Iran’s military entrenchment in Syria.”

Unlike previous escalations, this particular one is significant in many ways. First, Iran initiated the drone launch into Israel and this indicates that Tehran is changing its rules of engagement in Syria. Second, given the build-up of Iranian proxies in Syria, the next war will involve not only Hezbollah, but also a variety of Iranian allied militant groups in Syria operating in a single security arc. Third, deep Iranian involvement in Syria points to the direct involvement and leadership of the Islamic Republic of Iran with serious regional implications for future conflict.

The venturing of an Iranian Shahed 114 into Israel is not the first of its kind, and like previous experiences show, it indicates an evolution in the military game. In 2004, Iran’s Lebanese proxy, Hezbollah, sent an Iranian Mirsad on a brief reconnaissance mission over Israel. At least three drones were flown over Israel by Hezbollah in 2006. And in 2012, Hezbollah was able to fly an advanced UAV to southern Israel over a distance of several hundred miles. A source close to Hezbollah fighters believes that the recent face-off between Israel on one side versus Iran, Hezbollah, and Syria on the other; was an ambush staged by Tehran. “The Iranians are fed-up with Israel’s systematic targeting of weapon plants and the destruction of weapon transfers to Hezbollah,” says a source close to Hezbollah fighters who spoke to the author on condition of anonymity. In this context the targeting of Israeli planes could be an Iranian warning to Israel that the rules of engagement are changing and that Tel Aviv should act with caution.

Over the last few years, Iran’s asset build-up in Syria has been significant.  According to Syria expert, Samir Hassan, there are about 34,000 Shia militia fighters in Syria, and “These figures include the Afghani Fatemeyoun, the Pakistani Zainabiyoun, and the Iraqis Haydareyoun.” Iran is believed to oversee pro-regime auxiliary forces such the Local Defense Forces (LDF) which, according to Syria expert Aymen Jawad Tamimi, consist of a variety of local militias such as Katibat al-Nayrab al-Maham al-Khasa, Liwa al-Baqir, Fawj al-Safira, and Fawj Nubl wa al-Zahara. Israel estimates that Iran has control of over 80,000 fighters in Syria, a figure impossible to confirm independently.

These forces appear to fall within an Iran plan to form a continuous security axis including Lebanese, Iraqi, and Syrian military factions. In a recent interview with the author, a Hezbollah sniper explained that Lebanese Hezbollah are no longer alone and that “there is Hezbollah-Syria and Hezbollah-Iraq” not literally, but acting as an “organized entity sharing the same ideology and purpose in the region,” said the fighter. Four days after the downing of the Israeli jet, Akram Kaabi, head of the powerful Iraqi militia Harakat al-Nujaba, pledged to stand alongside its Lebanese ally, Hezbollah, in the event of a new war with Israel. His visit to Lebanon followed that of the head of Iraqi militia Assaib Ahl Haq (AAH), Kais Khazaali, in December and whose statement leaked on the internet which stated his factions’ readiness to stand against Israeli occupation.

These militias have significant resources. On one hand, AAH and Harakat al Nujaba are prominent members of the Iraqi Popular Mobilization Forces (PMF) that now receive about $1.5 billion a year from the Iraqi government, a budget allocated by no other than Abu Mehdi Muhandis, the head of the Kataeb Hezbollah, another pro-Iranian militia. On the other hand, Hezbollah is believed to have an arsenal of over 150,000 rockets, according to Israeli army estimates. In a previous interview General Amine Hoteit, underlined that the militant group had a deployment capability of at least 20,000 full-time fighters and over 20,000 reservists. Both Hezbollah and pro-Iran PMF fighters have acquired significant military capabilities in Iraq and Syria fighting against the Islamic State and the Syrian opposition.

Tehran also has at least 3,000 fighters in Syria who generally act as advisors. The BBC reported last year that the Islamic Republic had established a permanent military base inside Syria. The Iranian military was believed to have established a compound used by the Syrian army outside El-Kiswah, in Damascus countryside, south of the city; a region targeted by Israel several times in the last year. Israel has also acknowledged striking Syria over a hundred times with much of its military effort focused on pro-Iranian interests such as weapon production plants, bases, military hangars, and weapon convoys to Lebanon.

A Hezbollah source previously told the author that the organization has acquired precision-guided weapons through Syria, and Hezbollah fighters have acknowledged in numerous interviews that much of the “resistance” military effort was led by a “joint military operation rooms including Russians and Iranians.” However, Iran has always avoided confronting Israel directly, using proxies as effective pressure points in the regional game. A case in point is the 2006 Hezbollah conflict with Israel that lasted thirty-three days, which cost Lebanon $5 billion, resulted in the death of 1,200 people killed, and displaced nearly a million people. Yet Iran’s heavy involvement in Syria means that any future conflict against Israel that involves its proxies there will also mean some level of leadership by Iran.

These trends account for slow, but continuously changing dynamics in the Israel-Iran confrontation in Syria. While a war between the two protagonists in Syria may not be in their immediate plans, the fact that Iran will continue to fortify its position in Syria and that Israel will continue its crackdown on an expansion that it perceives as an immediate threat; show that the balance of deterrence is slowly eroding.

Image: An old military vehicle can be seen positioned on the Israeli side of the border with Syria, near the Druze village of Majdal Shams in the Israeli-occupied Golan Heights, Israel February 11, 2018. REUTERS/Ammar Awad