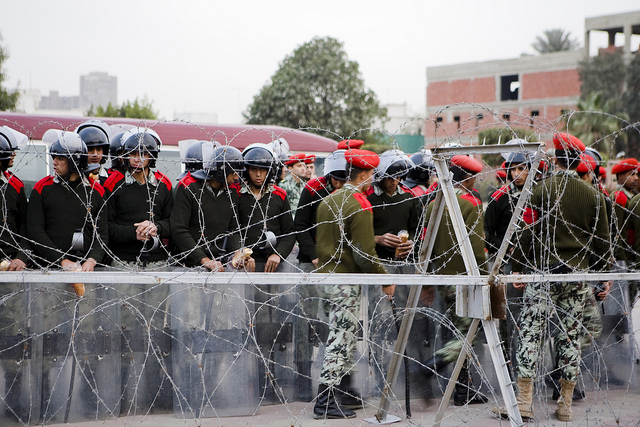 The laws governing House of Representatives elections and political participation, submitted to the Supreme Constitutional Court (SCC) in April, have once again been met with the court’s disapproval. The court ruling puts an already delayed timeline for parliamentary elections further off track, while contradictory statements emerge from the Shura Council on how next to proceed. Several of the articles addressed by this week’s ruling were among those included in the SCC’s February ruling, with the amendments made by the Shura Council deemed unsatisfactory by the court. The SCC’s ruling, however, has uncovered yet another issue for Egypt to deal with at a time when political polarization is at its worst – military and police voting.

The court decision that gained the most attention deemed the ban on police and military voting in the political participation law unconstitutional. The SCC’s ruling drew criticism from across the political spectrum. Members of the Muslim Brotherhood’s Freedom and Justice Party (FJP), the National Salvation Front (NSF), the Islamist Wasat Party, the April 6 Movement, and even recently appointed Minister of Parliamentary Affairs, Hatem Bagato, voiced concern over the court’s decision, saying it could lead to the polarization of the institution due to partisan politics. The Islamist Watan Party also rejected the SCC’s decision, but called on Morsi to put the issue to a public referendum. At the same time, members of the liberal Free Egyptians Party and the Egyptian Social Democratic Party welcomed the ruling, saying that members of the military and police should enjoy the same rights as other citizens, as per the Islamist-drafted constitution.

This is not the first time the subject of military and police voting has been broached in recent years. In May 2011, under SCAF’s watch, the Egyptian cabinet, led by then-Prime Minister Essam Sharaf, announced amendments to the political participation law, allowing members of the police and the military to participate in elections. General Mamdouh Shahin, a military and legal affairs official and a leading SCAF member, however, denied the news, citing a conflict of interest as the reason this amendment could not be implemented. “How can they participate in elections and secure them at the same time?” he asked.

Elsewhere in the world, however, military voting is by no means out of the ordinary. Kuwait, Libya, Paraguay, Tunisia and Brazil, where military personnel below the rank of sergeant cannot vote, are among the only nations that prohibit military voting. Oman also prohibits military voting, unless one year has passed since retirement. In Egypt, the law prohibiting military and police voting has been in place since 1923. It saw a brief reprieve in 1956 but left soldiers “preoccupied with political affairs,” according to Adel Morsi, a retired military general, former head of Egypt’s military judiciary and a current member of the Shura Council.

First, introducing voting within the barracks and police force by extension introduces the same kind of political polarization dividing ordinary citizens. In light of Egypt’s current security situation, particularly in Sinai, a polarized security force simply could not operate effectively as a unit. A small but significant example of Islamist-Secular polarization within police ranks already exists in the form of ongoing protests by bearded police officers. Second, with a monolithic and opaque organization like the Ministry of Interior, the loyalties of this organization are not clear. Would high-ranking officers guide the votes of low-ranking officers? We can only speculate, but previous instances of vote rigging and voter intimidation in the 2010 parliamentary elections together with the lack of security sector reform suggest that the problems of the Mubarak era might carry over into the next elections. Allowing a significant bloc to take to the ballot box, could easily sway the vote. While there are no public figures on the actual size of the military and police forces, a 2009 estimate placed the size of the police force alone, with all its various departments, at 1.7 million (850,000 policemen and interior ministry staff; 450,000 Central Security Force troops; and 400,000 secret police). Lastly, due to the lack of trust in the police force and the military, their participation threatens the public perception of free and fair elections that could impose a legitimacy crisis on the new parliament.

Additionally, the law makes no effort to prevent partisan behavior. To avoid the criticisms made of the judiciary, the military and the police desperately need to appear apolitical. Former Supreme Constitutional Court Judge, Tahany al-Gebali came under harsh criticism for recently announcing how she voted during presidential elections, and the same could be said of military or police leaders. The new privilege allowing security forces to vote also reveals a conflict of interest, as Mamdouh Shahin said in 2011, if members of the police and military charged with securing polling stations are given the chance to vote. Minister of Defense Abdel Fattah al-Sisi’s vague comments on the SCC ruling, saying that the Armed Forces would not be politicized and would remain an independent institution, neither welcomed nor rejected the opportunity to vote. However, the inner-workings of the Ministry of Interior and Ministry of Defense are anything but transparent, and with no laws guiding the sudden change, the SCC’s ruling is troublesome.

The elections law has seen several delays in the past few months. Members of the opposition have accused the Brotherhood of continuing to intentionally delay the elections law in an attempt to buy time to bolster the organization’s waning popularity, and prolong the Islamist-dominated Shura Council’s legislative power. The FJP itself, however, has issued similar statements accusing the SCC instead of delaying elections, as well as attempting to drag Egypt’s armed forces into “political conflict.” The SCC’s introduction of a new facet to the debate over political participation, however, certainly lends support to the FJP argument.

To avoid further delays, talk of a military and police vote should be tabled, while the more pressing concerns within the elections and political participation laws (district divisions, voting abroad, a ban on religious slogans etc.) are addressed. Between a failing economy, political polarization, and struggle over the judiciary, a politicized military or police force is one more ingredient in a recipe for disaster that Egypt can do without.