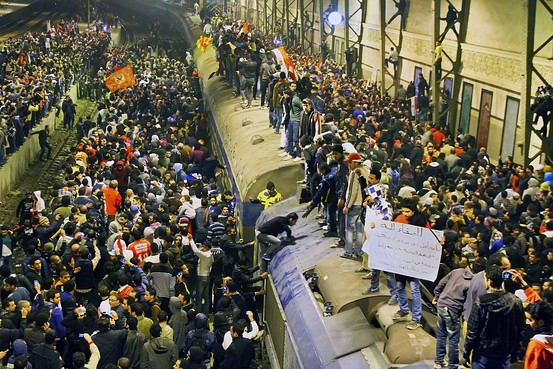 Yesterday’s match between Port Said’s Al-Masry soccer team and its Cairene rival Al-Ahly mutated into a brutal scene that claimed the lives of 74 Egyptians and wounded scores more, according to the Ministry of Health. Many questions surround the factors that provoked the worst outbreak of soccer violence in Egypt’s history and across the spectrum of political and social forces – elected officials, Islamists, liberals, and youth activists – Egyptians are pointing their fingers directly at the police and Ministry of Interior. On February 2, the People’s Assembly called an emergency session over the incident as the bodies of the deceased were transported by train back to Cairo into the arms of devastated friends and family members. This tragic incident shines a glaring spotlight on the lack of security sector reform since the fall of Mubarak and raises important questions regarding the legal authority of the newly elected parliament to hold the current government accountable for the deadly riot and dismiss public officials for negligence.

Many of Ahly’s Ultras – the term used for hardcore supporters of the Egyptian soccer league teams – suffered the most casualties but victims also included Port Said Ultras and ordinary supporters, as well as one police officer. Tragically, Egyptians have not witnessed casualties of this scale since the “Battle of the Camel” exactly one year ago when Mubarak unleashed mercenaries onto demonstrators in Tahrir. In looking at the video clips from the match, questions remain over whether the primary catalyst for the violence was athletic rivalry or political tensions. Although clashes between rival Ultras groups are not unheard of, the degree of violence and police unwillingness to stop it has led some to claim that the fans were set up for their support and participation in the ongoing revolution’s protests.

Although the Ministry of Health claims that asphyxiation caused the majority of fatalities, likely due to stampeding, a close look at some of the scenes of the match reveals a distinct lack of security personnel normally present during such events. Another abnormal and troubling observation was the conspicuous absence of any police action to control fans as they began raiding the playing field. The Egyptian Initiative for Personal Rights interviewed Mohamed Said Muslah, an Ahly fan who attended the match and witnessed the chaos. He noted a distinct lack of security throughout the match that allowed attendees to roam the stadium unimpeded. Instigators tried to rile up the fans against each other, hurling insults and fireworks before storming the field at the end of the game. The lights of the stadium inexplicably went out shortly afterwards.

On the day after the deadly riot, thousands have returned to the streets of Tahrir to protest police inaction and show solidarity with the Ultras, a group that has supported revolutionaries throughout their struggles against police brutality. News reports and Twitter feeds from various activists indicate that hundreds currently stand before the Ministry of Interior headquarters after demonstrators dismantled the concrete barrier preventing access to the ministry. Clashes between the protesters and security forces have broken out within the past few hours as tear gas and wounded pour out of Bab Al-Louq Street in Cairo’s downtown district.Political forces in the People’s Assembly clearly believe the incident reflects a lack of control and leadership by the Supreme Council of the Armed Forces (SCAF) and the cabinet. MP Amr Hamzawy, a secular independent, stated in the emergency session of the People’s Assembly that the violence witnessed in Port Said is a “continuation of events since Feb 11 … the continuation of a political crisis, the reason for which is the lack of legitimacy of the Supreme Council of the Armed Forces.”

Sayed al-Badawi, the head of the liberal Wafd Party, went a step further, issuing a statement calling for a vote of no confidence in Prime Minister Kamal Ganzouri’s government. But does the newly elected People’s Assembly have the legal authority to restructure a cabinet appointed by the SCAF? Clearly, MPs are asserting their right to do so, but it remains to be seen whether the SCAF will accept the parliament’s encroachment on the power of appointment and dismissal, which had been the SCAF’s exclusive prerogative prior to the first session of the newly elected parliament. Other MPs have echoed al-Badawi’s call: The Youth and National Secuirty Committees blamed the interior ministry for the security failure, demanding his dismissal and that of Egypt’s public prosecutor. Several MPs also demanded the dismissal of the interior minister and a major overhaul of the interior ministry itself. Last week, the People’s Assembly asserted that parliament now wields exclusive authority to introduce new legislation and that the days of rule by military decree are over. According to FJP MP Mohamed al-Beltagy, “The parliament has become the only and unchallenged legislative authority.” But does parliament’s assumption of legislative powers also imply the authority to dismiss and appoint a new government?

The SCAF had previously rejected the idea of a civilian “national salvation” government appointed by parliament in recent months but mounting pressures from both the People’s Assembly and street action as a direct result of the Port Said incident may prove too great to dismiss. Some Freedom and Justice Party (FJP) parliamentarians have already voiced support for the measure, indicating a possible break from the Muslim Brotherhood-endorsed SCAF timeline. Legal recourse to replace the government and remove the SCAF seems unclear at this time but the political fallout may now trump any procedural hurdles – particularly in such a vague legal climate – as public opinion and the Islamists shy away from support for the current system.