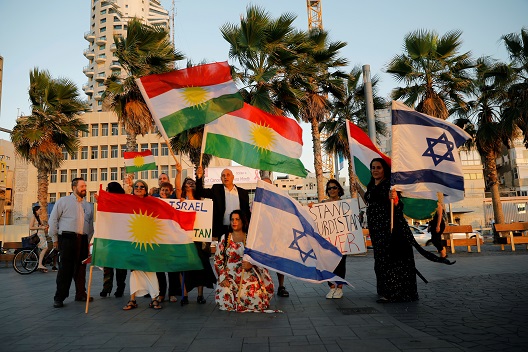 With the Iraqi flag now flying above Kirkurk’s oil fields, a major pivot in the Kurdish-Israeli relationship threatens to isolate the KRG from its limited alliance system. In just four days, the Kurdish Regional Government (KRG) lost nearly all territory gained by Kurdish Peshmerga 2014 forces against the Islamic State of Iraq and Syria (ISIS) and the 2003 American intervention to Iraqi federal forces. Iraqi Kurdistan has now retreated to the national borders it occupied before the 1991 Kurdish uprising, and faces damage to its political and economic institutions that will take years to recover. Whether Kurdish President Barzani designed the referendum as a true bid for secession or a tactic to amass political autonomy, the referendum was a gamble that fell flat, jeopardizing the KRG’s posture in the global oil market and strategic regional partnerships.
As Iraq’s government moves in on disputed territories, Kurdistan’s footprint in the global oil market will continue to wane as the Kurdish government is left with just one oil field in Kirkurk: Khurmala, which produces less than 105,000 barrels per day. Absent any deal with Iraq to share these assets, nine billion barrels of Kirkuk’s crude and billions in future export earnings have been erased from Kurdistan’s national economy. As for Israel—unrecognized by the Iraqi government—private firms may lose 3.8 million worth of deliveries, and will likely absorb sunk costs and turn to an  existing relationship with Russia that has constituted a majority of their oil trade second to Kurdish imports, despite heavier costs and import taxation.

When Iraqi Kurds took to the polls to vote in the September 25th independence referendum, a number of Israeli flags were hoisted alongside the Kurdish national flag in the streets of Erbil. While Kurdistan went against the odds and urges of the United States, Turkey, Iran, Iraq, and the European Union, it was Israel that remained in Barzani’s corner. Prime Minister Benjamin Netanyahu was not just the only stateman to publicly back the independence referendum, but to additionally endorse a vote in favor of  Kurdish secession from Iraq’s federal government. Israel, through political gambles and its close oil commercial relationship, was Kurdistan’s most public risk-taker.

The Kurdish and Israeli governments share a long-winded and peculiar relationship, dating back to the eighth century when Kurdistan was home to the Jewish Benjamin tribe. Today, over 200,000 Jewish-Kurds have resettled in modern-day Israel after the ‘Farhud’ violence under the Hussein regime, and have carved out strong pro-Kurdish sentiment in the Israeli political sphere. In the mid-1960’s, Israel joined the Iraqi Kurds in opposing the Algiers Accord in Iraq, and sent units to train and arm Kurdish Peshmerga fighters. Israeli politicians and cabinet members have slated Iraqi Kurdistan as a mirror image of a pre-1948 Israel—championing self-determination and paralleling both states’ non-Arab identity—and saw Kurdistan’s friendship in line with Israel’s “alliance of the periphery” foreign policy agenda. Especially after a successful campaign against the Islamic State of Iraq and Syria, Iraqi Kurdistan appeared the ideal destination for Israel to stave off Iran’s growing ‘Shia crescent’ and fragment centralized Arab efforts.

When many private firms saw risk in dealing with the KRG, Israel’s private sector saw opportunity. Since 2014, the KRG has pursued an independent oil market that defied the Iraqi federal government’s budgetary demands, selling a blend of crude to trading intermediaries who then sold to private firms in over ten countries. The KRG’s agents used ship-to-ship transfers, with shippers often turning off internationally mandated transponders to mask the end destination of cargoes, under the shadow of legal threats from Iraq’s Ministry of Oil . A variety of pre-paid deals with traders provided a ready and increasingly regular cashflow to the KRG, though oil price and delivery volatility has meant the KRG now has an extensive backlog to repay. Israeli refiners were one of the first clients to take the risk of engaging with crude from Iraqi Kurdistan, and soon became the KRG’s top-buyer receiving just under an average of 300,000 barrels of waterborne, medium-grade crude per day. Kurdish crude exports satisfied an 77% of Israeli demand—over three-fourths of the state’s imports—the majority of which has been produced in Kurdistan’s formerly-controlled  Kirkuk oil fields, which produced  an average of 455,000 barrels per day. Israeli firms have not only served as Kurdistan’s most prized clients, but the state has offered the KRG’s Ministry of Natural Resources a key avenue to accessing the global oil market. The Israeli port in Ashkelon has allowed the KRG to transfer barrels ship-to-ship, undetected by radar satellite sensors, when the KRG first began direct engagement with the global market. Israel’s de facto, intermediary status has enabled a semi-autonomous, landlocked Kurdish government to match the production outputs of some  of the market’s most valuable traders, such as OPEC members Ecuador, Qatar, and Nigeria, and attain the rank of tenth in the world for petrol reserves.

With Iraq’s re-seizure of the disputed Kirkuk region comes a new era in the Kurdish-Israeli relationship. The international community has already seen a shift in Israeli behavior, with Netanyahu instructing governmental officials to keep mum on the referendum results and restricting any official reaction to Iraq’s seizure of Kirkuk that could signal national support. As Israel’s private sector adjusts to compensate Kurdish crude exports, Netanyahu’s government may realize that support for a politically fragmented, economically crippled KRG is empty-posturing and risks antagonization with Iran, Turkey, and Iraq—and thus retract much of its public support and rhetorical grandstanding.

Caroline Rose is an intern at the Rafik Hariri Center for the Middle East at the Atlantic Council.