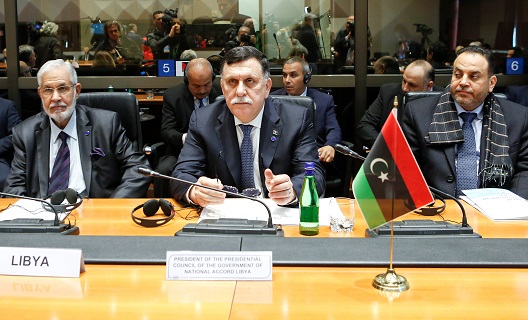 Photo: Faiez Mustafa Serraj, President of the Presidency Council of the Government of National Accord of Libya (C) sits next to Libya's Foreign Minister Mohamed Taha Siala (L) and Interior Minister Al-Aref Al-Khoja during a meeting in Rome, Italy March 20, 2017. REUTERS/Remo Casilli

Libya today is close to being considered a failed state. The political system is stalled and authority is divided between an internationally recognized government, the Presidential Council and Government of National Accord (PC/GNA) in Tripoli and the House of Representatives (HoR) in Tobruk. Power is fragmented among myriad militias and armed groups, each one controlling limited territory. The internationally recognized government in Tripoli is unable to extend its authority beyond its immediate compound, while the HoR’s authority is limited under the influence of eastern strongman Khalifa Haftar and his Libyan National Army (LNA). So far, all attempts have failed to reach an agreement at a national level between the major factions despite efforts by UN-led international mediation efforts.

It is evident that the top-down approach is not solving Libya’s political stalemate. A new approach is required that recognizes the need for local authorities—city councils and municipalities—to play a major role. This does not mean establishing federalism in Libya, which is not a viable solution, but rather advocating for the transfer of selected powers and responsibilities from the center to the periphery. Successful outcomes are more likely to be achieved by using both the top-down and bottom-up approaches. Decentralization and the empowerment of local authorities must be set within the framework of state building and national reconstruction. For this to occur, it is important to understand the current state of decentralization in Libya and from there design a potential roadmap for its implementation.

The legal framework for decentralization consists mainly of Law 59 (2012), which established over ninety-nine municipalities made up of elected municipal councils spread across all three regions of the country. The municipalities are further divided into wards, which do not have any sort of governance structure. The legal framework of Law 59 is weak and does not specifically delegate duties or rights to municipalities. Under Law 59, most basic services—education, finance, housing, water, sewage, electricity, etc—fall under the purview of state agencies. Moreover, municipalities are not mandated to collect taxes. Their sole source of income is transfers from the central government that are only meant to cover operating costs.

No nationally-adopted vision for local governance exists in Libya. The effectiveness of local authorities varies; some municipalities efficiently administer primary services and control of their territory even within a foggy legal framework, while others remain inept or paralyzed by underfunding. Despite the high levels of activity of some municipal councils, their efforts are hindered by a lack of substantial funding from the central government. Moreover, tribes and militias prevent the positive functioning of some municipal councils by creating alternative power centers that tend to dominate local politics.

There are signs that the Libyan population is ready for a much-promised transfer of power away from the center out to local authorities. A survey by the International Republican Institute in 2016 found that fifty-five percent of Libyans believe their municipal council is legitimate either “a great deal” or “a fair amount.” Moreover, thirty-three percent of Libyans believe that municipal councils are the most legitimate actors representing constituents, more than tribal leaders or parliamentarians. While awareness of municipal council activities is low at four to twenty-one percent, voter participation in municipal elections is between twenty-one to fifty-two percent. It is also noteworthy that some municipal councils have asked for international assistance. Municipalities such as Bayda have received direct assistance from the State Department’s US Middle East Partnership Initiative and international and local implementing partners. Some local councils rely on online communication through Facebook to connect with their constituents and boost transparency.

Still, the lack of financial resources and a clear legal framework is impeding the delivery of services at the local level, thus creating some discontent among the population. Up to forty-two percent of Libyans are not at all satisfied with the quality of services that municipalities provide. There is little interaction between the national government and the municipalities, as the PC/GNA lacks the authority to regulate the relationship between the state and the local authorities. In addition, municipal councils lack expertise and technical competence following years of institutional insignificance under the Qaddafi regime.

The limited process of decentralization today in Libya is not working. Since the only responsibilities that are decentralized are in areas including building licensing, public health, local development, and civil registration, local councils do not have much full authority to respond to a broad range of citizens’ needs. Much more needs to be decentralized, including critical services for the population such as water, electricity, sewage, and education. Local policing should be decentralized to local authorities and be coordinated with the formation of a strong central national security force.

Contrary to many opinions regarding decentralization, oil should not be decentralized. In Iraq, to decrease conflict over oil, the central Iraqi government collects oil revenues and redistributes it to local governorates based on population size. It pays oil-producing regions a certain amount per barrel. The constitution in Iraq stipulates that the country’s oil is owned equally by all citizens. By overseeing the collection of revenues from oil sales and their allocation to local governments, the central government in Libya can address the unequal distribution of oil installations in the country. The Central Bank of Libya and the National Oil Company could act as the central authorities to oversee and execute this distribution.

Local governance is more reliable in providing services that respond to citizens’ needs, and it is evident that a legal framework is necessary that allows municipalities to collect taxes and provide services over which the central government currently has a mandate. A recent project by Chemonics in Iraq showed that strengthening sub-national government institutions and training municipal councils in service delivery is the most important avenue to defuse conflict among the population and build legitimacy for the state.

The Libyan case undoubtedly presents numerous challenges for the realization of a bottom-up governance approach. The primary question is whether it is possible to begin a decentralization process before a full political settlement is reached to solve the country’s current conflict. Libya lacks a constitution in which duties and responsibilities are clearly expressed, and the Libyan Political Agreement signed in Skhirat in December 2015 is not at all clear on this point. Nevertheless, the PC/GNA, as the internationally recognized government, could bypass the constitutional issue by issuing a law by decree to delineate an implementation plan for the decentralization process. This executive order could then be ratified, rejected, or modified by an eventual legitimately-elected parliament.

Other challenges include the patronage system that allowes the population to rely on the distribution of funds and subsidies by the central government. Moreover, in Libya the central government is historically weak and unable to collect taxes. The question of how to teach and empower local authorities to do what the government has been unable to do will constitute a major challenge. Another thorny issue is that of devising a new plan for the fair distribution of oil and government revenues. Non-oil producing areas need economic development assistance and is another potential issue of conflict.

In order to accomplish effective decentralization and redistribution of power, duty, and responsibilities, Libya needs a strong central government capable of exercising the powers that it is ready to devolve. Therefore, it is clear that to begin to resolve the Libyan crisis, the United Nations and the international community should support a negotiation process that simultaneously includes both top-down and bottom-up approaches.