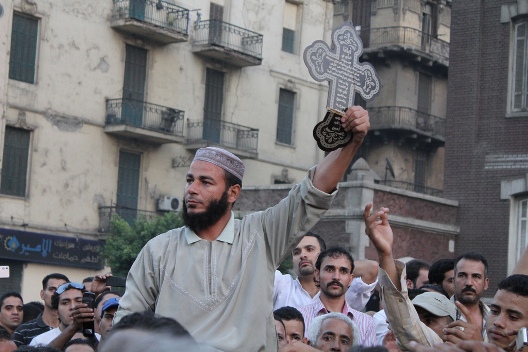 Coptic Christians have reason to celebrate… alone. While they and many others rejoice at the removal of the overall Islamist tinge of the 2012 constitution, this largely liberal-produced draft leaves other religious minorities out in the cold.

“One of the main concerns we have is that freedom of religion is limited to the heavenly religions,” said Chris Chapman, noting the non-recognition of Egyptian Baha’is in particular. “Freedom of religion is absolute and there should be no exclusion.” Chapman is the head of conflict prevention at Minority Rights Group (MRG), a London based advocacy NGO. Drawing on 40 years of experience in over 60 countries, he is visiting Cairo to present the findings of a study describing how minorities have borne the brunt of Egypt’s instability.

Entitled ‘No Change in Sight,’ the study details the difficulties of Coptic Christians, Shia and Sufi Muslims, Ahmadis, Quranists, Jews, and Baha’is. Drawing on the testimony of activists in each community, the report blamed discriminatory legislation, exclusionary nationalism, and extreme Islamism as the source of most of their challenges. MRG called on the government to “Promote an inclusive and rights-based concept of Egyptian citizenship, based on equality and nondiscrimination,” along with eight other reasonable recommendations, according to the human rights charters Egypt has signed.

All this is well and good, but why has it not happened already? After all, the current constitutional draft was written primarily by liberals. “When Morsi was overthrown it didn’t necessarily signify a massive shift to a very liberal agenda in terms of the whole panoply of human rights,” Chapman said. “It is a horrendously difficult process and you won’t get from A to B just like that.”

In fact, many of the activists MRG interviewed – primarily in the period before Morsi’s removal – advised the group to leave unmentioned a few controversial provisions. “Our position should be to measure against the top standard,” Chapman explained concerning the report’s call against a blanket ban on blasphemy. “But some people said, ‘You can’t say that, you’re so far off the mark with where Egypt is right now.’” But then, with the fall of Morsi things changed.

Chapman admitted the need to strike a balance between what is possible and what is required by international human rights law. “There’s a difference between what we can say and what they can say,” he agreed. “It may not be possible right now, but we have to say this should be the case.” Even so, upon their advice a statement insisting on the right of all Egyptians to convert to the religion of their choice was left out of the report.

But removing the religion field from the national ID card was not. One of MRG’s recommendations was that religious figures lead the charge so that minorities would not suffer discrimination in access to service and resources. Chapman says the language here was couched very carefully, but he struggled to find examples of where similar initiatives had worked elsewhere. In Iraq, one of their activists put a petition online, but it has received very little support.

Iraq, however, provides a more encouraging example in a different sector. The United States Institute of Peace is engaging the Ministry of Education to rewrite the presentation of minorities in the national curriculum. Chapman also mentioned the example of Macedonia, where Europe’s High Commission on National Minorities helped establish an Albanian language university after the war.

But these examples only serve to highlight the role of the international community working with elites to support minority concerns. Chapman criticized the process of drafting Egypt’s constitution for being an elite-led document, wondering if it could rightly be called a document of the Egyptian people.

But international pressure on elites works, especially if through NGOs and regional associations such as the African Union. Chapman prefers domestic initiative, but the elites are the decision makers and must be addressed in cooperation. “Domestic activists tell us they will listen to you more than they listen to us,” he stated, “so we often go together.”

But Chapman’s report issued nine recommendations to the government, and only one to civil society. NGOs have an important role to play in grassroots transformation, but oftentimes the reform of law must come first. He mentioned a theory which posits it is necessary to work at the elite level, “because they are more likely to make compromises in the interest of making the political system work.” Wishing to be a part of the system, elites can then sell these compromises back to their more demanding base.

The presence of elite Salafis in the constitutional process is one reason Chapman mentioned that more rights were not secured. But engagement is necessary. Instead of fearing the resistance of conservative groups, “You might find out they are actually less worried about it than you thought in the first place.” Though Salafis lobbied hard for their perspective, they did eventually agree to the constitutional text.

If this constitution, however, does not fully satisfy liberal activists, a long term focus is necessary to transform a repressive environment to one respectful of human rights. “It happens gradually,” Chapman assured, “as a process of consultation and negotiation. I see Egypt as moving in the right direction, but it hasn’t got there 100 percent yet.”

Until it does, Chapman has the advantage of calling from the outside for both the rule of law and proper legislation. He urges activists and citizens alike to lobby for the rights of Copts, Baha’is, Shia, and others, but the ultimate onus falls on the government.

“This is international human rights law,” Chapman said. “If Egypt is going to live up to its obligations it must respect freedom of religion and belief.”