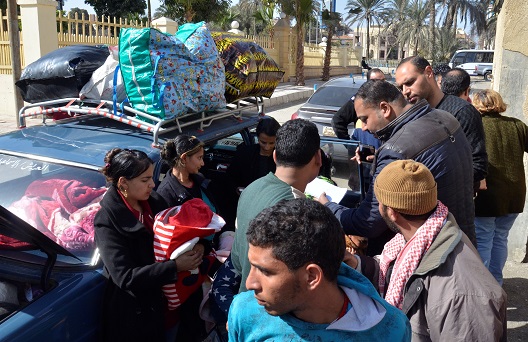 After a more than four-year absence, Jund al-Islam (JAI) has returned to the forefront in Sinai, marking a new chapter in the fierce conflict between al-Qaeda and the Islamic State (Daesh, ISIL, ISIS). The group published an audio recording in which it took credit for an attack targeting ISIS affiliates in Sinai known as Wilayat Sinai (WS). Jund al-Islam deemed them Kharitjites or those that defected from the group, and demanded that WS leaders turn themselves in. This attack raises many questions related to the sudden timing of Jund al-Islam’s emergence, its relationship with al-Qaeda, and the likely impact of the renewal of old hostilities between Wilayat Sinai and Jund al-Islam.

Contrary to some reports, Jund al-Islam formed following the ousting of former President Hosni Mubarak in February 2011. After the fall of the Qaddafi regime, JAI took advantage of the lack of security in Libya to train, recruit, and accumulate weapons there. Unlike Ansar Beit al-Maqdis (ABM), a group loyal to Wilayat Sinai that had carried out attacks on Egyptian gas pipelines on multiple occasions, JAI did not broadcast itself. Instead, the name “Jund al-Islam” appeared for the first time on September 12, 2013, when it claimed responsibility for the bombing of the Rafah Military Intelligence building and promised to publish details of the attack in a subsequent video message. The announcement marked a historic shift in the discourse of Salafi-jihadist organizations in Sinai, whose activities had, until that time, been limited to attacks against Israeli tourism, Sinai’s gas pipelines, or targets inside Israel.

With just a single operation to its name, Jund al-Islam became absent from the battlefield because of ABM’s targeting of JAI fighters and confiscation of JAI weapons. After forced arbitration through an ISIS-affiliated Sharia court, JAI was forced to disband when the court ruled that the group should be broken up for its refusal to pledge allegiance to Abu Bakr al-Baghdadi and fight under the black flag of ISIS. The confrontation reached its peak in 2016 when Wilayat Sinai detained elements of JAI, including several leading members of the group.

Because of these circumstances, JAI did not release any video of the attack targeting the Rafah Military Intelligence building until August 12, 2015. In doing so, JAI had an opportunity to underscore the distinction, as well as the ideological differences, between itself and Wilayat Sinai, which pledged allegiance to ISIS in 2014. In the video, JAI included clips of Ayman al-Zawahiri, a clear indication of its loyalty to al-Qaeda, which would only be strengthened by the group’s second attack.

On October 29, 2015, Jund al-Islam released a second video in which it confirmed its affinity for al-Qaeda by using an excerpt of an audio recording of former Egyptian military officer and current Emir of Jamaat al-Murabiteen, Hisham Ashmawi, a foremost icon of al-Qaeda in Egypt. Here, it is important to note that the ideological and moral ties linking JAI and al-Qaeda have not yet been proven to extend to the organizational level, remaining limited to tributes to al-Qaeda figures.

JAI went back into hiding for two years before returning to the limelight once more on October 29, 2017 with a statement supporting the initiative of some Salafist thinkers calling for reconciliation between certain Salafist groups in Syria. Most recently, JAI released an audio recording on November 11 entitled, “Adopting a security operation to fight Baghdadi’s Kharijites in the Sinai,” which announced targeting WS members. The statement was brief and did not explicitly lay out JAI’s strategy for dealing with the army or ISIS. It is expected that JAI will issue a follow-up statement in the near future, outlining its strategy and the parameters of its approach.

JAI’s latest statement included several important points. The first is its description of WS members as “Baghdadi’s Kharijites” and confirmation of its preparedness to fight them. The second is that the person making the statement spoke with an accent that was distinctly not Bedouin, an indication of JAI membership expanded to outside of Sinai. JAI also described the Egyptian Army as an “apostate” army, confirming its intentions to carry out attacks against the army in Sinai, or that it already did without announcing it in order to refrain from drawing the ire of WS. The third point worth noting is the emotional rhetoric used when talking about the people of Sinai, describing them as “family” in an attempt to garner civilian sentiment. Using emotional rhetoric aimed at the people of Sinai, JAI described people of Sinai as “family” and addressed a number of mistakes made by the Egyptian Army in an attempt to avoid repeating Wilayat Sinai’s errors, which cost them the sympathy of the local people. This rhetoric serves to build up an incubator community that was lost by WS as a result of its hostile actions against civilians, reminding them that ISIS violated the rights of the innocent and blockaded Muslims in Gaza in an effort to solicit the support of the Gaza-based Salafi-jihadist movement.

The re-emergence of Jund al-Islam at this time is due to several factors, namely the changing balance of power resulting from Wilayat Sinai’s weakened state compared to the organization’s strength in 2015-2016. This is due to cooperation between Egypt and Hamas to secure Sinai’s borders and to huge losses suffered by WS after several successive operations carried out by the Egyptian Army targeting the group. However, the most significant reason for WS’s weakened state is the decline of ISIS in Syria and Iraq and the loss of most of its territory there, which has impacted the funding and logistic capabilities of its affiliate in Sinai. Consequently, the timing was right for JAI to once again appear on the scene in Sinai, something the group would not have dared do just two years ago because of the strength and demeanor of Wilayat Sinai.

This comes after al-Qaeda’s forceful return to Africa on March 2, 2017 in the Sahel and Western Sahara in particular after it was able to unite the Sahara Emirate of al-Qaeda in the Islamic Maghreb (AQIM), al-Murabitoun, Ansar al-Dine, and the Macina Liberation Front in a single alliance called Jama’at Nasr al-Islam wal-Muslimeen, or Group to Support Islam and Muslims (GSIM),  led by Iyad Ghali. This announcement implies the return of al-Qaeda’s original organization, albeit within separate strategic groups. It can also be viewed as the ongoing competition between al-Qaeda and the Islamic State, which is looking to Africa as a stopgap in light of the group’s territorial losses in the Middle East.

It would appear that al-Qaeda’s strategy is centered around strengthening and arming its local affiliates, incorporating new partners, and filling the vacuum left by ISIS. According to statements made in January 2017 by Abu Hisham Abu Akram, a member of al-Qaeda in the Islamic Maghreb’s Shura Council, “ISIS in Algeria is finished, both in name and composition.” Al-Qaeda appears to have achieved remarkable success in this regard. Despite the pressures exerted on the group over the last sixteen years since the 2001 September 11th attacks, al-Qaeda has managed to survive and persist.

It appears that Jund al-Islam is seeking to take advantage of Wilayat Sinai’s mistakes affecting various segments of the local community in Sinai, including the Tirabin Bedouins and cross-border smugglers, as well as other civilians who have been victims of WS’s treatment as the de-facto governing authority. Meanwhile, organizations close to al-Qaeda present themselves not as a viceroy or governor, but as if they are part of the community, protecting its interests.

JAI is trying to attract greater support and more fighters with a somewhat less hardline rhetoric than ISIS, one that is careful not to accuse others of apostasy and to show greater tolerance towards political Islamists. JAI’s ability to make changes in the field remains dependent on the success of its media strategy, which has attempted to mobilize and recruit by taking a position hostile to both the army and ISIS. Additionally, its numbers and weapons capabilities remain limited particularly after punitive measures taken against JAI by Wilayat Sinai for failing to pledge allegiance to Abu Bakr al-Baghdadi.

Despite JAI’s hostile rhetoric towards the Egyptian army, the regime may still be thinking about leveraging its emergence to build a new strategy based on giving Jund al-Islam the opportunity to grow and clash with Wilayat Sinai to bleed both parties.

Ahmed Salem, is an independent researcher on matters of Sinai and Violent Movements, he can be followed via Twitter at: @AhmedSalem83.

Image: Photo: Christian families who left from Al-Arish in the North Sinai Governorate after the escalation of a campaign targeting Christians by Islamic State militants last week, arrive at the Evangelical Church in Ismailia, Egypt February 24, 2017. REUTERS/Ahmed Aboulenein