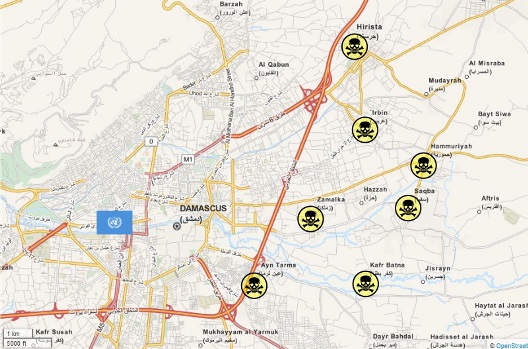 In all likelihood, the Syrian regime used chemical weapons on a large-scale last week, killing hundreds and prompting many observers to ask: With a United Nations team deployed in Damascus specifically to investigate alleged chemical weapons use, why would Bashar al-Assad’s regime so brazenly provoke a serious international backlash and possible military intervention? The confusion is understandable, but the question reveals a misunderstanding of the Syrian regime, its priorities, and its calculations.

Firstly, the Syrian regime is fighting a war for its survival, and its actions usually follow a military logic. If chemical weapons were indeed used, there was likely an important tactical consideration. Security forces had been struggling to retake rebel-held territory in Ghoutat Dimashq, east of Damascus, where the alleged attacks took place. After retaking the town of al-Qusayr in June with Hezbollah’s help, the regime was emboldened and appeared confident it had broken the rebellion’s momentum and initiative.

To its dismay, however, the insurgency adapted, improving its anti-armor capability, launching attacks in the regime heartland of northwest Syria, making gains around Damascus, and inflicting heavy regime losses in the process. With all other options exhausted—including inviting a foreign militia to fight its war—the rebel resurgence fueled the regime’s frustration and desperation. Employed effectively, chemical weapons can certainly clear areas of stubborn defenders ill-equipped for chemical warfare. The regime may have simply seen chemical warfare as a military necessity, so long as this did not provoke decisive foreign military action.

So then, what comprises the Assad regime’s foreign policy calculus? Thus far, it has gotten away with killing tens of thousands of its own citizens, including civilians, using methods just as gruesome as chemical warfare. From the door-to-door murder of families by hired thugs in the early days of the uprising, to the now-rampant throat-slitting, torture, executions, and ballistic missile strikes on densely populated civilian areas, the regime has become steeped in a culture of gratuitous violence. This has been encouraged by its allies and ignored by its most powerful enemies.

Arms and funding for rebels from Gulf Arab states cannot match Iran’s sophisticated militant proxy capability or Russia’s commitment to a regime victory. The United States has pledged to provide military assistance to rebels of its choosing, but by rebel accounts none has been received. The White House statement on the chemical weapons reports (by the Principal Deputy Press Secretary, no less) condemned the use of chemical weapons and claimed perpetrators ‘must’ be held accountable, but this seemed to indicate a wish rather than a commitment to action. Of course, President Barack Obama had already failed to respond meaningfully to the regime’s use of chemical weapons months ago. In light of all this evidence, was the Syrian regime truly foolish to assume it would go unpunished after these latest attacks?

The Syrian regime’s conduct of the war is not informed by calculation about the actions of the international community, because it correctly realizes that the concept is a fiction. There is not a community but various nations with different interests, not all of whom are relevant actors in Syria’s brutal civil war. Of the more relevant ones, namely Russia and the United States: the former fully backs the regime, while the other lacks a strategy or appetite for the Syrian conflict, and has made this clear.

It is, therefore, not at all unfathomable that the Syrian regime would conduct such a brazen attack in the presence of UN investigators. In fact, their presence may have encouraged the large-scale use of chemical weapons. If the Assad regime can get away with it under such circumstances, then it will have clearly exposed President Obama’s chemical weapons ‘red-line’ as a bluff and free it to conduct a war of annihilation against the rebels and civilians who support them or merely get in the way. Viewed thus, the alleged chemical weapons attack is an intelligent way to expose US policy in Syria as toothless.

The assertion that the Assad regime is constrained by the risk of US military action overestimates the credibility of US threats and fails to grasp the logic of violence in Syria. The Syrian regime is fighting an existential war and will use any means of its disposal to win. If it has calculated that chemical weapons warfare is a viable tool, the United States has only itself to blame and a shrinking opportunity to change this terrible calculus.